Home » Entertainment » Tanya Roberts, a Charlie’s Angel and a Bond Girl, Is Dead at 65

Tanya Roberts, a Charlie’s Angel and a Bond Girl, Is Dead at 65

Tanya Roberts, the breathy-voiced actress who found fame in the 1980s as a detective on “Charlie’s Angels” and as a brave earth scientist in the James Bond film “A View to a Kill,” died on Monday night in Los Angeles. She was 65.

Her death, at Cedars-Sinai Hospital, was confirmed on Tuesday by her companion, Lance O’Brien. Her publicist, who was given erroneous information, had announced her death to the news media early Monday, and some news organizations published obituaries about her prematurely.

The publicist, Mike Pingel, said Ms. Roberts collapsed on Dec. 24 after walking her dogs near her Hollywood Hills home and was put on a ventilator at the hospital. He did not give the cause of death, but said it was not related to Covid-19. He said she had not been noticeably ill before she collapsed.

Ms. Roberts’s big acting break came in her mid-20s, when she was cast in the fifth and last season of “Charlie’s Angels,” the ABC drama series that, trading on its stars’ sex appeal, followed the exploits of three attractive former police officers who often fought crime wearing short shorts, low-cut blouses and even bikinis.

The show was an immediate hit in 1976, but Farrah Fawcett, its breakout star, left after one season, replaced by Cheryl Ladd. Kate Jackson quit in 1979, and her replacement, Shelley Hack, was gone after just one season. Ms. Roberts replaced Ms. Hack. Jaclyn Smith appeared throughout the series run.

There were high hopes for Ms. Roberts when she joined the cast. Her character, Julie, had some of Ms. Jackson’s character’s streetwise attitude; Julie was known to knock a handgun right out of a tough criminal’s hand. Her part couldn’t save the show’s plummeting ratings, but it did lead to an active decade for her in Hollywood. 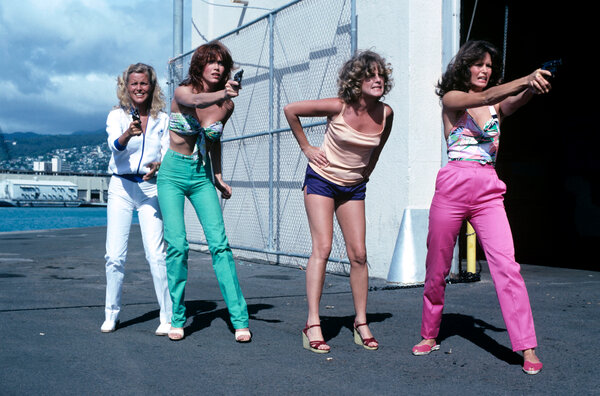 Most notably, she was a “Bond girl,” playing a geologist threatened by a microchip-monopolist madman (Christopher Walken) in “A View to a Kill” (1985), Roger Moore’s last appearance as Agent 007.

Ms. Roberts also appeared in “The Beastmaster” (1982), a fantasy film. And she played the title role in “Sheena” (1984), a highly publicized adventure film inspired by a queen-of-the-jungle comic book character. Sheena, a female Tarzan type, wore skimpy fur outfits with décolletage, rode a zebra, talked to animals and shape-shifted. The film flopped at the box office, and Ms. Roberts began fading from public view.

She returned to the spotlight in 1998 on the sitcom “That ’70s Show” as the glamorous, youngish Midwestern mom of a teenage girl (Laura Prepon). In that role she was beautiful, slim and sexy — and delightfully dimwitted. The comic mystery, year after year, was how her short, dumpy husband, played by Don Stark with frighteningly overgrown sideburns, had ever won her heart. Ms. Roberts appeared on the show for three seasons and later made guest visits.

She was born Victoria Leigh Blum in the Bronx on Oct. 15, 1955, the second of two daughters of Oscar Maximilian Blum, a fountain pen salesman, and Dorothy Leigh (Smith) Blum. According to some sources, Tanya was her nickname. She spent her childhood in the Bronx and lived briefly in Canada after her parents’ divorce. She began her career by running away from home to become a model when she was 15.

Back in New York, she studied acting, appeared in some Off Broadway productions and worked as a model and a dance instructor to make ends meet. Her modeling career included work for Clairol and Ultra-Brite toothpaste. She made her screen debut in the horror thriller “The Last Victim” (1976), about a serial rapist-murderer.

Even in her heyday, Ms. Roberts appeared not to enjoy being interviewed. Chatting with Johnny Carson on “The Tonight Show” in 1981, she laughed nervously, gave short answers and flirted with Michael Landon, her fellow guest. At one point, Mr. Carson mentioned a cover article about her in People magazine, prompting Ed McMahon, the host’s sidekick, to suggest, “Maybe there’s something in the magazine that’d be interesting.”

Ms. Roberts was a teenager when she married in 1971, but the union was quickly annulled at the insistence of her new mother-in-law. In 1974, she met Barry Roberts, a psychology student, while both were standing in line at a movie theater. They married that year. Mr. Roberts became a screenwriter and died in 2006 at 60.

In addition to Mr. O’Brien, she is survived by a sister, Barbara Chase, who was Timothy Leary’s fourth wife.

Ms. Roberts had always insisted that she was a New Yorker at heart, and not just because she hated driving.

“L.A. drives you crazy,” she said in the 1981 People magazine article. “I’m used to weather and walking and people who say what they mean.”