The Bar That Has Fed SoHo for Almost a Century

In this series for T, the author Reggie Nadelson revisits New York institutions that have defined cool for decades, from time-honored restaurants to unsung dives.

Seven years ago this fall, when Superstorm Sandy hit New York and there was no power downtown, SoHo was deserted, dark and cold. At Fanelli’s, the neighborhood cafe, though, there were candles on the bar, plenty of booze and, for as long as it lasted, food. Most important, there was company and conversation. “I was here the whole time,” says Sasha Noe, Fanelli’s owner. “Where else could I be?”

At 52, Noe, who can often be found at 6 in the morning making repairs, is hanging on to the place with determination. Born a couple of blocks away, he lives with his wife and three children in the loft on LaGuardia Place where he grew up. His father, Hans Noe, a Romanian architect, bought the building where Fanelli’s occupies the ground floor in 1982. An artist and sculptor, Sasha bussed tables and tended bar during high school. After he graduated from Bard, he came home.

[Sign up here for the T List newsletter, a weekly roundup of what T Magazine editors are noticing and coveting now.] 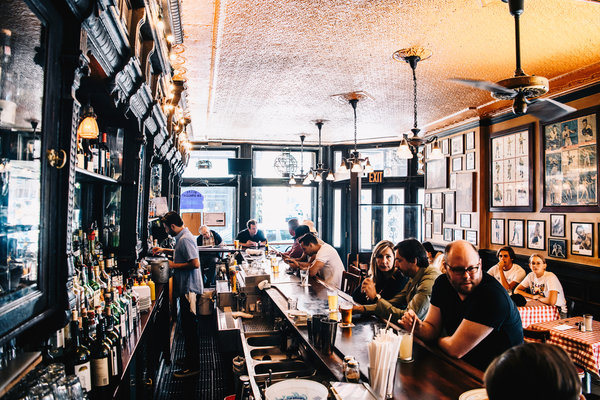 “If we don’t keep something of New York the way it was, what will our kids have?” Noe asks as he eats an onion ring.

This is the second oldest watering hole in New York. The building was erected in 1847, and the ground floor space for a while was a grocery store (when groceries sold alcohol), then from 1863, a saloon. Fanelli’s is marinated in history and nostalgia, the kind that makes New Yorkers kvetch about change, as we’ve been doing for a few hundred years: “You shoulda seen it when ….”

“It is one of the last good barrooms left in the city,” says Clare Huntington, one of the regular bartenders. People blow in from every direction to meet here at the corner of Prince and Mercer Streets (some sitting in the same seats for decades) to participate in the lost art of conversation while drinking. In the mornings, Fanelli’s is almost empty.

Beside me at the bar, early one day, a retired social worker looks at his drink. “Before I moved away from the neighborhood, I came here a lot,” he says. “I kind of miss the place. I miss New York.”

The vintage neon sign over the brick building reads FANELLI CAFE. The old wooden front door is set with engraved frosted glass. Inside is the bar itself, a long stretch of mahogany that runs almost the length of the narrow room, with its tiled floors and old three-globe chandeliers.

This is where I eat breakfast most mornings. A few other locals read the papers, sip an early cocktail or coffee, contemplate bacon and eggs or a plate of fries. One day, a regular whose garden went wild this past summer offered around bags of gorgeous ripe tomatoes and deep green cucumbers.

The huge wooden bar back is carved with a traditional rendering of the Green Man, the folkloric figure who has shown up in both secular and ecclesiastical buildings for millenniums. (You find him in a lot of English pubs, too. Kingsley Amis wrote a book in 1969 called “The Green Man” about a pagan monster.) The mirrors and bottles catch the early morning sunshine filtering in through old windows. I like being at the bar best when the TV has an old movie on and I can eat my bacon with Errol Flynn or Ronald Colman, the sound off.

Lining the opposite wall are tables covered in red and white checked cloths. On the wall itself are vintage pictures of boxers — Joe Louis, Rocky Marciano, Kid McCoy, Punchy McFarland. In the first part of the 20th century, boxing was a great working class urban sport, a way up and out. Michael Fanelli, who bought the place in 1922, had been a fighter himself.

“My Irish grandpa from the Bronx was a boxer,” adds Huntington, who’s tending bar today. Earlier, before Fanelli’s opened, she, along with a couple of other managers, Naomi and Sheena, had arrived to open up, set the tables, put the coffee on, serve breakfast. They know who wants a shot of bourbon at 10 when the place opens, who wants a grilled cheese on pita, who craves only black coffee. They tend to a cosmopolitan assortment of customers — long-term locals, artists, models, union workers, retired ad men, even medical marijuana entrepreneurs, according to Huntington. Very late, around 1 or 2 in the morning, workers from the Mercer Hotel and other local restaurants and hotels come by, footsore and thirsty.

Most of the staff has been at Fanelli’s for six, 10, 20 years. Out-of-towners get advice from them on the city. The staff, men and women, know how to deal with drunks at night. At lunch time they work the crowds, serving barbecued wings, tuna salad, BLTs, cheeseburgers and chili to the tourists, some in the back room where, before you enter, you notice words written in gold on the wooden archway: “LADIES AND GENTS SITTING ROOM.” This is a holdover from a time when it was considered improper for ladies to sit in the actual barroom.

On the wall here are framed liquor licenses that date to 1877. The burgers are good, the fish and chips superior, the soups excellent. Outside on Mercer Street, Fanelli’s maintains a soup stall overseen by the truly lovely Tatjana Asla; a model and artist, she left Los Angeles for New York. “New York feeds me, so I love feeding it,” she says. And she does. Chicken and vegetable soup for the ascetic, Moroccan lamb for the gourmet.

In the late 19th century, Fanelli’s was part of the vicious scene around Prince Street, where brothels, crime and gin joints flourished. Twentieth-century Fanelli’s served the truckers and guys who worked at local warehouses. By the 1970s, the SoHo artists had begun to replace them. Lynne Reiser, one of the earliest, recalled: “Old man Fanelli couldn’t understand what was going on because all he would ever get were the truckers. He was thinking of closing up, but then all these artists showed up and all these gals.”

Now, Fanelli’s clientele is a stew of shoppers, artists, layabouts, people who work down Mercer at Scholastic Press or across the street at the Prada flagship store. There are some panhandlers too, some guys selling homemade CDs, who are part of local life that casual visitors might not notice, or might consider an annoyance. “We look after them,” Noe says. There is always water, coffee. When Chris, a regular, pops in, a customer might offer him a cheeseburger. He grins. “Some customers buy me a steak,” he says.

“Morning is the sweetest, most local time,” Noe says. “I look at it like an old easy chair that has to be taken care of. I’m from New York and I’m not going anyplace. I could sell this building for a bundle, but why?” He looks around his bar and adds simply, “I love this place.”