Home » Entertainment » ‘The Breakfast Club’ Cast: Where Are They Now?

‘The Breakfast Club’ Cast: Where Are They Now? 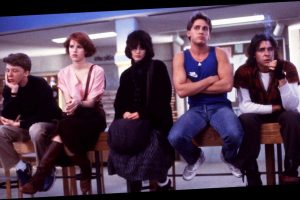 It all started with a brain, an athlete, a basket case, a princess and a criminal.

In 1985, the world was introduced to five teenagers with very different backgrounds who found themselves spending nine hours on a Saturday in detention. The success of The Breakfast Club helped make stars out of the so-called Brat Pack — Anthony Michael Hall, Emilio Estevez, Ally Sheedy, Molly Ringwald and Judd Nelson — and critics consider the teen drama to be one of director John Hughes’ best.

The movie centers on Brian Johnson (Hall), Andrew Clark (Estevez), Allison Reynolds (Sheedy), Claire Standish (Ringwald) and John Bender (Nelson) as they gather in the library of the fictional Shermer High School to serve detention from 7 a.m. to 4 p.m. on Saturday, March 24, 1984. Their tyrannical assistant principal, Richard Vernon (Paul Gleason), assigns each member of the group to write a 1,000-word essay describing “who you think you are.” He also instructs the students not to speak, leave their seats or sleep until they are released — all while regularly checking in on them.

Over the course of the 97-minute film, Brian, Andrew, Allison, Claire and John bicker, share their darkest secrets, smoke a little marijuana and ultimately become unlikely friends. In the end, they submit a single essay to the assistant principal, signed, “Sincerely yours, the Breakfast Club.”

Although The Breakfast Club was not nominated for any major awards at the time, it is widely regarded as one of the most iconic films in history. One year after the dramedy celebrated its 30th anniversary, the Library of Congress selected it for preservation in the United States National Film Registry, joining the likes of game-changers including Titanic, Toy Story, The Lion King, Forrest Gump, Schindler’s List, A League of Their Own, Goodfellas, Top Gun, Purple Rain, E.T. the Extra-Terrestrial, The Shining, Star Wars and Jaws.

Scroll down to see where the cast of The Breakfast Club is today!

In order to view the gallery, please allow Manage Cookies