“I think I’m sort of exaggerating what the author meant, but there’s a bit in there that talks about gossip as an evolutionary tool to bind people together.” The actor Adam Chanler-Berat is paraphrasing the Israeli author Yuval Noah Harari’s best-selling book “Sapiens: A Brief History of Humankind” (2011) on a bench near the entrance of Greenpoint’s Transmitter Park, a few blocks from the Brooklyn apartment he shares with his boyfriend, the actor Kyle Beltran. “In the days of cave people,” he explains, “gossip was ‘that person’s going to steal your food.’ It was useful!”

It’s natural for the subject to be on the 34-year-old’s mind because he’s just finished shooting the debut season of HBO Max’s “Gossip Girl” reboot, the first six episodes of which premiered this summer, with the rest airing in November. In line with the show’s secrets, which are disseminated via smartphones and social media, he found out about his casting when the creator, Joshua Safran, sent him a photo of his headshot on the wall of the writers’ room, along with an offer to star as a nerdy computer science teacher who helps revive the online rumor mill depicted on the original show. Though Chanler-Berat is an established stage actor, this is his first major screen role — a winking take on millennials who’ve been dethroned by a younger generation that now rules the internet they once claimed as their own. Not having auditioned, the invitation came as a surprise to the self-described “theater dweeb,” who first broke out in 2008 as the only “Next to Normal” cast member to have stayed throughout the musical’s entire original Off Broadway and Broadway runs. Since then, he has been repeatedly enlisted to help develop and refine new productions, a shrewd choice for creators looking to tap into the alchemy of intellect and emotional intuition evident in both his work and conversation. 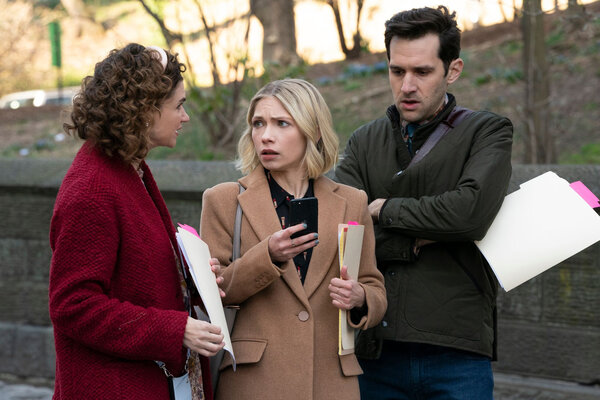 As he sees it, his “attitude has always been, ‘How do I come in and not mess things up, or get in anyone’s way?’” Lately, that has meant relaxing into being on camera, his fear of rocking the boat beginning to vanish, thanks in part to the pool of Broadway talent the series has hired. He was relieved to discover, for instance, that the 25-year-old Tavi Gevinson — with whom he had also been rehearsing for an upcoming revival of Stephen Sondheim’s “Assassins” two weeks before lockdown — would be his main scene partner on the series. The writer-actress, now his close friend, says on the phone a week later that she’s grown to become “deliriously excited” when seeing his name come up on her phone, announcing an incoming voice message, Chanler-Berat’s preferred method of communication, a fact that makes sense given his distinct cadence and tone, which call to mind both old-school elocution and the over-expressive giddiness of a lifelong theater kid. “They’re long, rambling and eloquent,” Gevinson says of the missives, “and he’ll end them with ‘But I don’t know what I’m talking about, bye!’”

Gossip keeps finding its way into his conversation — “voice messages are so versatile: better than a text, more convenient than a phone call and you can delete them when you want,” he says — but there’s no point in reading any mischief into this choice; it’s more a genuine curiosity on his part about social behaviors and the impulse to communicate. (“Connecting with people is hard and scary, and there are so many ways people try to do that. Gossip, true or not, gives you a sense of connection to the person with whom you’re sharing information.”)

This awareness of self and others, apparent in the way his eyes track the dogs mingling around him, is perhaps what led to his being cast — perfectly and, once again, without an audition — as the lead in a 2016 Boston production of Sondheim’s “Sunday in the Park With George.” The starring dual roles of Georges Seurat and his fictional great-grandson George are all about apprehension toward and disconnection from one’s work, one’s peers, one’s loved ones, one’s obsessions. Chanler-Berat, who was 30 at the time, didn’t think he’d “cracked” Sondheim (“I don’t think anyone ever has”) but believes he did what he was supposed to: “There are parts of the characters that feel like an arrested development, like angsty teens, and I think that’s what speaks to nerdy theater people about that show.” The richness of the writer-composer’s work, he says, suggests a continuum that invites performers to continually reflect on their own evolving relationship to the material. “It feels like it was somehow written for you,” he says. “Not for you to play, but for you to experience and hear. Months later, you still realize things you can’t imagine not having done in the performance.”

He doesn’t remember the first time he heard “Move On,” the musical’s transcendent ode to making peace with life’s outcomes, but it still reminds him of his late aunt Shirley Shulman, a scenic painter for New Jersey’s Bergen County Players who got him into theater at a young age, dressing him up for small performances for their family around the holidays. Later, as when he was a “socially awkward lost kitten” in middle school (he grew up in Bardonia, N.Y.), she encouraged him to gravitate toward theater people, where he eventually found a community. Despite his crisp, potent singing voice, he still experiences bouts of stage fright, but he says he is “exposure therapy-ing” his way out of it: “The more musicals I do, the more I’m like, ‘Well, I guess my voice generally shows up.’”

It’s difficult to take his modesty seriously, given that he has originated an impressive number of roles in offbeat-but-popular Broadway musicals like “Next to Normal” (2009), “Peter and the Starcatcher” (2012) and “Amélie” (2017). Each role required — and, because of his eyes’ sincerity, received — a barefaced candor not often seen in leading men. When he reunites with Gevinson for “Assassins” at New York’s Classic Stage Company in November, it will be John Doyle’s final Sondheim revival before stepping down as C.S.C.’s artistic director, following a long streak of quintessential, stripped-down revivals. Chanler-Berat will play the would-be Reagan killer John Hinckley Jr., which will require him to draw from what Gevinson describes as his ability to be “very present, while embodying someone who has a lot going on inside.” The role seems ideal for this phase of his career and his life, marrying his character actor versatility with the parasocial themes that are as prevalent on “Gossip Girl” as they are among the musical’s presidential stalkers.

Before the pandemic, Chanler-Berat’s schedule was set to involve the strenuous double duty of rehearsing and performing the psychologically demanding musical while spending long hours shooting on the “Gossip Girl” set. Subconsciously quoting the midcentury American actress Ethel Merman, who once said an eight-show-a-week musical requires living “like a [expletive] nun,” he says that such asceticism, combined with 4:30 a.m. wake-up calls — as mandated by the series’ hair and makeup sessions, protracted by Covid-19 safety protocols — would have presented an arduous reality. He trails off when thinking of this possibility, internalizing an exacting (but conquerable) challenge that would demand his inner perfectionist to simultaneously pour his all into two vastly different projects. Then he checks himself: “But that’s also the dream, are you kidding me?”