Home » Entertainment » The Moon Sits for Its Portrait

The Moon Sits for Its Portrait

Century after century, the moon adamantly refused to give up its secrets. The ancient Greeks and Romans generally considered it pristine, smooth and white, but did not have a good explanation for the dirty spots on its face that were visible to human eyes. Then, around 90 A.D., Plutarch wrote that those blemishes were the shadows of mountains and valleys and that the moon must be habitable.

By no means did everyone agree, but ignorance is seldom bliss. Faced with an unanswerable question, our species generally comes up with theories, guesses, myths and fantasies. Telescopes made viewing more precise, and photography did even better, but though no living creatures showed up, the notion that they might would not die. After World War II, one of several rumors was that the Germans had established a secret facility on the moon, and some even speculated that Hitler had faked his own death and lived out his days beneath the lunar surface.

A new exhibition, “Apollo’s Muse: The Moon in the Age of Photography,” at the Metropolitan Museum of Art, is a journey through an uncommon history, the history of representations of the moon across four centuries. This outsize and beautifully installed revelation of persistent astronomical searches is a trailblazing marriage of science and art — 300 images and objects (a telescope, a photograph used as a fire screen, two moon globes, Hasselblad cameras used by astronauts), plus film excerpts. The images shine a bright light on astronomers’ unstoppable pursuit of knowledge as well as on technological advances, artistic responses and fantasy, and also a generous serving of unabashed cuteness. The show amounts to a testament to the human drive to know and explore, and it quietly affirms the growing influence of visual representations of the moon from the invention of the telescope through the first manned moon landing 50 years ago. 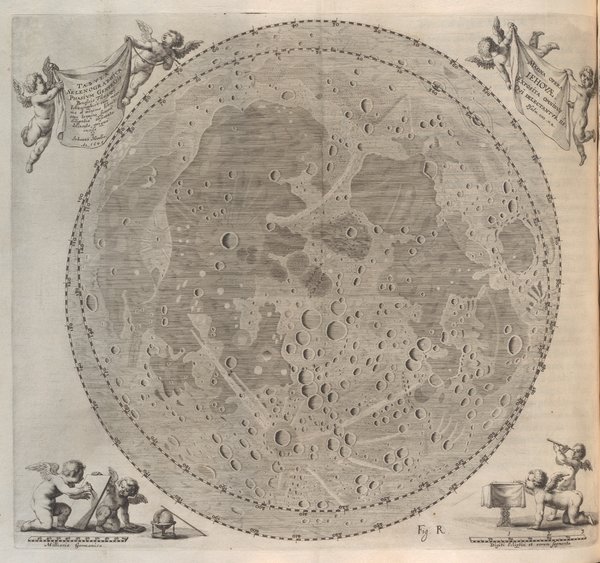 Mia Fineman, the curator in the department of photographs at the Met, organized “Apollo’s Muse” with Beth Saunders, curator and head of special collections at the Albin O. Kuhn Library and Gallery at the University of Maryland, Baltimore County, and they wrote essays for its informative catalog. (Apollo, god of the sun, never had a muse; he was leader of the nine muses. NASA, of course, wasn’t going to the sun. The moon landing project might have been named after Diana, goddess of the moon, but NASA was giving its missions only male names.)

After 1608, when the telescope was invented, the moon seemed approachable. In 1609, Galileo drew its first closely observed portraits: maps of a portion of the surface. The English mathematician and astronomer Thomas Harriot made telescopic observations a bit earlier than Galileo, but his were not published until later, and he could not explain the “strange spottedness” he saw. Galileo, expertly trained in perspective and art, realized that the “spottedness” was actually the shadows of mountains. His published drawings, two of which are included in the exhibition, represent the dawn of modern astronomy.

The 17th century brought to human vision both extremely distant and extremely tiny objects, as telescopes rapidly improved and the power of microscopes, invented at the end of the previous century, vastly increased. Accomplished artists collaborated to provide scientists and the public ever more detailed and delectable illustrations of information obtained au clair de la lune. Johannes Helvétius’s highly successful Selenography — a lunar atlas published in 1647 and named for Selene, the moon goddess in Greek mythology — is thought to be the first book entirely dedicated to the moon. Helvétius surrounded one lunar map with baroque flourishes: cherubs brandishing pronouncements, looking through telescopes or studiously drawing.

Astronomers drew what they saw; artists made the drawings better. But some images were of little use to astronomers without good scientific texts, and most were not widely seen by anyone but scientists. The French artist Claude Mellan’s 1635 engravings were not simply beautiful but also so accurate that they were not surpassed until two centuries later. In 1805, the British portraitist and amateur astronomer John Russell made a superb engraving of the moon titled “Lunar Planisphere, Flat Light,” showing the moon not as we see it but rather in flat, even light. It’s a choice that reflected Russell’s belief that an artist should “correct’’ nature in order to produce an ideal.

The idea that earth’s mysterious companion might be inhabited kept being broached by imaginative people, mistaken people and hoaxers.

The name of Sir John Herschel, a noted British astronomer, was slyly stolen in 1835 by The New York Sun for the sensational “great moon hoax,” which reported that Sir John had observed houses, roads and sophisticated cities on the lunar surface. The story was reprinted across Europe, and a wide international audience ecstatically bought both paper and hoax.

The invention of photography four years later meant that more accurate and believable imagery was about to take center stage. “Apollo’s Muse” has several of the earliest photographs of the moon, including Sir John Draper’s remarkable 1840 daguerreotype — exposure time: a half-hour. (Daguerreotypes required more light than the moon produced, hence the long exposure, during which the earth and moon both moved.) Draper’s photograph gives us a glimpse into a rare moment of double discovery, comparable to Galileo’s: a more precise understanding of the moon’s surface, and one obtained with an instrument able to see more accurately than the eye.

Until mid-19th century, photographs could be reproduced only with great difficulty, and photography by the light of the moon as the earth rotated was no mean feat, so for years the public saw less than visitors to the Met will.

The British astronomer James Nasmyth, despairing of photography’s power to capture the minutiae and three-dimensionality he saw through his scope, made detailed plaster casts. In 1874, his photographs of his artful stand-ins for the moon were published and lauded as the most “truthful” representations ever seen. So much for photography’s reputation for veracity.

In fact, photography did not simply run artistry out of town. As late as 1882, the French astronomer Étienne Léopold Trouvelot, working at the Harvard College Observatory, believed that photography had limitations that art did not. He published “The Trouvelot Astronomical Drawings Manual,” illustrated with stunningly drawn prints of craters on the moon and an eclipse of the sun. His scientific drawings were published in a large portfolio and collected; public interest in science was growing.

New and more accurate information does not always move minds. (Consider the Flat Earth Society.) Technological and scientific advances never produced evidence of lunar inhabitants, but the moon was too fascinating to be held back by mere science.

Literary voyages to our constant companion existed long before Jules Verne’s influential “From the Earth to the Moon” (1865). Illustrations included humanoids and fanciful animals, but more charming was the first science fiction movie, George Méliès’s “Le Voyage Dans la Lune” (“A Trip to the Moon”), from 1902. A group of astronomers are shot off the earth by a cannon, land smack in one of the man-in-the-moon’s eyes, and barely escape hostile natives. A colorized excerpt (as well as clips from Fritz Lang’s “Woman in the Moon,” from 1931, and Irving Pichel’s “Destination Moon,” from 1950) plays in the exhibition.

By the early 20th century, the moon had become cuddly. Portrait studios acquired sturdy, smiling crescent moons (and at least one that was implacably grumpy). Nudes, lovers, friends, families and pranksters sat on the crescent curve to be immortalized on postcards.

By the time NASA came along, the moon was a pretty serious matter again. Before the launch of Apollo 11, on July 16, 1969, cameras were surveying the moon from unmanned Lunar Orbiters, looking for a landing site. (Spy satellites had already taken photographs, and in 1966, Lunar Orbiter 1 took a picture of Earthrise two years before the astronaut William Anders took the more famous image.) Some of the photographs taken from 239,000 miles away were converted into three-dimensional moonscapes and carefully studied for a landing site, but Neil Armstrong eventually, and breathtakingly, used his eyes to find a safer landing spot than the one to which he had been directed.

The exhibition usefully supplies some Soviet propaganda photographs — the first dogs in space, the first woman in space — that were stoking popular support for their outstanding space achievements when the United States was still feverishly working to surpass them.

These proved to be forerunners to the hugely successful American public relations campaign that followed the first moon landing. Images of the Apollo 11 astronauts — Buzz Aldrin walking near the lunar module, for example, or standing by the American flag — still resonate 50 years later.

Critics initially dismissed the Apollo program as a “moondoggle.” After Apollo 11 landed, a few declared it a fake. But Americans generally saw it as an affirmation of national greatness after a decade of tragedy, upheaval and Cold War, and the whole world thrilled to this intimate encounter with the moon, which had been aloof since something like forever.

Perhaps nothing can live up to the moon landing. Less exciting is the artistic response in the last gallery of the show. In 1962, the NASA administrator James Webb and the artist James Dean founded the NASA Art Program. A NASA website suggests one reason: “An artist also could bring something that engineers and managers loathe to admit to: emotion.”

The program commissioned well-known artists including Claes Oldenburg, Robert Rauschenberg and Andy Warhol, all of whom made tiny drawings in 1969 for a small ceramic wafer that was attached to the Apollo 12 spacecraft and left on the moon. (It has become known as the Moon Museum.) Also left behind, in 1971, was Paul Van Hoeydonck’s small sculpture “Fallen Astronaut,” a replica of which is at the Met.

The space program’s impact on popular culture is represented by Harry Gordon’s “Rocket” dress (1968), which depicts an alarmingly phallic rocket exploding upward through the mannequin’s middle. Made of paper, the dress could be cut apart and displayed on a wall. And it makes clear how just about everything, including history, is grist for the commercial mill.

The American flag was planted on the moon in 1969, not to proclaim our satellite an American colony but to memorialize our achievement. A 1971 photograph by Stephen Shames of a message spray-painted on a brick wall in a vacant lot in Brooklyn says it all: “THE MOON BELONGS TO THE PEOPLE!!!”

The images collected here read like a love letter from all its ardent suitors.

Apollo’s Muse: The Moon in the Age of Photography 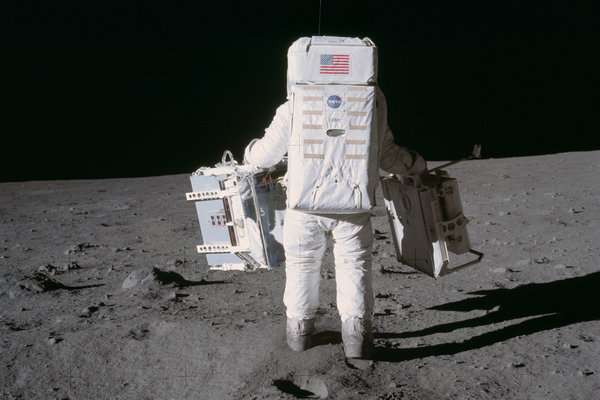 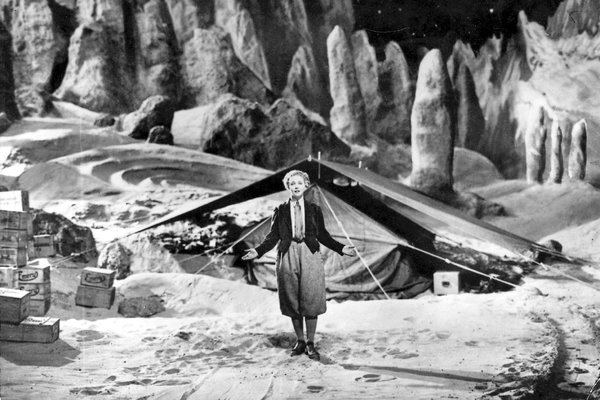 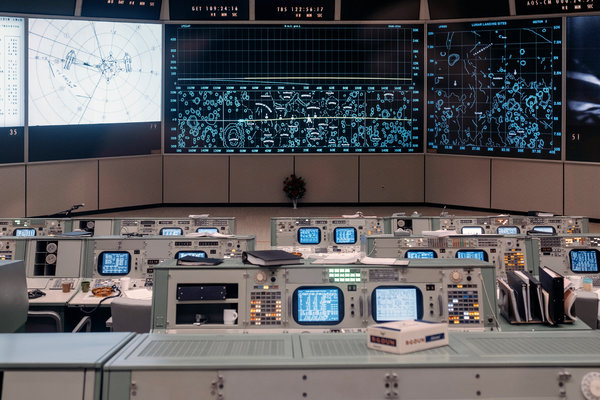