Theater audiences have become more like movie fans and television bingers: They can settle in for a double bill. Before the pandemic, they might have scheduled a matinee and evening performance back to back, but there were those pesky hours to kill in between. Now it’s possible to simply queue up a couple of streaming shows and hit play.

A natural pairing this month combines two engaging autobiographical shows written by gifted actors looking back on their childhoods. Round House Theater of Bethesda, Md., is presenting Colman Domingo’s “A Boy and His Soul,” which played Off Broadway in 2009. Domingo, who portrayed the bandleader Cutler in the film adaptation of “Ma Rainey’s Black Bottom,” looks back at his connection to music and family while growing up gay in the 1970s and ’80s in Philadelphia. This new production is the first major one in which he himself does not appear, with Ro Boddie taking on the role. Through Apr. 18; roundhousetheatre.org

Across the Potomac River, in Arlington, Va., Signature Theater is presenting “Daniel J. Watts’ The Jam: Only Child.” Under Lileana Blain-Cruz’s direction, Watts (who played Ike Turner in “Tina: The Tina Turner Musical” on Broadway) recalls growing up with his single mother in the 1980s and ’90s. The title refers to fruit spread, but sound and music energize the show, with DJ Duggz spinning onstage and acting as Watts’s occasional sidekick. Through May 7; sigtheatre.org

Along the lines of MCC Theater’s beloved “Miscast,” in which stars perform songs they would never get to sing in real shows, this Broadway Cares/Equity Fights AIDS annual fund-raising series features gender-reversed performances. This year’s concert mixes new numbers — hold on to your hats during the opener with Stephanie J. Block, Deborah Cox and Lea Salonga — with ones from previous editions, featuring the usual array of starry participants. Through April 3; broadwaycares.org

The GPO of this docudrama title refers to the General Post Office in Dublin, which was central to the 1916 Easter Rising of Irish Republicans against British rule. Created as a centennial commemoration, Fishamble’s production takes place at the actual GPO, which in 1916 had been occupied by the rebels for several days. The company is now streaming a remastered digital version in partnership with various Irish organizations around the world, including the New York Irish Center. April 1-5; newyorkirishcenter.org

The monologuist Mike Daisey returns to the stage in a new piece livestreamed from the Kraine Theater in New York — in front of an in-person, fully vaccinated audience. The title (you can guess which word was omitted) neatly encapsulates many people’s stunned take on the past year. April 2; frigid.nyc 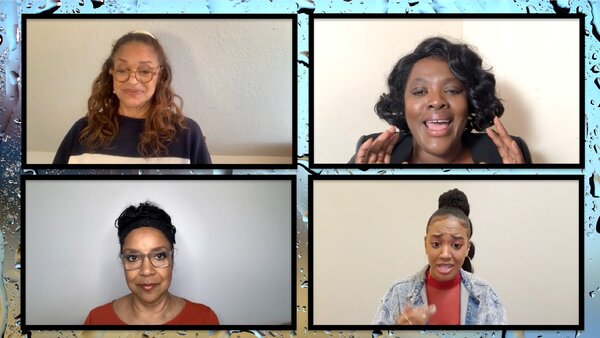 The Spotlight on Plays series has pulled off a fun feat with its latest reading, the first time the sisters Debbie Allen and Phylicia Rashad have acted together since the PBS movie “The Old Settler” 20 years ago. Rashad plays a grande dame of the stage, and Allen is her friend and director, in this 2019 comedy by Pearl Cleage (“Blues for an Alabama Sky”). April 8-12; broadwaysbestshows.com

When many theatrical institutions curled up into the equivalent of a fetal position in March 2020, some people got to work. Among them was the enterprising reading series Play-PerView, which is celebrating its one-year anniversary with a mix of new and old works. In the first category is “Babette in Retreat” by Justin Sayre, who in the past year has been cultivating a high-camp sensibility in a steady stream of comedies like “Drowsenberg,” “When Sunny Went Blue” and “The Ducks.” There should be some choice bon mots and slapstick for Becca Blackwell, Nathan Lee Graham (as the title character), Randy Harrison (“Queer as Folk”), Bradford Louryk and Mary Testa. April 10-14; play-perview.com

Randy Harrison also takes on the lead role of John in Studio Theater’s fully staged digital production of Mike Bartlett’s “Cockfight Play.” (The actual title is just one word, so use your deductive skills). John is in a relationship with M (Scott Parkinson) when he falls in love with W (Kathryn Tkel). “Love?” a startled M says. “She?” Bartlett’s deceivingly simple premise explores the vagaries of romantic attraction, and the director David Muse makes good use of a split screen to overcome the actors’ need to maintain their distance. Through Apr. 18; studiotheatre.org

Michel Legrand’s only Broadway musical was a flop, running for only 48 performances in 2002 — which is a shame because the poetic, surrealistic “Amour,” in which a civil servant realizes he can walk through walls, has plenty of the gorgeous melodies you’d expect from the French composer. Now, Art Lab and ShowTown Productions are presenting a revival starring Derrick Baskin (a Tony Award nominee for “Ain’t Too Proud: The Life and Times of the Temptations”), Drew Gehling (“Waitress”), Kara Lindsay, Adam Pascal, Christiani Pitts and Rachel York. It is high time “Amour” gets some love. April 2-4; stellartickets.com

This play with music by Idris Goodwin revolves around the relationship between a white M.C. (Michael Knowlton) and his Black hype man (Kadahj Bennett). Their friendship goes from complicated to adversarial as they react differently to a case of police brutality, while their beatmaker (Rachel Cognata) is stuck in the middle. The show ran in New York in 2018, but Company One’s version, presented by the American Repertory Theater, is freshly urgent, considering the past year’s debates around policing and the appropriation of historically Black art forms. April 8-May 8; americanrepertorytheater.org