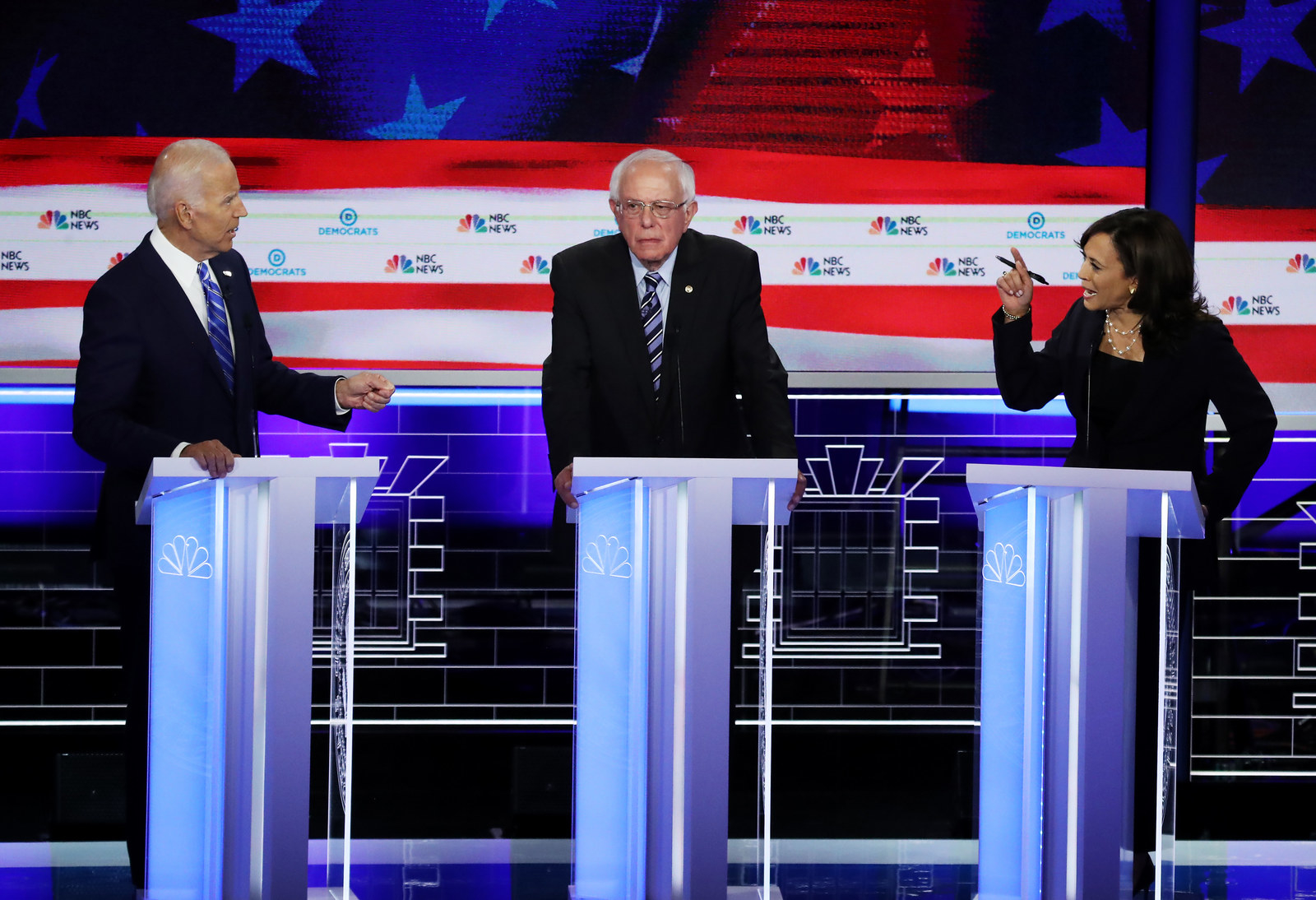 Not long after Sen. Kamala Harris challenged Joe Biden’s record on race during part two of the first Democratic debate last night, a barrage of tweets questioned her race and US citizenship. While these claims erupted into national prominence last night, in part due to a quote-tweet from Donald Trump Jr., falsehoods about her have been long simmering in fringe conspiracy and neo-Nazi circles.

Just as Barack Obama’s US citizenship and background became a full-fledged conspiracy theory — promoted at the time by Donald Trump — Harris has also been targeted with disinformation questioning her legitimacy as a US citizen and race. Obama birther conspiracy theorists and prominent neo-Nazis, including Andrew Anglin, have questioned her eligibility to run for president, and she’s been labeled an “anchor baby.”

In fact, Harris was born in Oakland to an Indian mother and Jamaican father, and is eligible to run for president.

“Seeing the tweets declaring that Kamala isn’t black enough because her parents are from Jamaica and India, I had an immediate flashback to the 2008 campaign,” Shauna Daly, who led the fight against online smears on the Obama campaign, told BuzzFeed News. That campaign faced an early wave of rumors about Obama’s race and religion, which later coalesced into false claims about the president’s birthplace whose most famous champion was Donald Trump.

The senator’s campaign didn’t comment on the claims after being contacted by BuzzFeed News. However, Harris herself is alert to the pattern and made a connection between claims made about her and Obama birtherism in a February radio interview later broadcast on CNN.

“This is the same thing they did to Barack, this is not new to us,” she said. Harris said “powerful voices trying to sow hate and division among us. And so we need to recognize when we’re being played.”

Last night’s tweets, some of which were amplified by bots and in one case by Trump Jr., gave a new level of exposure to earlier claims propagated by fringe websites and discredited figures such as Jacob Wohl and the virulent neo-Nazi Anglin.

As documented by social media researcher Caroline Orr, Harris’s presence in the debate led to an onslaught of tweets that claimed she isn’t black, was not born in the United States, and was raised in Canada. (Harris went to high school in Canada, but otherwise lived in the US.)

The sentiment that Harris is not an “American Black” was also expressed in a viral tweet — one that was briefly amplified by Trump Jr. (he later deleted his message):

The tweet’s author is Ali Alexander, who previously went by the name Ali Akba. He’s a black MAGA-world personality who launched a website for other fringe Trump supporters unable to find a home in more traditional conservative media. Alexander recently joined Jacob Wohl and Laura Loomer on their trip to Minnesota to make a film about Rep. Ilhan Omar in which they floated conspiracies about her background. Hours after sending his viral tweet, Alexander followed up with a live stream to further explain his claim.

After Alexander sent his tweet, it was soon copied word for word and tweeted by a network of bot accounts previously identified by bot researcher Josh Russel.

He said the bots often copy and repost tweets from prominent accounts on Twitter, including those from different sides of the political spectrum.

It’s unclear whether their amplification of the above tweet was done automatically, or at the direction of the unknown operator running the botnet.

Where the false claims started

The smears against Harris have been percolating since long before she announced her campaign for president earlier this year.

One of the earliest attempts to paint her as ineligible for the presidency came in 2017 from a California man who has spent years pushing the false Obama birther conspiracy. Gary Wilmot wrote the Senator a letter that year telling her she should withdraw from the race.

“In this age of Trump, where the current president was fully informed of Obama’s identity fraud and lack of constitutional eligibility in April of 2011 (just weeks prior to Obama’s forged birth certificate release), you can expect ferocious opposition from equal opportunity ‘birthers’ such as myself who only want the Constitution respected,” the letter said, in part.

The letter also says Marco Rubio and Ted Cruz “fail to meet the standard of citizenship.”

His letter was posted to the website of the American Resistance Party, which holds far-right views on immigration, abortion, and religion. Wilmot said he is unaffiliated with the party and didn’t know they published his letter before BuzzFeed News asked him about it.

Its article received more than 14,000 shares, likes, and reactions on Facebook and was tweeted more than 10,000 times, according to data from Crowdtangle, a social media analytics service.

Within 24 hours of announcing her presidential campaign this January 21, Harris was again targeted with false claims about her eligibility and citizenship.

Among the first to falsely claim that her race and parents make her ineligible to run for president after she announced her candidacy was The Daily Stormer, an openly neo-Nazi website. Its founder, Andrew Anglin, claimed that Harris is “not an American” and said she does not belong in the country.

Similar claims were echoed by Jacob Wohl, a disgraced right-wing hoaxer, who falsely tweeted on Jan. 22 that the senator “is not eligible for President.” In his tweet, Wohl misstated the requirements for American citizenship.

Along with Wohl’s tweet and the Daily Stormer’s article, the website patriots4truth.org published a post titled, “Kamala Harris is an Anchor Baby and She is not Black.” The article included an image of what it claims to be Harris’ birth certificate. BuzzFeed News could not confirm its authenticity, but even if genuine it confirms the fact that Harris was born in Oakland.

The “About” and “Contact” pages on patriots4truth.org don’t list the owner and the article containing the birth certificate did not have a byline. However, domain registration information from the website and meta data from the birth certificate both list the name Tyla Wells. Wells, who was once featured in a 40 under 40 feature by Crain’s Detroit Business, did not respond to an email or phone call from BuzzFeed News.

More on the Democratic debate