Home » What Jon M. Chu Learned From ‘Crazy Rich Asians’ To Maximize The Power Of ‘In the Heights’

What Jon M. Chu Learned From ‘Crazy Rich Asians’ To Maximize The Power Of ‘In the Heights’

On my Zoom screen, when director Jon M. Chu moved slightly to the side, I noticed that propped against the wall behind him was a set of framed magazine covers: the cast of “Crazy Rich Asians” on the cover of Entertainment Weekly, Constance Wu on the cover of Time and Henry Golding on the cover of GQ.

Chu started showing me other mementoes on his desk: a mahjong tile from one of the most climactic scenes in “Crazy Rich Asians,” and a strip of film containing the first 24 frames of his first feature film, 2008’s “Step Up 2: The Streets.”

“These things just remind me of where I’ve come from and where I’m headed,” he said. “Someone told me once: No one’s gonna buy you a trophy — you gotta keep your own trophies.”

The reminders aren’t just for himself.

That significance and visibility also guided him in his next movie, the long-awaited adaptation of Lin-Manuel Miranda and Quiara Alegría Hudes’ Tony-winning musical, which follows bodega owner Usnavi (Anthony Ramos) and his friends and neighbors in New York City’s Washington Heights during a summer heat wave, as they reflect on their dreams and ambitions.

Soon after the musical opened on Broadway in 2008, Hollywood came calling, but for years, the movie adaptation shuffled between different studios, producers and directors. At long last, it will premiere in theaters and on HBO Max on June 11, a year after the COVID-19 pandemic delayed its release date.

Like the release of “Crazy Rich Asians,” the first Hollywood studio movie in 25 years with a majority Asian cast, “In the Heights” is a long overdue landmark. It puts Latinx characters at the center of their own story in a major Hollywood movie. For years, Latinx moviegoers have had the highest per capita attendance of any ethnic group, while making up just 4.5% of speaking characters in the top-grossing movies at the box office.

Before “Crazy Rich Asians” came out in 2018, Chu and the book’s author Kevin Kwan had considered a big, enticing offer from Netflix. But recognizing the importance of giving Asian Americans a rare chance to see themselves at the center of a major movie on a giant screen, they turned it down and went with a theatrical release from Warner Bros. It was one of many lessons Chu took into making “In the Heights.”

At one point last year, he and Miranda considered putting the movie on streaming or on-demand the day of its would-be theatrical release, in order to “give this to the audience at home, when they would need the joy,” Chu recalled. 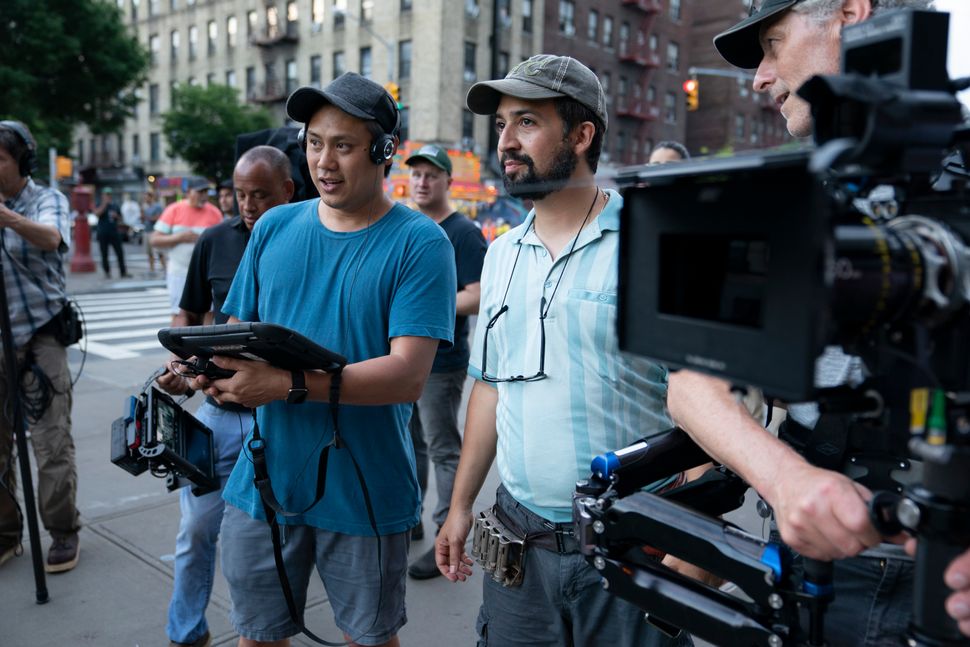 It would have been a perfectly fine choice. Many other major movies chose to go that route at the height of the pandemic, providing viewers something comforting to watch from the safety of their homes. But Chu convinced Miranda that waiting until audiences could return to theaters was vital to maximizing the movie’s power and visibility.

“Lin and I had a very hard conversation about my lessons from ‘Crazy Rich Asians,’ and I said, the giant machine of AT&T and Warner Bros. are saying that these people are worth you seeing, and they’re beautiful and they’re valuable …and you need to take time out of your day and put down your phone to pay attention to them — oh, and pay money to see them,” Chu said. “I just know the power of that. And bigger than the movie itself, these actors that are now going to become movie stars — that Anthony Ramos is now going to be the lead of a Transformers movie, and Leslie Grace, and Melissa Barrera, and Corey [Hawkins], and Daphne [Rubin-Vega], and Olga [Merediz], they’re gonna now make whole new lanes that so many people can follow in their footsteps — that is the real power.”

It’s a reminder that representation takes on so many forms, such as the wider cultural visibility that extends from the release of a major movie: magazine covers, TV commercials, merchandising, red carpets and awards.

“It’s not just the movie itself,” Chu said. “It’s the whole thing: Be on the cover of magazines, go host that thing. That is the true change that I saw ‘Crazy Rich Asians’ do.”

Thankfully, the release of “In the Heights” is coming at a time when its cast and crew can finally gather again and hold a celebration befitting the movie, which is full of joy. On June 9, “In the Heights” will have its world premiere at New York’s Tribeca Film Festival, at the United Palace theater in Washington Heights, bringing the movie home to where it takes place and was filmed.

Chu is so thrilled to finally get the movie out into the world that he even admitted he was excited about long days of Zoom interviews with reporters.

“I’m trying to savor every day of this,” he said. “Usually talking gets exhausting, but I can’t get enough of it.”

It’s hard not to sound hyperbolic when describing how jubilant and celebratory the movie is, and how it could not have come at a better time. Even while watching the movie alone in my apartment, I felt like getting up and dancing. There are ambitious and impressive musical numbers, a bright and vibrant color palette, as well as choreography that Chu said is less traditional Broadway and more street dance culture, in which he has a lot of experience from his previous feature films, music documentaries and music videos.

Hudes described Chu’s vision and ambition for “In the Heights” as “really making it as Hollywood and cinematic as possible, a real sense of pride and arrival for Latinos in Hollywood.”

Chu said it was less of an explicit mission statement, and more of just a desire to treat each character’s dreams and yearning “as big as any big, epic movie.”

“The ending shot of the opening number: Usually, a musical number pulls back, and you see the whole street,” Chu said. “In our version, we start with the whole street. We push in, and we could pick anybody on this block. We’re gonna pick this guy who owns this bodega on the corner, and we’re gonna say his struggles and his conflicts and his hopes are bigger than [those of] any main character in a movie that you’ve ever seen.”

For a long time, Hollywood executives operated with the myth that major movies by and about people of color wouldn’t sell. Over the years, movie after movie, including “Crazy Rich Asians,” which became the highest-grossing romantic comedy in a decade, have helped chisel away that myth. But the list of movies is still relatively short, reflecting the often glacial pace of change in Hollywood. There’s still a lot of undue pressure for each individual movie to succeed because so often, filmmakers of color aren’t given another shot.

Like with “Crazy Rich Asians,” Chu wants “In the Heights” to “be one of many, if we do our job right.” Thinking about it that way, he says, helps the weight of expectations feel a bit more manageable.

“We all feel the pressure, and it’s good to feel pressure. I’m down with the pressure. But day one, we say, throw it all away. Let’s make a great movie. Let’s entertain the hell out of this audience,” he said. “If you show them beauty, and you show them love, joy, all the things that we need and want in our life, and you show them that they’re not alone, the audience will be there. Whether they pay money and get there opening weekend, or get there over time — like, that’s not up to me, so we’ll just do the best we can.”