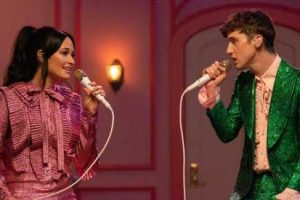 THE KACEY MUSGRAVES CHRISTMAS SHOW Stream on Amazon. Kacey Musgraves is an artist who can create her own psychedelic, technicolor world inspired by sepia-tone, classic country music. That’s the conceit behind this Christmas special, which pays tribute to holiday variety shows of the past hosted by Bing Crosby, Johnny Cash and the Carpenters. Musgraves has tapped an all-star cast that includes Dan Levy of “Schitt’s Creek,” Kendall Jenner and the Radio City Rockettes to help her bring her 2016 Christmas album “A Very Kacey Christmas” to life. Leon Bridges, Camila Cabello, Lana Del Rey, James Corden and Zooey Deschanel stop by to perform songs from that album and the Christmas canon with Musgraves, while Troye Sivan joins the singer in the debut of a new collaboration called “Glittery.” Even Musgraves’s grandmother Nana stops by to spread some Christmas cheer.

MIDSOMER MURDERS Stream on Acorn TVand BritBox. Despite the best efforts of Detective Chief Inspector John Barnaby (Neil Dudgeon) and Detective Sergeant Winter (Nick Hendrix), the murder rate in the fictional English county of Midsomer just keeps climbing. The 21st season of this show takes the detectives into the worlds of beekeeping, competitive dance contests, miniature doll houses and a rivalry between fishermen and mud runners to uncover the villagers’ secrets, passions and jealousies that boil over into foul play.

I LOST MY BODY (2019) Stream on Netflix. Part love story, part adventure odyssey, this imaginative animated feature tells the outlandish tale of a young man living in Paris whose hand gets mysteriously severed from his body. In one timeline told through flashbacks, Naoufel, a pizza delivery driver, works to change his life after meeting a librarian named Gabrielle. The more macabre present sees the severed appendage embarking on a journey to reconnect with its owner. The director Jérémy Clapin “shoots the hand as if it could see, frequently animating it scuttling on the ground to emphasize its smallness and its vulnerability in a hostile world,” Teo Bugbee wrote in her review for The New York Times. “The hand takes on pigeons, rats and cars in its journey back to Naoufel’s body, and the breakneck pace of these scenes contributes to the sensory overload in which every new image presents a fresh reason to recoil.”

APOLLO 11 (2019) 9 p.m. on CNN. Sourced almost entirely from rediscovered archival footage and around 11,000 hours of audio recordings, this documentary offers an intimate look behind the scenes of the first successful lunar mission. Additionally, the director, Todd Douglas Miller, “uses simple but effective white-on-black graphics, graphic animations and, occasionally, footage set up in split-screen to highlight particularly harrowing maneuvers, to convey the complications of the actions the Apollo 11 crew had to so precisely execute,” A.O. Scott wrote in his New York Times review. “The impact is nearly mind-boggling.”