Between network, cable and streaming, the modern television landscape is a vast one. Here are some of the shows, specials and movies coming to TV this week, Dec. 28-Jan. 3. Details and times are subject to change.

A CHUMP AT OXFORD (1940) 8 p.m. on TCM. Here’s a summary of an early scene from this black-and-white comedy: As part of a moneymaking scheme, Stan and Ollie (the recurring characters played by Stan Laurel and Oliver Hardy) pose as a maid and butler at a banquet. Ollie pops a bottle of champagne. He loses control of the cork, which flies into the host’s glass. The host eats the cork. Then Stan walks in dressed in underwear, because the host had asked him to serve salad “without any dressing.” The host runs to the kitchen, grabs a shotgun, and chases Stan and Ollie out of the house. This all happens in under two minutes. There are plenty more gags where those came from, both in the rest of “A Chump at Oxford” (the plot eventually finds Stan and Ollie among English academics) and in the many other Laurel and Hardy films that TCM is showing back-to-back on Monday, from the early afternoon through the night. These include TOWED IN A HOLE (1932) at 2:40 p.m., BUSY BODIES (1933) at 4:15 p.m. and TIT FOR TAT (1935) at 6:45 p.m., which find Laurel and Hardy trying their hand at fishing, laboring in a sawmill and opening an electrical repair business.

THE YEAR: 2020 9 p.m. on ABC. For the past decade, ABC has aired annual editions of “The Year,” a program that does exactly what it sounds like it would: It looks back at the events of a given year. The 2020 edition, hosted by the journalist Robin Roberts, gathers a roster of guest commentators including the actors Eugene Levy and Kal Penn; the former N.F.L. linebacker Emmanuel Acho; and the country singer Brad Paisley. Given that it will be covering the events of 2020, the special should give Roland Emmerichs’ 2004 disaster thriller THE DAY AFTER TOMORROW (airing at 9:30 p.m. on Syfy), a run for its apocalyptic money. 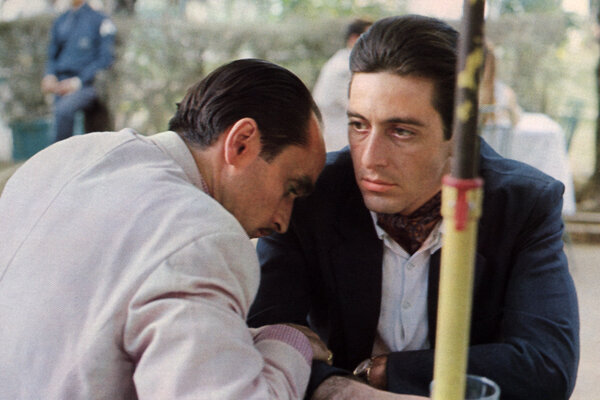 THE GODFATHER (1972) and THE GODFATHER PART II (1974) 5:30 p.m. and 9:30 p.m. on AMC. In a recent interview with The New York Times, the director Francis Ford Coppola recounted the philosophy that the film studio Paramount had after the first “Godfather” became a hit: “You’ve got Coca-Cola, why not make more Coca-Cola?” Coppola ended up making more of a Pepsi with “Part II”: Similar yet distinctive, with popular opinion split regarding which is the greater product. Wednesday night’s double feature on AMC is a timely opportunity to see both films before watching Coppola’s newly re-edited cut of the third movie, “Mario Puzo’s The Godfather, Coda: The Death of Michael Corleone,” which is now available for purchase and rental on digital platforms.

UNITED IN SONG: CELEBRATING THE RESILIENCE OF AMERICA 8 p.m. on PBS (check local listings). Patti LaBelle, Yo-Yo Ma, Audra McDonald, Joshua Bell, Renée Fleming, Denyce Graves, Josh Groban and other performers appear in this prerecorded New Years Eve special, which was shot at the Mount Vernon historical landmark in Virginia and at the Kennedy Center in Washington. The show begins with LaBelle performing “Lady Marmalade” in front of George Washington’s Mount Vernon mansion, with members of the American Pops Orchestra playing behind her, masked.

RUPAUL’S DRAG RACE 8 p.m. on VH1. The New Year is guaranteed to get off to a challenging start, but at least there’s the debut of a new season of “RuPaul’s Drag Race” to add a potpourri of positivity to New Year’s Day. The competition show’s 13th season kicks off with a new group of drag queens. Their first challenge involves intense lip-syncing.

21 BRIDGES (2019) 11:15 p.m. on Showtime. The just-released film adaptation of the August Wilson play “Ma Rainey’s Black Bottom,” with Chadwick Boseman, takes place almost entirely within the confines of a single building. In “21 Bridges,” a crime thriller directed by Brian Kirk, Boseman has the entirety of Manhattan as his stage. Boseman plays Davis, a New York homicide detective tasked with catching a group of cop killers. To do that, Davis orders a blockade of Manhattan — turning that most famous of melting pots into a deadly pressure cooker in the process. “It’s a big, blunt, battering ram of a movie, but it’s not dumb,” Jeannette Catsoulis wrote in her review for The Times. “The stunts are sharply executed, the actors (including Sienna Miller and J.K. Simmons) unimpeachable and Paul Cameron’s lively camera turns the streets of Philadelphia into a credible-enough Manhattan.”

JIMMY CARTER, ROCK & ROLL PRESIDENT (2020) 9 p.m. on CNN. At one point in this novel political documentary, the 39th president of the United States discloses, with a mischievous smile, this information: one of his sons smoked marijuana with Willie Nelson at the White House. Directed by Mary Wharton, the documentary offers a strange brew of government and culture, looking at Jimmy Carter’s love of rock ’n’ roll music and how Carter used rock as a political tool (the Nelson anecdote is typical of the film). Contemporary interviews with Nelson, Bob Dylan, Bono, Nile Rodgers and several other rock stars combine with Carter’s own recollections to make an “engaging” documentary, Glenn Kenny wrote in his review for The Times. Wharton “makes good on her hook,” he wrote.

MASTERPIECE: ELIZABETH IS MISSING 9 p.m. on PBS (check local listings). Glenda Jackson stars in this film adaptation of a novel by Emma Healey. Jackson plays Maud, an aging grandmother trying to track down her missing friend. That premise could have made for a straightforward mystery-thriller, but for this detail: Maud is struggling with dementia. So her search becomes something more.