On April 6, 1971, a balmy spring day in New Haven, Conn., I arrived at the main building of the Yale School of Music a little late for a piano lesson. But I stopped at the front door. Someone had tacked up a small white note card: “Igor Stravinsky died today.”

Those four words staggered me. Stravinsky had been central to the entire span of 20th-century music thus far. His “Rite of Spring,” from 1913, had been part of the creation of modernism — what seemed like ancient history. Yet in an analysis class that very semester in 1971, we were studying the score of what was still quite a new piece — his extraordinary “Requiem Canticles,” from 1966 — trying to understand the ways he had adapted 12-tone technique to his own ends. He seemed almost to embody the entirety of modern music and its various styles. What would happen now that he was gone?

I’d been a Stravinsky fan since my early teens, when I listened over and over to the recording he conducted of his “Firebird.” The closest I came to him in person was in the spring of 1966. I had just graduated from high school and was attending all the programs of a Stravinsky festival presented by the New York Philharmonic. The final concert ended with the composer leading a performance of his “Symphony of Psalms.” I can’t tell you how many musicians I’ve met since then who have envied me for being there that day.

Stravinsky was in the audience for the first program, which was conducted by Leonard Bernstein and ended with “The Rite of Spring.” Even today, that piece still has the power to shock. Back then, when it was not as familiar, the music seemed truly mind-blowing, especially in Bernstein’s mysterious and volcanic, yet somehow cohesive and eerily beautiful performance.

During the ovation, Stravinsky, who was seated at the front of the first tier, stood up, smiled and gestured his thanks to Bernstein and the orchestra musicians. During intermission he had remained in his seat, and ushers kept students like me away. But I got close enough to wave at him eagerly; I think he saw me.

Stravinsky and Bernstein were linked in my mind: the world’s greatest living composer and his greatest (and certainly most famous) champion. That reputation has lingered: To commemorate the 50th anniversary of Stravinsky’s death, Sony has released a box set pairing these two artists.

Yet Bernstein’s Stravinsky discography is actually frustratingly small; the Sony set contains only six discs. Even in the concert hall, Bernstein did not conduct the range of Stravinsky works he might have — unlike the comprehensive approach he took to, for example, the symphonies of Mahler. 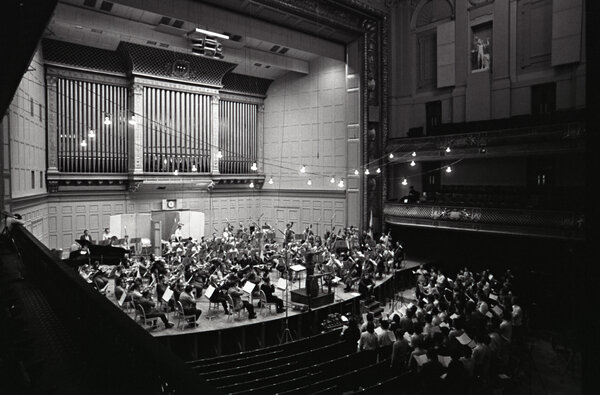 Starting in the 1950s, when Stravinsky was still a challenging composer for most audiences, Bernstein led accounts of pieces that clearly compelled him, especially the “The Rite of Spring” and “The Firebird,” as well as seminal works from Stravinsky’s Neo-Classical period, like Symphony in Three Movements, the Concerto for Piano and Wind Instruments, Symphony of Psalms and more.

The “Rite,” Bernstein’s signature piece, kept turning up, even on one of his Philharmonic Young People’s Concerts, in 1958, which opened with Haydn’s Symphony No. 104, followed by the Stravinsky. Bernstein must have thought that you might as well start students early on the “Rite” and show them what “classical” music could really sound like. Can you imagine that being presented as an educational program today?

A couple of the recordings in the Sony set are classics, including two accounts of the “Rite”: Bernstein’s original 1958 version with the Philharmonic, and his reconsidered, still molten, yet more weighty and heaving account from 1972 with the London Symphony Orchestra.

The revelation, for me, is a disc that pairs two lesser-known recordings: “Symphony of Psalms,” from 1972, with the London Symphony Orchestra and the English Bach Festival Chorus, and the opera-oratorio “Oedipus Rex,” recorded later that year with the Boston Symphony Orchestra, some excellent singers (including the tenor René Kollo as Oedipus and the mezzo-soprano Tatiana Troyanos as Jocasta) and the Harvard Glee Club. That “Oedipus” was recorded at Symphony Hall in Boston, in conjunction with the Norton Lectures that Bernstein delivered at Harvard in 1973.

In the sixth and final of those lectures, “The Poetry of Earth,” Bernstein discusses the intentional stylistic incongruities in Stravinsky’s Neo-Classical works, singling out “Symphony of Psalms,” scored unusually for four-part chorus and an orchestra with just lower strings (no violins or violas), woodwinds (except for clarinets), brass and percussion, including two pianos. The chorus sings Latin versions of three psalm texts; the music looks back to the heritage of sacred vocal works, yet through an austere contemporary prism. The first movement, a setting of verses from Psalm 38 (“Hear my prayer, O Lord”), is a “prayer with teeth in it, a prayer made of steel,” Bernstein said in his lecture. “It violates our expectations, shatters us with its irony.”

Bernstein brings those qualities to life in his recording, right from what he called the “brusque, startling, pistol-shot of a chord” that opens the movement, immediately followed by “some kind of Bachian finger exercises.” The tempo is daringly reined in. The instrumental textures are dark and weighty, yet remain dry and lucid. The choristers sound solemn and stoic on the surface, but a pleading, almost desperate edge to their singing comes through.

The whole performance evolves in this manner, with Bernstein focusing on Stravinsky’s tart, hard-edge harmonies, even in the gravely beautiful slow second movement. Stravinsky’s counterintuitive choral setting of the word “alleluia,” which opens the third movement with chords that sound yearning and almost hopeless, comes across with affecting poignancy. At first I thought Bernstein might have gone too far with his approach — that the performance overall comes close to plodding. Not so. It’s now my favorite version.

Bernstein made the “Oedipus Rex” recording essentially so that he could use it to demonstrate some points in that final Norton lecture about stylistic misalliances. He argued that in composing this take on ancient Greek tragedy — which uses a Latin translation of Jean Cocteau’s French version — Stravinsky somehow found resonances with Verdi, specifically “Aida.” That might seem incongruous, Bernstein said. But what matters, he went on to explain, was that somewhere deep in Stravinsky’s consciousness “the basic metaphor contained in ‘Aida’ registered, stuck, and connected with the corresponding deep metaphor in ‘Oedipus Rex.’”

The “Oedipus” score begins with a four-note motif, thickly harmonized by chorus and orchestra, in which the people of Thebes implore Oedipus to save the city from a deadly plague. Bernstein, in his lecture, convincingly links that motif to a pleading phrase sung by Aida, beseeching the princess Amneris, her captor and rival in love, to have pity on her.

Bernstein’s performance of this opening blast is emphatic and anguished, and significantly slower than in Stravinsky’s own recording. Bernstein maintains that grave tone throughout the score, making the most of the passages with winding Verdian lyricism; juicing every crunchy chord; and, when called for, letting the chorus and orchestra flail away with clipped rhythmic intensity.

The Sony box also offers bracingly crisp performances of the chamber work “L’Histoire du Soldat” and the Octet for Wind Instruments, which Bernstein recorded with players from the Boston Symphony Orchestra in 1947. I also love the accounts of the Concerto for Piano and Wind Instruments, with Seymour Lipkin as the piano soloist, and “Petrushka” (the 1947 version) with the New York Philharmonic. (As a bonus, there is also a recording of Bernstein discussing Stravinsky and his “Petrushka” ballet.)

As it turned out, my last direct encounter with Bernstein also involved the “Rite.” In the summer of 1987 at Tanglewood, three years before his death, he spent a week rehearsing a large orchestra of college-age players for a performance of the piece. Though the rehearsals were closed to the public, I was then a freelance critic at The Boston Globe and was permitted to watch. At times I even sat onstage, behind the players, so I could see Bernstein as he faced them.

These gifted young artists could barely believe that the most celebrated classical musician in the world was teaching them — and this, of all pieces. Though he was infamous for being overly emotional, a gusher of enthusiasm, Bernstein in rehearsal was precise, exacting and impressively specific with his descriptions of the music. In one restless passage for the bassoons, Bernstein found the playing too jittery and playful.

“It’s not a fanfare,” he said. “Ever heard a Russian choir singing in elongated notes?”

That was the deep, resonant sound and character that he wanted. And the players got it. During the “Spring Rounds” section, he said that the music had to be “an assortment of groans and wails and troll sounds.” His words elicited collective nods, and the orchestra’s playing came alive. It was ominous and wild, without a trace of caricature.