Home » Entertainment » Why Philip Guston Can Still Provoke Such Furor, and Passion

Why Philip Guston Can Still Provoke Such Furor, and Passion

Last week, a handful of museums decided to postpone a retrospective of the painter Philip Guston over concerns that Ku Klux Klan imagery in his work, intended to criticize racism, anti-Semitism and bigotry, would upset viewers or that the works would be “misinterpreted.” On Wednesday, a letter drafted by the art critic Barry Schwabsky, addressed to those museums — the National Gallery of Art in Washington; Museum of Fine Arts, Boston; Museum of Fine Arts, Houston; and Tate Modern, London — and signed by nearly 100 artists, writers and curators, was published by the Brooklyn Rail, protesting the postponement. To date, more than 2,000 names have been added — young and old, Black, Asian, Persian, Arab, L.G.B.T.Q.

For people outside the art world, however, the question remains: Who is Philip Guston and why did this postponement (already delayed by Covid-19) raise such a furor? 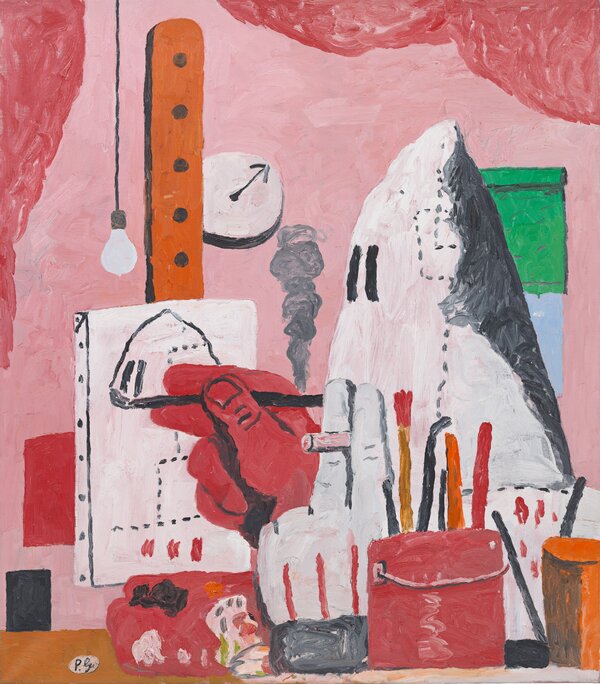 The simple answer is that Guston (1913-1980) was an artist’s artist. The influence of his deceptively simple subjects and emphatic brush strokes still ripples through the work of many painters who signed the letter: Henry Taylor, Ellen Gallagher, Nicole Eisenman, Amy Sillman, Mickalene Thomas, Peter Doig and others. Guston’s enduring influence was also evident in his lifetime. He was famous in the 1940s, but exerted a large influence in the 1970s. Moreover, part of the reason he is embraced by artists in the current moment is that he stood up to the bullies in the art world who wanted art to be a certain way — notably writers like Clement Greenberg, one of the most influential art critics of the 20th century, who thought that serious, modern painting should be abstract, rather than representing humans, landscapes or still lifes.

Born in Montreal in 1913 to Russian Jewish emigres, Guston moved with his family to Los Angeles in 1919. He attended the same Los Angeles high school as Jackson Pollock, who would become a friend, and in the 1920s and ’30s was captivated by Mexican art, Picasso and Cubism introduced to him by a high school teacher. (In 1936, he and Pollock made a pilgrimage to New Hampshire to see the Mexican muralist José Clemente Orozco’s graphic new 24-panel mural “The Epic of American Civilization” in the Baker-Berry Library at Dartmouth College.) His childhood was marked, however, by the suicide of his father, who hanged himself on the back porch of their house. (Another tragedy occurred in 1932, when Guston’s brother died after being crushed by his own car.)

The specter of violence hangs over Guston’s early work — although it is often the politically incited conflict of the period. In 1932 Guston and some friends painted murals for a local John Reed Club in Los Angeles — part of a group of Communist clubs started by New York writers for the journal New Masses. The subject of the fresco murals was the Scottsboro Boys, nine young Black men falsely accused of a rape in Alabama and sentenced to death. However, the murals were vandalized by a band of raiders known as the Red Squad who went after Communists and strikers, a unit associated with the Los Angeles Police Department, according to the National Gallery’s Guston catalog. They entered the club with pipes and guns.

In 1934, with the artists Reuben Kadish and Jules Langsner, and arranged by the famed Mexican muralist David Alfaro Siqueiros, Guston began “The Struggle Against Terrorism” (1934-35). This fresco in Morelia, Mexico, which depicts tyranny from the Spanish Inquisition to 1930s Fascism, includes the hooded figures that became a lifelong symbol of bigotry for the artist. Guston later created the disturbing “Bombardment” (1937), a maelstrom of figures, one with a gas mask, that he painted after reading a newspaper article about the atrocities carried out during the Spanish Civil War.

Then, over the next decade, Guston began to switch gears, a new recruit from figurative work to full-blown abstraction. His paintings from the late ’40s — around the time his friends Pollock, Mark Rothko and Willem de Kooning were developing their signature abstract styles — carried titles like “The Tormentors” (1947-48), but the human figures were becoming geometric shapes and merging with the background.

It would be another few years until Guston had his first exhibition of completely abstract works in New York — no human figures, no objects in sight, marked by clusters of color at their centers. In works like “Voyage” (1956) or “Native’s Return” (1957), urgent brush strokes coalesce into hovering almost-orbs that dominate the painting. In his 40s he was fighting battles with his own mental health as well as the long arm of Western art history from the Renaissance to de Kooning.

Then, still another shift, back toward representing objects and people. Human heads slowly started returning to his paintings, as in “Painter” (1959), which served as a kind of abstract self-portrait. It would take the spring and summer of 1968, after the assassinations of Martin Luther King Jr. and Robert F. Kennedy, and the attacks by police and National Guardsmen on crowds outside the Democratic Convention, to push Guston over the edge. “I got sick and tired of all that Purity!” he said in a 1977 interview, referring to abstraction. “Wanted to tell Stories!”

In paintings like “Bad Habits” (1970), with its crudely drawn hooded goons in a dungeonlike space — one of them brandishing a whip or some other torture device — Guston showed a return to his obsessions of the ’30s; they demonstrate how our civilization’s “bad habits” (violence, racism, oppression) had hardly disappeared in the ensuing decades. Guston could turn the brush on himself, as well, in works like “The Studio” (1969), where a silent hooded figure paints a self-portrait suggesting the racism ingrained in all of us. The artist Glenn Ligon offers a more sympathetic reading of this painting in the National Gallery’s exhibition catalog; however, he writes, “The comedian George Carlin once said, ‘The reason they call it the “American Dream” is because you have to be asleep to believe in it.’”

“Guston’s ‘hood’ paintings, with their ambiguous narratives and incendiary subject matter, are not asleep,” Mr. Ligon goes on. “They’re woke.”

Along with the return of figures and the hoods — now drawn in a crude, cartoonish fashion that shocked even his peers in the early ’70s — Guston continued to paint ordinary objects: shoes, cans, clocks and bricks that asserted both the materiality and everydayness of painting. The critic Harold Rosenberg called his later work “a liberation from detachment” — which is to say, it was unafraid to address messy politics, the body, failure, or the changes an artist goes through in his lifetime.

And this is why artists have rallied behind Guston: They see an ally in his work, a dedication to craft and self-reflection — but also a model of courage and liberation in the face of oppression, whether in the art world or beyond.