Home » Entertainment » With a Beloved Cafe Threatened, Broadway Stars Put on a Show

With a Beloved Cafe Threatened, Broadway Stars Put on a Show

When Tom D’Angora got the news that the West Bank Cafe — a popular show business hangout whose basement theater hosted the first “Sunday in the Park With George” rehearsals and Joan Rivers’s final performance — was in danger of closing, he sprang into action.

“You’re not closing,” D’Angora, a theater producer, told the restaurant’s owner, Steve Olsen, in an early December text. “Over my dead body.”

But Olsen could see no way out: His outdoor dining revenue had dropped to almost nothing since Thanksgiving as temperatures plunged, and, even before the city moved to ban indoor dining, his new air filters and constant cleaning efforts had failed to draw many eaters into the 42-year-old restaurant. He was already thinking about how to empty out the space, and considering where to put the artwork.

D’Angora wouldn’t hear of it. He and his husband, Michael, a fellow producer, put their heads together about trying to save the restaurant, a Hell’s Kitchen mainstay on 42nd Street just west of Ninth Avenue. 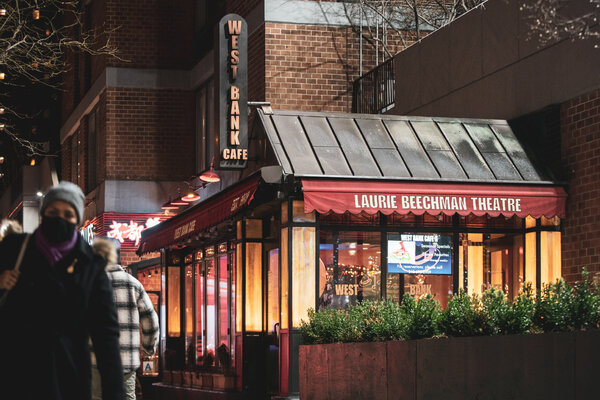 “I was like, ‘Between the six billion famous, talented, brilliant people who also love this place, we're going to figure this out,’” D’Angora said.

The actor Tim Guinee overheard their conversation while picking up an order of chicken enchiladas at the restaurant, and together they came up with the idea for a virtual Christmas Day telethon that would feature musical performances, skits and West Bank Cafe stories from as many actors as they could find. In the meantime, D’Angora created a GoFundMe page, and within 10 days, more than 1,400 donors had raised more than $168,000 of the $250,000 goal.

“We’d seen ‘It’s a Wonderful Life,’” D’Angora said, referring to the film in a which a community comes together to save an endangered family banking business. “And we just told Steve, ‘OK, it’s your George Bailey moment.’”

Broderick, the star of “The Producers” and “Ferris Bueller’s Day Off” and a cafe regular, said he was sad to see another New York City business with a rich history on the verge of closing forever.

“There are whole swaths of places that have closed since March, not just in Hell’s Kitchen or Times Square, but everywhere,” said Broderick. “It’s terrifying. These places are what make New York New York.”

Broadway stars including André De Shields and Nathan Lane have gathered at the restaurant to celebrate Tony Award wins and commiserate over losses, and Bruce Willis, Tennessee Williams and Arthur Miller all dined there.

The cafe’s 100-seat basement theater, which opened in 1983, a few years after the restaurant, has had its own memorable moments: Warren Leight’s Tony Award-winning play “Side Man” had its debut there, Lewis Black spent more than 10 years as its playwright in residence, and it staged early Aaron Sorkin plays and occasional drag shows.

Olsen, 66, has spent his entire adult life running the restaurant, which he opened in 1978 in a Hell’s Kitchen neighborhood that was still considerably grittier, and more dangerous, than it is today. “This location was considered Siberia,” Olsen said. “42nd Street and Ninth Avenue was as far west as anyone was willing to venture.”

Members of an Irish gang, the Westies, were among the fledgling restaurant’s clientele. He resisted pressure to hire one of their men as a bartender, and to bring in their female friends as waitresses. “Everyone said it was because I was courageous,” he said, laughing. “But I just didn’t know. I was in my early 20s. I was immortal.”

When Broadway theaters shut down in March, D’Angora remembered, Olsen was the one worrying about his clientele. “He was concerned about how I was holding up,” D’Angora said. “He’d hand me a bottle of champagne or wine. He was never worried about himself.”

Now that clientele wants to return the favor. After closing the second week of March and laying off all but six of his 53 employees, Olsen reopened with outdoor dining last summer. The restaurant also began delivering out of the neighborhood, which brought in a few thousand dollars a week. “I was making deliveries down to TriBeCa in eight minutes,” Olsen said. “There were no cars on the streets. I racked up four speeding tickets from the cameras in the first three months.”

“But after Thanksgiving, business went down to nothing,” he said. “I don’t know very many people who can put up $10,000 a week indefinitely to keep a business going out of their own pocket.”

Olsen said the $250,000 goal for the GoFundMe campaign would pay off the debt the restaurant has taken on because of the pandemic, and make a dent in some of their future expenses to help them get back on their feet in the spring. “At first, I was a little bit embarrassed to admit I needed help,” he said. “But my family and friends have stepped up, and I’m grateful.”

He’s given himself some homework. “I owe the 1,400 people who’ve donated so far thank you letters,” he said. “Those will come out — individually — after the holidays.”