The Flemish Revival mansion featured in Wes Anderson‘s 2001 American comedy-drama film The Royal Tenenbaums is now available for rent in New York City. Listed for the first time since 1999, a stay in the the townhouse costs $20,000 USD per month.

Designed by Adolph Hoak in 1899, the 6,000-square-foot house is located on the corner of 144th Street and Convent Avenue in Harlem’s Hamilton Heights neighborhood. Before production, the family who owned the home gave Anderson free rein regarding renovations for the film, as long as he worked with their architect.

The castle-like home still bears several of the original details that appeared in the cult classic, including parquet flooring, period woodwork and decorative molding, though there have been a fair share of modern renovations, including six gas-operated fireplaces and an elevator that runs through the first three floors of the four-story home.

According to the listing, the mansion offers six bedrooms, four and a half bathrooms, a formal living room, a formal dining room, a butler kitchen, a family room, a chef’s kitchen and a garden.

While the home is most recognized for its appearance in Anderson’s film, it also possesses deep roots in New York City’s history. The home once belonged to U.S. attorney Charles H. Tuttle, who ran for governor against Franklin D. Roosevelt.

Take a tour of the whimsical mansion in the gallery above. Inquire about the listing on Compass’ website, via agents Spencer Means and Paolo Sciarra. 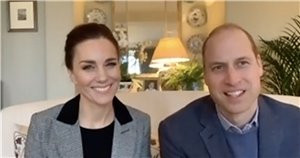 Inside Kate Middleton and Prince William’s £1.5 million second home which was designed by Duchess