25 times Kate Middleton matched her outfits to the occasion 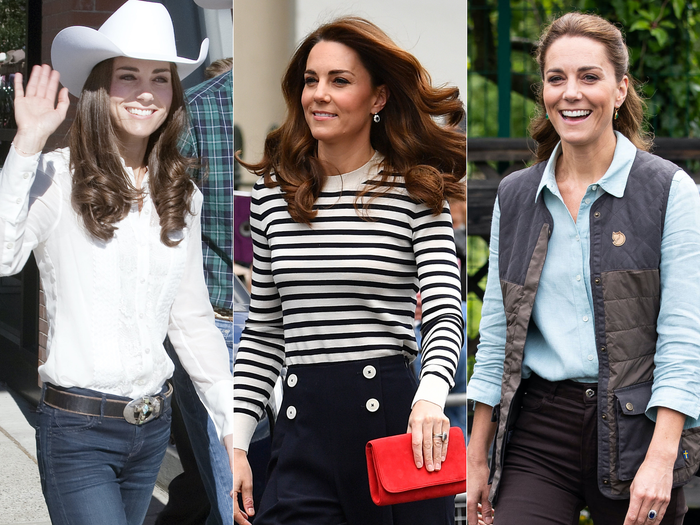 In 2011, Kate Middleton attended the Calgary Stampede Parade in Canada in a rodeo-style outfit. 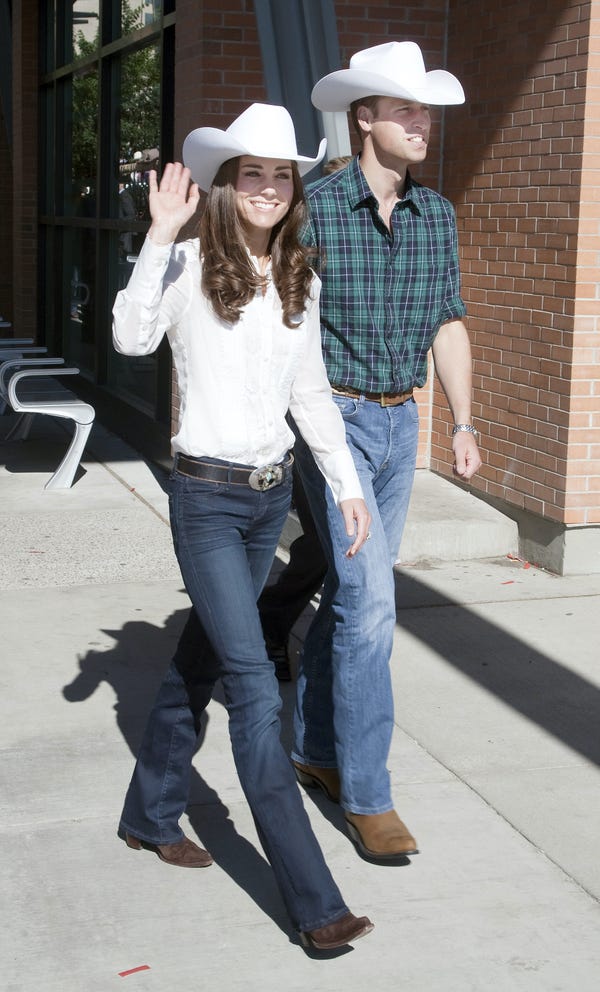 For the event, Middleton wore a Temperley London blouse with Goldsign jeans, a Butler and Wilson belt, and R. Soles suede boots.

During the 2012 Wimbledon Championships, Middleton wore an off-white sweater dress that seemed to match the all-white dress code tennis players have to follow. 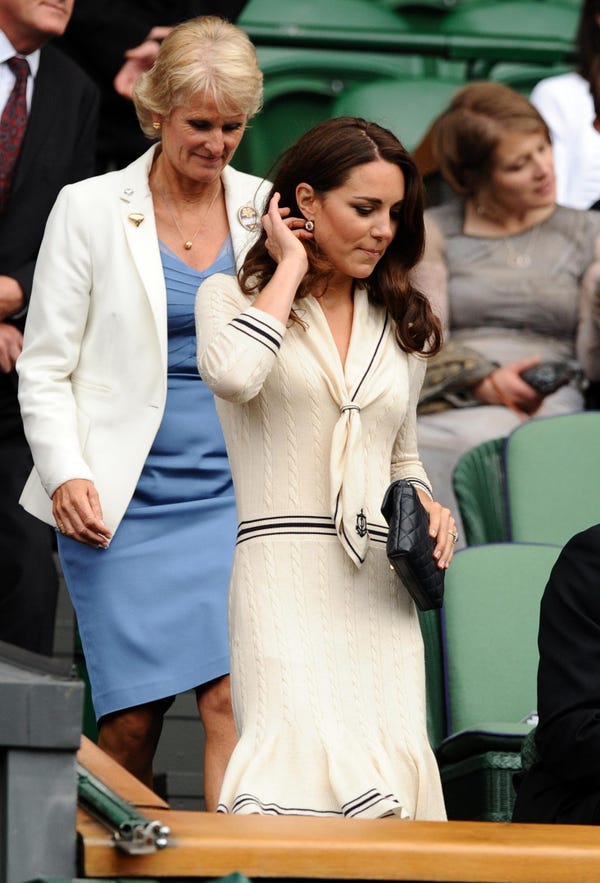 The Duchess of Cambridge paired an Alexander McQueen sailor dress with a Jaeger bag, channeling the dress code required by players at Wimbledon. 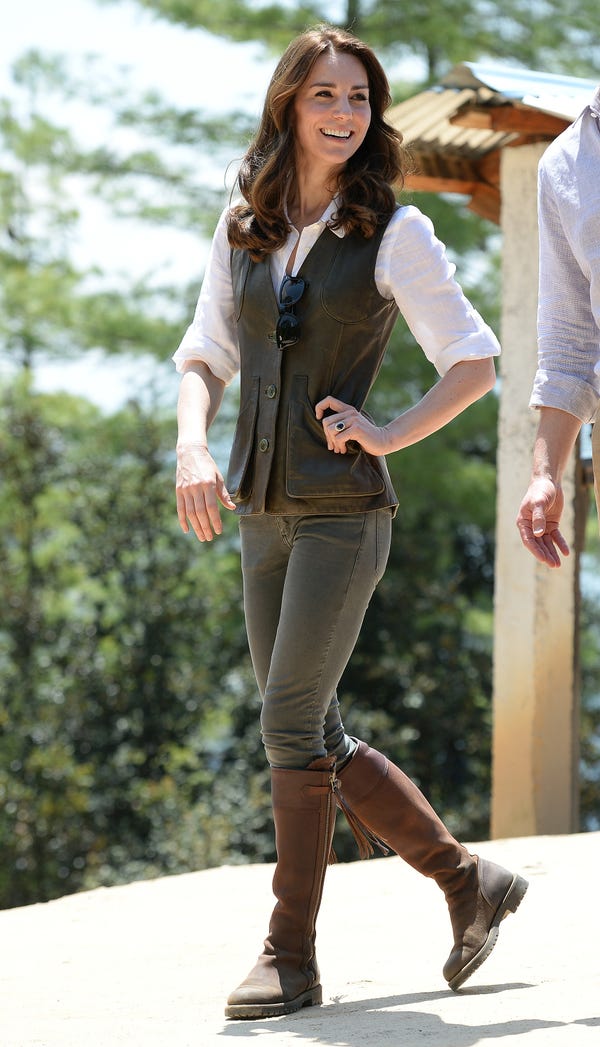 Middleton attended a sailing event in 2016 wearing a nautical-themed outfit. 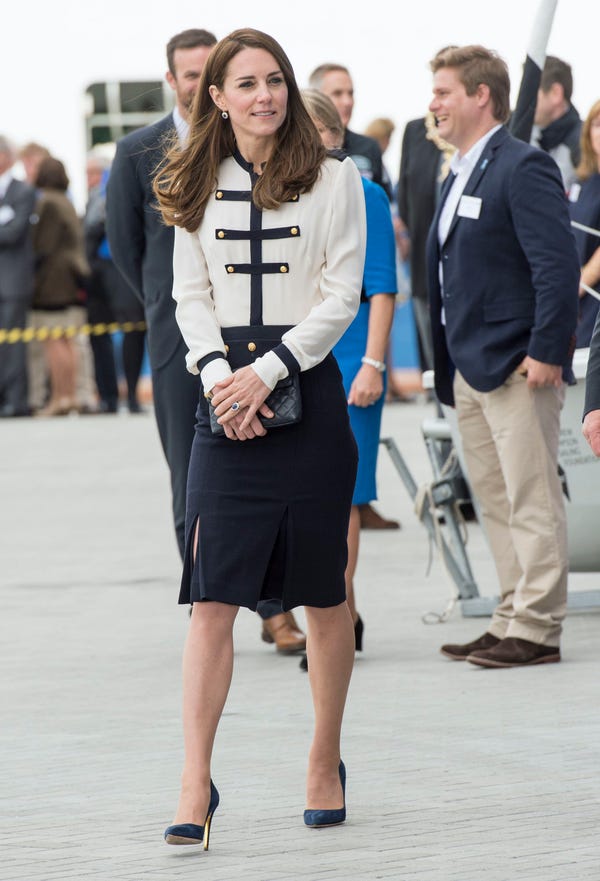 Middleton visited the Ben Ainslie Racing facility in an Alexander McQueen set that she was also pictured wearing in 2011 and 2014. She accessorized her outfit with navy suede Rupert Sanderson heels and a Jaeger handbag.

Middleton paid tribute to the Canadian flag during a royal tour of the country in 2016. 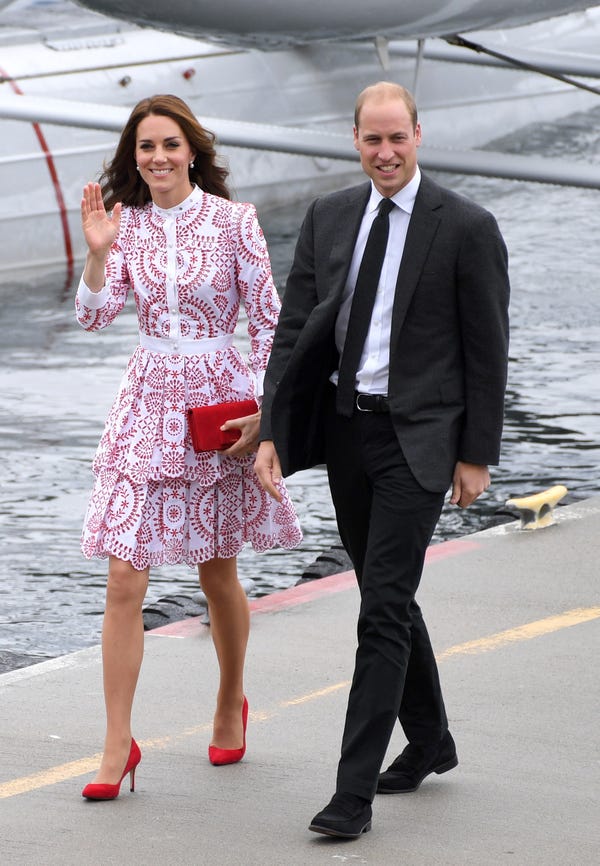 For the second day of her Canadian tour with Prince William, Middleton wore an Alexander McQueen dress from the Resort 2017 collection. She paired her red-and-white look with a Miu Miu clutch and Russell and Bromley pumps.

During her 2016 royal tour of Canada, Middleton attended a reception at the Government House wearing a bold red dress with the Queen's maple-leaf brooch. 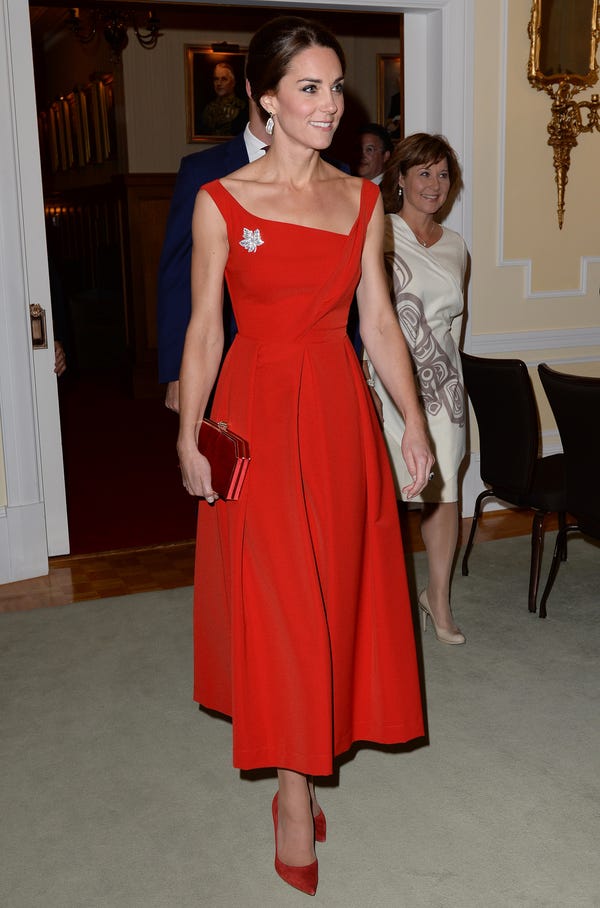 Middleton embraced the country's flag colors in a glamorous red Preen dress and matching Russell and Bromley pumps. Her brooch was a nod to the maple leaf, which has been Canada's symbol for centuries and is printed on the country's flag.

Middleton wore a festive printed dress to attend a Christmas party for volunteers at the nonprofit youth group The Mix. 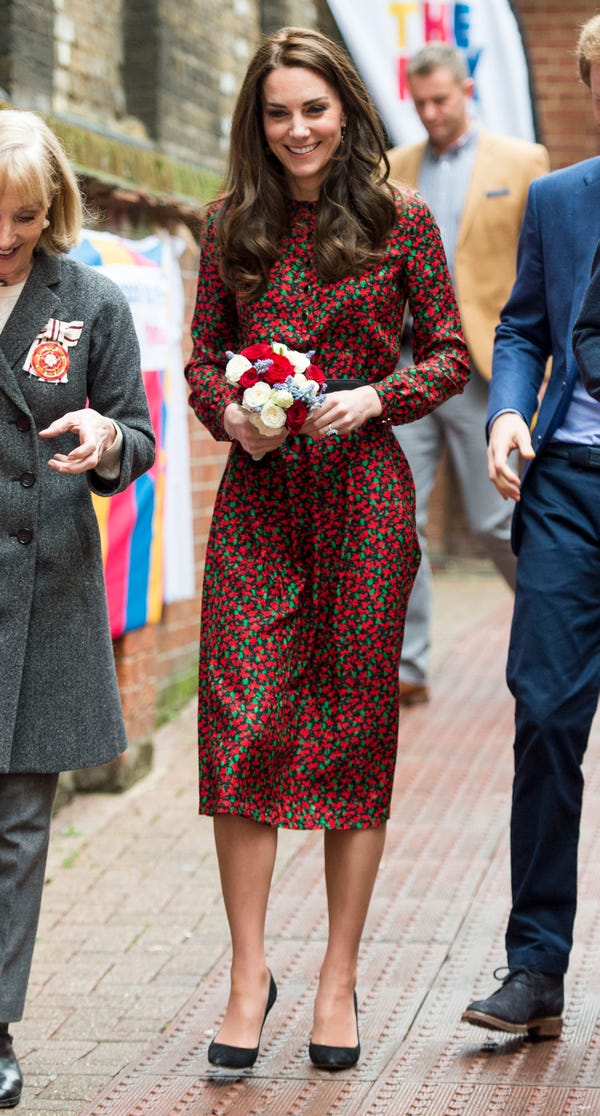 For an event in 2016, Middleton sported a Vanessa Seward dress, which she cinched with an Alexander McQueen black belt and paired with black suede pumps.

Middleton followed her tradition of wearing a green coat at the St. Patrick's Day parade in 2017. 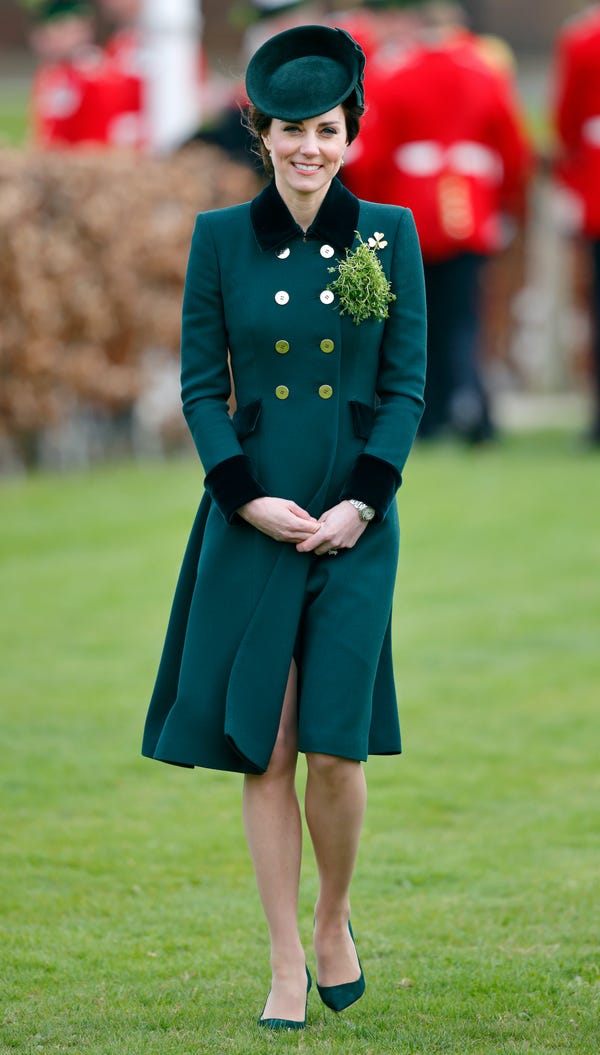 Middleton paid tribute to Ireland on St. Patrick's Day in 2017 by wearing a green Catherine Walker coat and matching fascinator.

The Duchess of Cambridge made a nod to Luxembourg's flag with a light-blue coat she wore during a visit to the country. 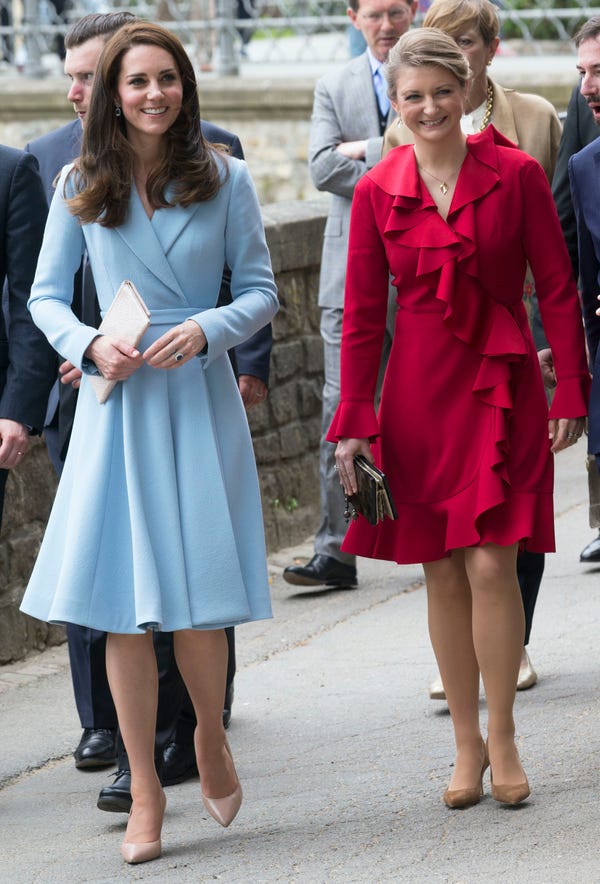 The duchess turned to one of her favorite designers, Emilia Wickstead, for a visit to Luxembourg. She paired the pale-blue coatdress with L.K. Bennett heels and an Etui cream-colored clutch.

In 2017, Middleton attended the unveiling of a blue whale skeleton at London's Natural History Museum in a light-blue dress, matching the aquatic theme of the event. 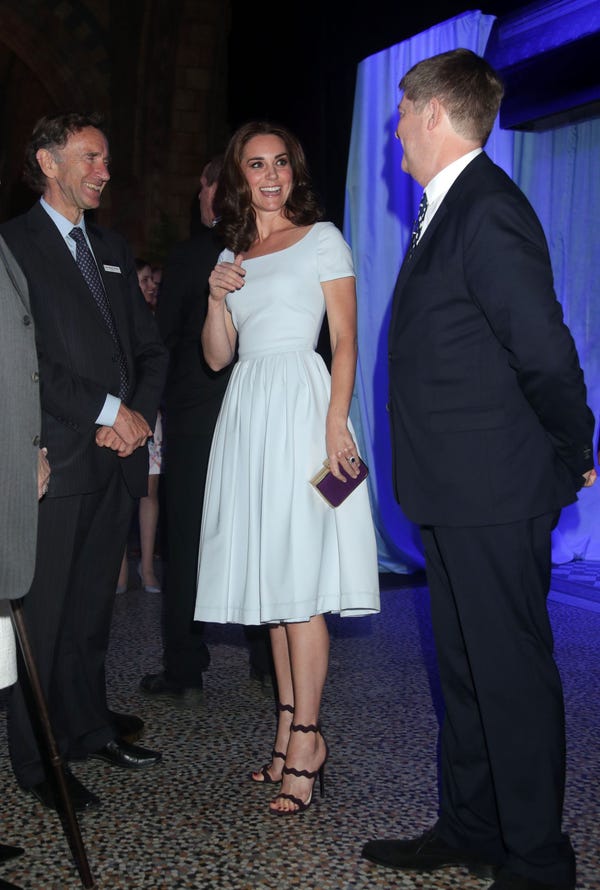 The duchess wore a Preen dress with purple Prada heels and a Jerome C. Rousseau clutch.

Middleton made a tribute to the white stripe in Poland's flag during the first day of her royal tour in 2017. 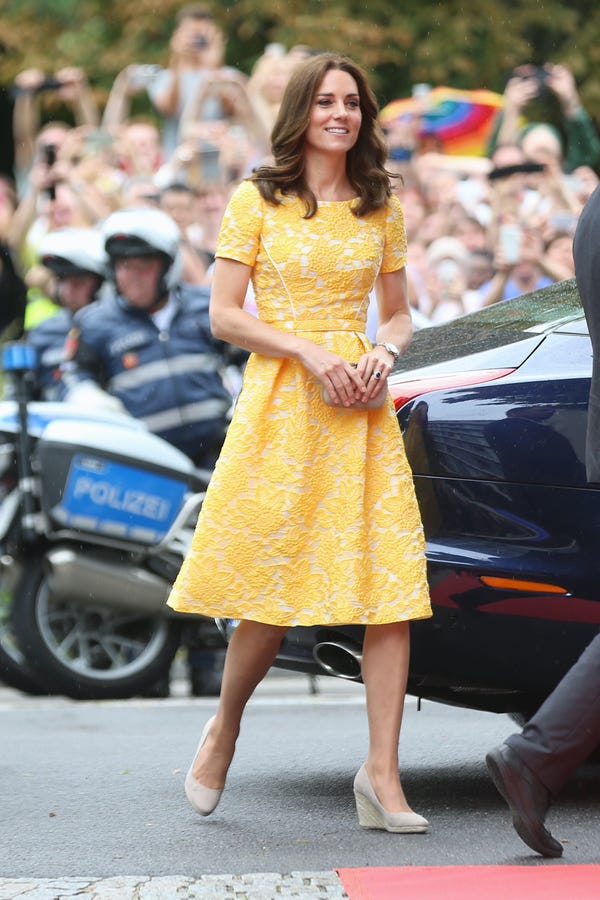 The duchess wore a yellow similar to the one present in Germany's flag. She paired her custom-made Jenny Packham dress with Monsoon espadrilles, a Russell & Bromley clutch, and pearl Oscar de la Renta earrings.

The Duchess of Cambridge visited the Sunken Garden on the grounds of Kensington Palace in a floral dress. 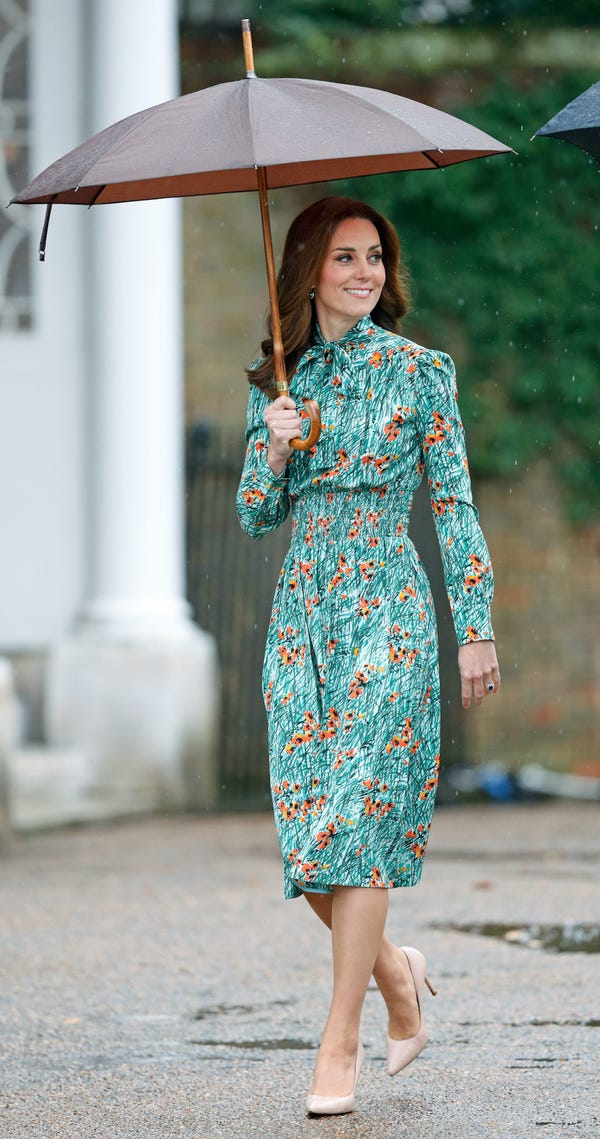 To visit the garden, which was made to honor Princess Diana's life, Middleton wore a green Prada dress. The floral print included poppies, which are a traditional symbol of remembrance.

Middleton couldn't have looked more festive in a green and red coat for the royal family's Christmas Day service in 2017. 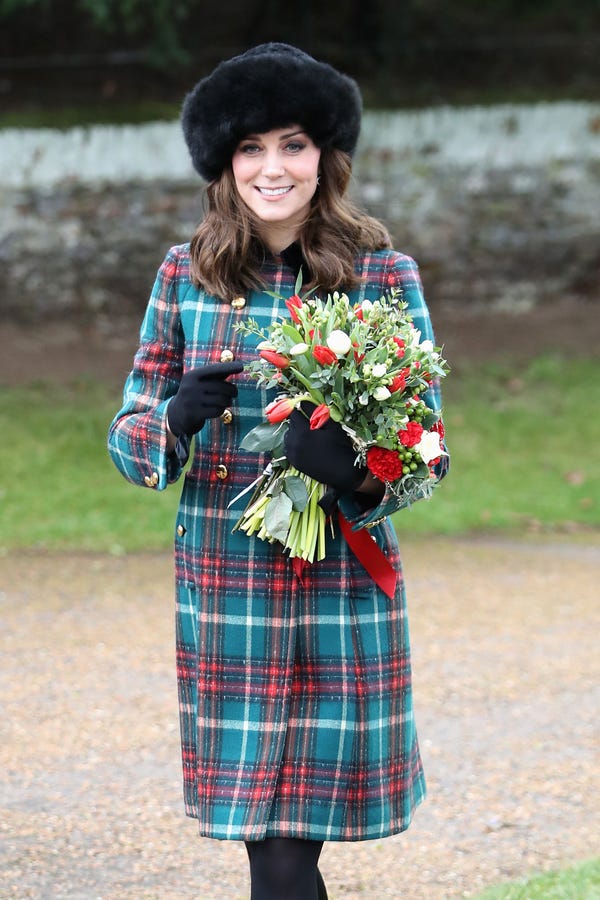 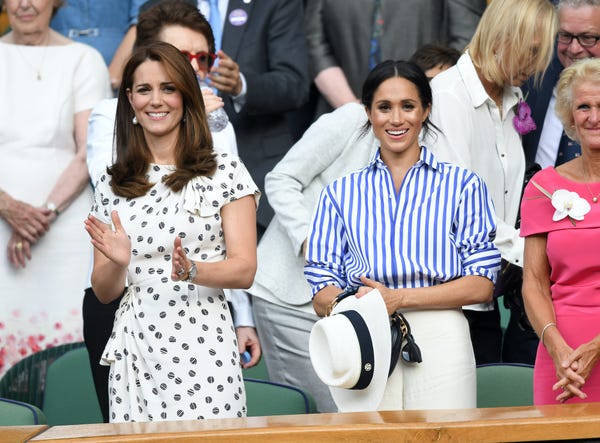 Middleton arrived for day 12 of the tennis championships in a bespoke Jenny Packham dress that she paired with a Dolce and Gabbana handbag and Gianvito Rossi pumps.

In 2019, Middleton wore a tartan coat for a visit to Scotland. 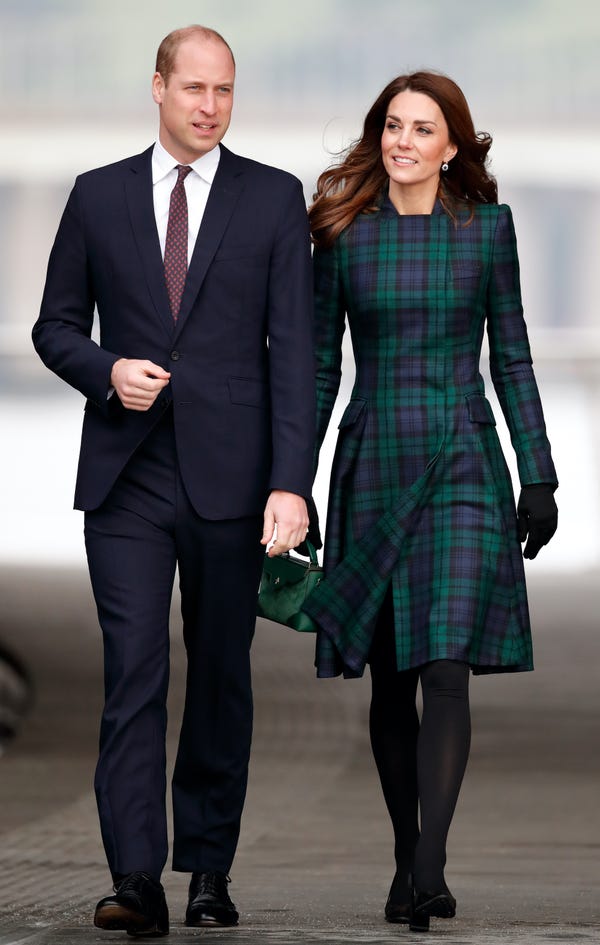 While visiting the country in January 2019, the Duke and Duchess of Cambridge arrived for the official opening of the V&A Dundee Museum, Scotland's first design museum.

Middleton stood out in an McQ coat from Alexander McQueen's lower-priced brand. This was the third time she wore the coat. She wore a bag from MANU Atelier and finished off her outfit with black tights, Tod's pumps, and Cornelia James gloves.

For St. Patrick's Day in 2019, Middleton pulled out a different green coat to attend the parade. 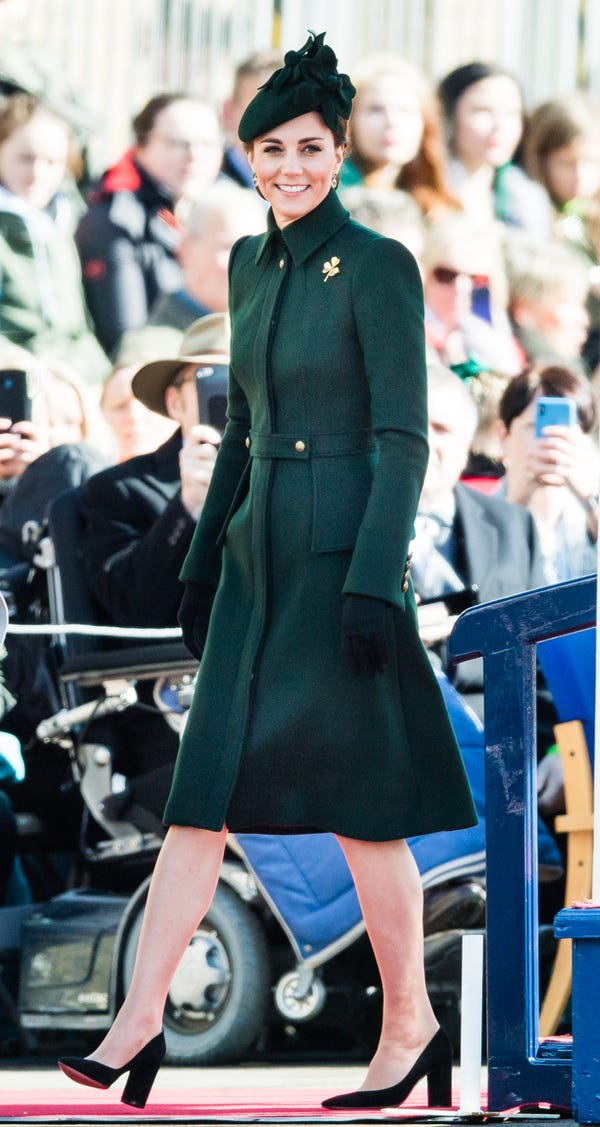 Middleton continued her streak of wearing green on St. Patrick's Day when she attended a parade in a custom Alexander McQueen coat.

She added a dark-green Lock & Co. Hatters hat, a Cartier shamrock pendant that belonged to the Queen, and black pumps.

Middleton pulled out another nautical-themed outfit in 2019 to attend the King's Cup Regatta.

In 2019, Middleton dressed for the occasion when she attended the RHS Chelsea Flower Show in a floral dress. 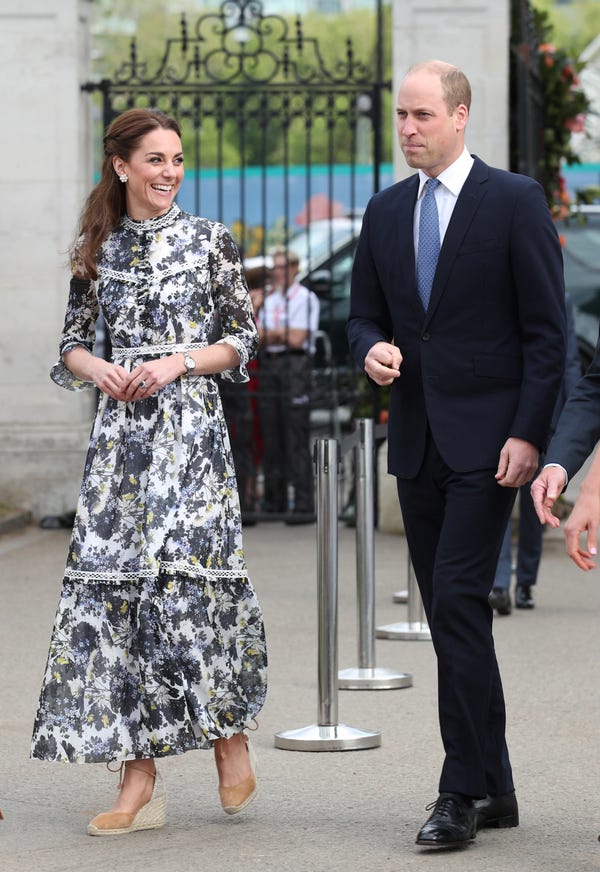 Middleton wore an Erdem gown and accessorized her statement look with Cassandra Goad pearl and diamond studs and Castañer wedges.

During her royal tour of Pakistan in 2019, Middleton arrived in a traditional shalwar kameez. 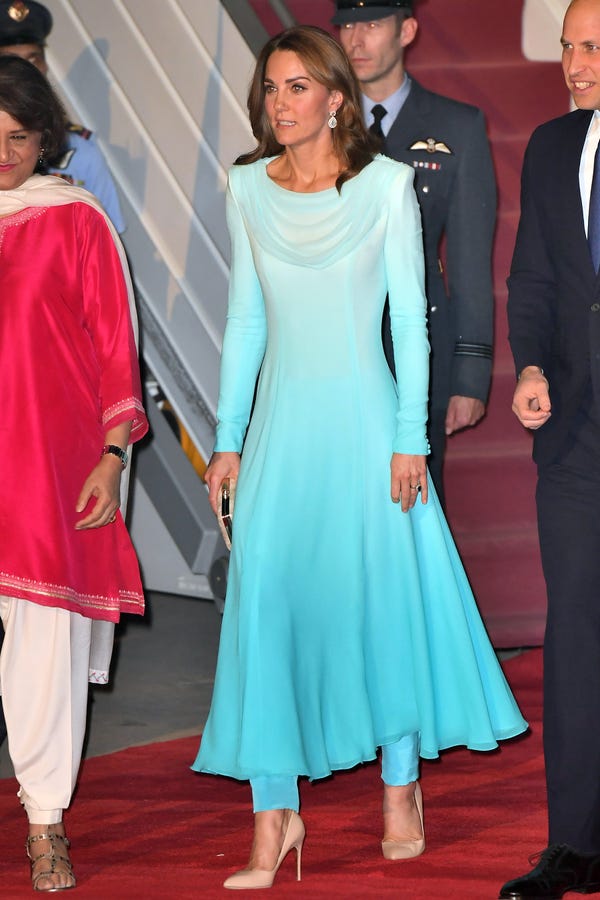 For the first day of her royal tour, Middleton wore a traditional dress and trouser combination designed by Catherine Walker. She paired it with nude heels and statement earrings.

The look was similar to a blue shalwar kameez outfit that Princess Diana wore when she visited the country in 1996.

During the same trip, Middleton continued to follow Pakistani tradition by wearing an emerald gown and matching dupatta. 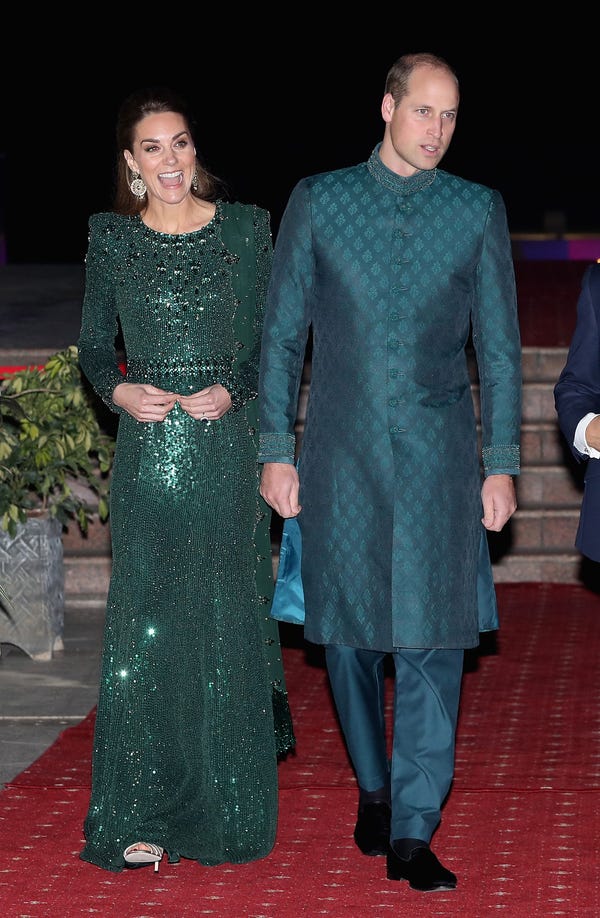 Middleton and Prince William made history by becoming the first British royal couple to wear matching traditional outfits during their royal tour of Pakistan.

The duchess wore a glittery Jenny Packham gown in green, which was a tribute to the flag of Pakistan.

Kate Middleton wore an outdoorsy outfit to visit the UK Scouts' headquarters in 2019.

In September 2020, Middleton wore a similar outfit to roast marshmallows with the Scouts.

Middleton arrived at a gardening center in a casual outfit with a pair of sneakers. 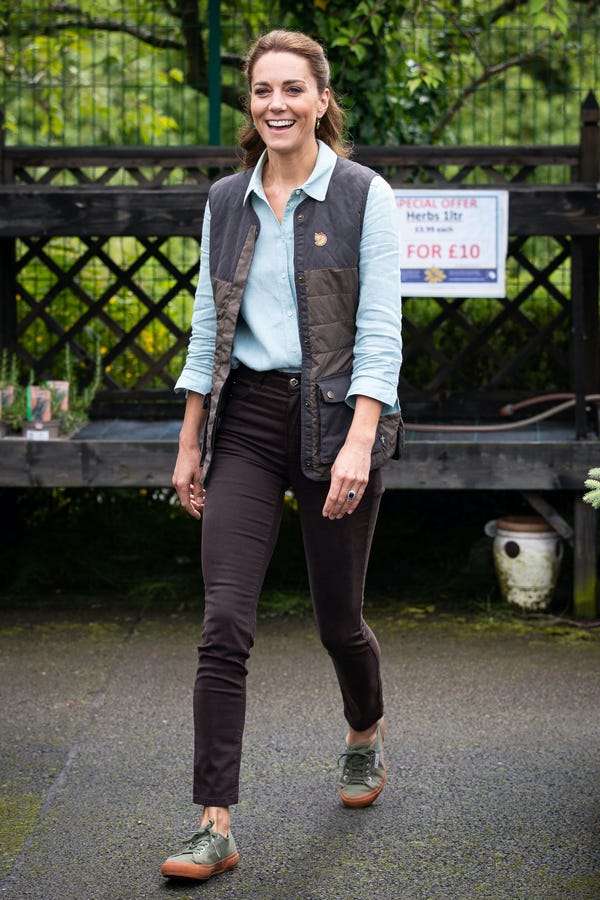 In June 2020, the duchess arrived at Fakenham Garden Centre in Norfolk for her first in-person engagement since that March. She channeled the outdoors with a Fjällräven vest, Jaeger linen shirt, Massimo Dutti pants, green Superga sneakers, and Monica Vinader earrings.

During her royal train tour in 2020, Middleton paid tribute to the color of Scotland's flag when she arrived in a bright-blue coat. 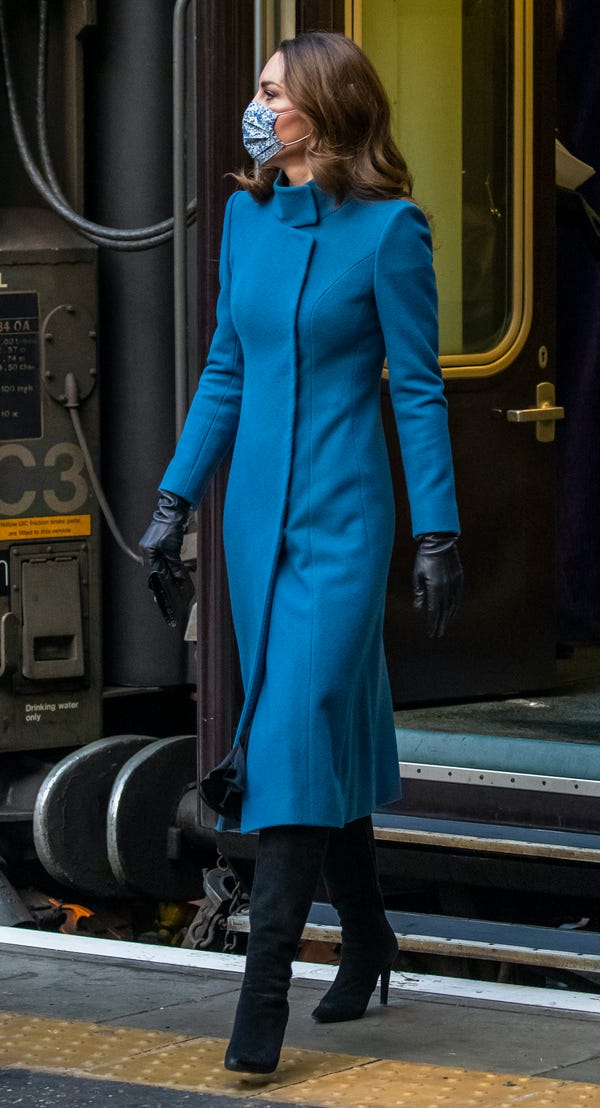 The Duchess of Cambridge arrived in a Catherine Walker coat that she previously wore in 2018.

This time around, Middleton accessorized the coat with a Strathberry purse, an Amaia face mask, and sapphire earrings that once belonged to Princess Diana.

Middleton visited the Guinness Storehouse in Ireland wearing an emerald-colored dress in 2020. 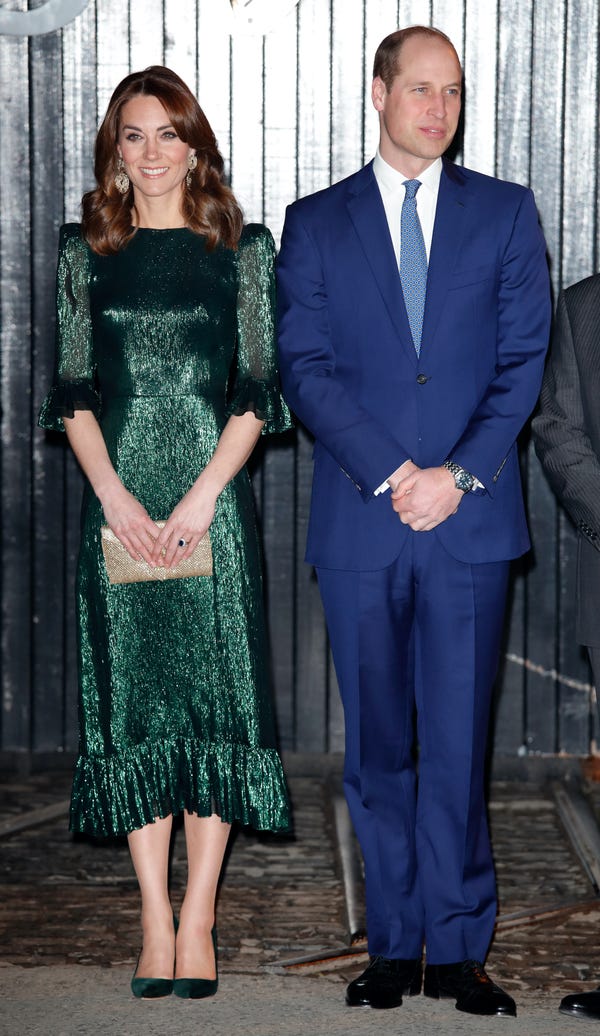 During a royal tour of Ireland in 2020, Prince William and Middleton made a stop at the Guinness Storehouse, which offers tours of its brewery.

The duchess wore a $2,000 by The Vampire's Wife dress, which she paired with Manolo Blahnik velvet pumps, a $319 Wilbur & Gussie Charlie clutch, and H&M earrings.