Home » Lifestyle » A Louisiana couple bought an 80-year-old general store for $55,000 and turned it into their dream home. Here's how they did it — and what it looks like now.

A Louisiana couple bought an 80-year-old general store for $55,000 and turned it into their dream home. Here's how they did it — and what it looks like now.

In 2016, the couple started their own renovation company called De Ja Vu Properties. Together, they've transformed over 15 homes, one school bus, and one 1957 Yellowstone camper.

When they were approached with the opportunity to buy the old OJ Mire General Store in 2018, they were in the process of renovating another home owned by the Mire family. After taking a tour of the store, the couple purchased it for $55,000. But instead of just renovating the building and selling it like they usually would, they decided to keep it.

Roddy and Cinnater spent just over a year turning that old general store, which had sat vacant for nearly 40 years, into their dream home.

The home sits in the town of Thibodaux, Louisiana, which is just 50 miles from both Baton Rouge and New Orleans, cities that are growing considerably. A recent Realtor.com analysis pegged Baton Rouge as the country's most affordable metro area to buy a home.

Business Insider caught up with Roddy to find out what type of work went into the renovation. Keep reading for a look at the building's transformation.

Do you have a similar home-renovation story you'd like to share? Get in touch with [email protected]

Rod Roddy is a pianist in a band called Louisiana's LeRoux. He also owns his own roofing company, Alvin Ballard Roofing. 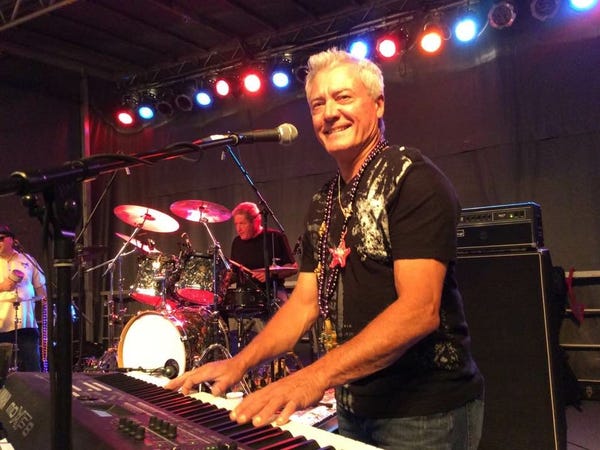 He and his fiancée, Lisa Cinnater, share a passion for renovating old homes. They even run a renovation company called Deja Vu Properties. "We like taking old properties and keeping them from getting destroyed," Roddy told Business Insider. 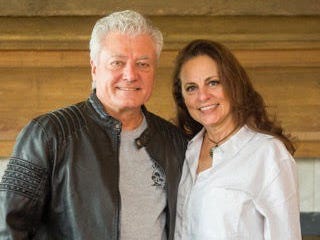 They stumbled upon the opportunity to buy the old OJ Mire General Store while renovating another home that was also owned by the Mire family. At that point, the store had been sitting empty for about 40 years. 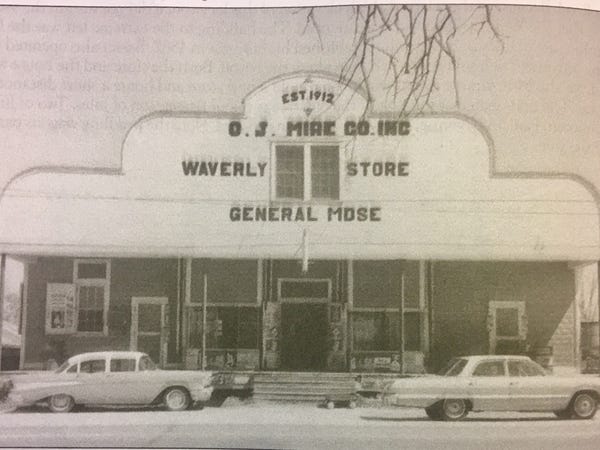 "I'd always heard about the store, but I'd never been in it. I was told it had a lot of nice wood and stuff," Roddy said. "We bought it because we figured we'd do something with it, and one night my fiancée came to bed and said, 'Let's make it our house.'" 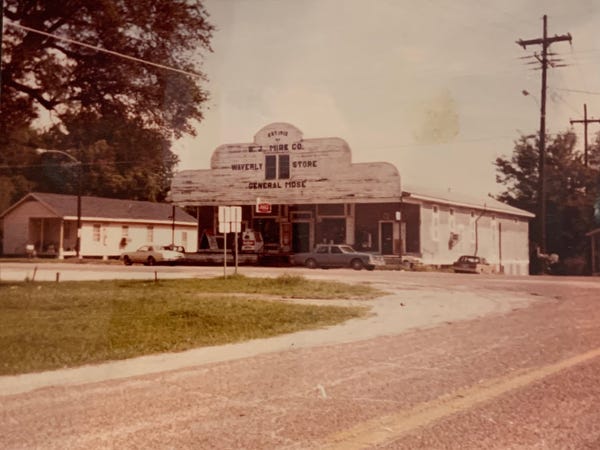 In October 2018, the couple bought the store for $55,000. One of the distinguishing features of the house, as shown in the renovation photo below, is that it has three front doors. In its day, the general store could be accessed through the middle door, while the rooms on the sides were used as a pay room and a barroom, respectively. 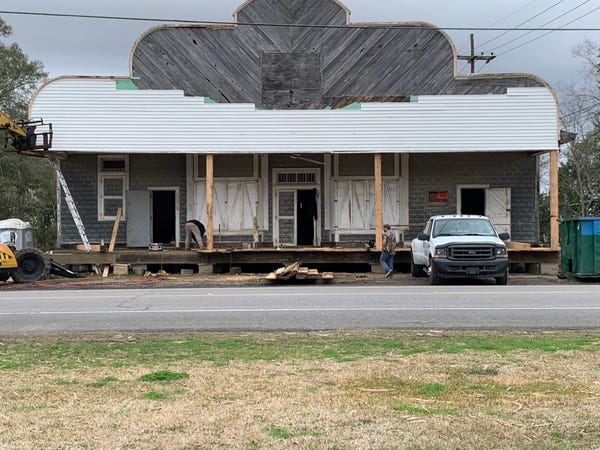 The store is located in Thibodaux, Louisiana, a town of just over 14,400 people. It sits 50 miles away from both Baton Rouge and New Orleans. The old general store lies along the Bayou Lafourche, a 106-mile-long waterway that runs through southeastern Louisiana and flows into the Gulf of Mexico. 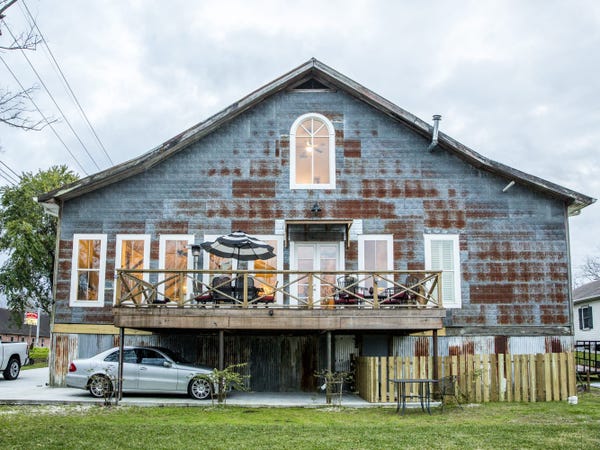 Prior to closing its doors in the late 1980s, it had functioned as a general store for around 60 years. (The cellar was briefly turned into a bar in the early '90s but closed down in 2000.) 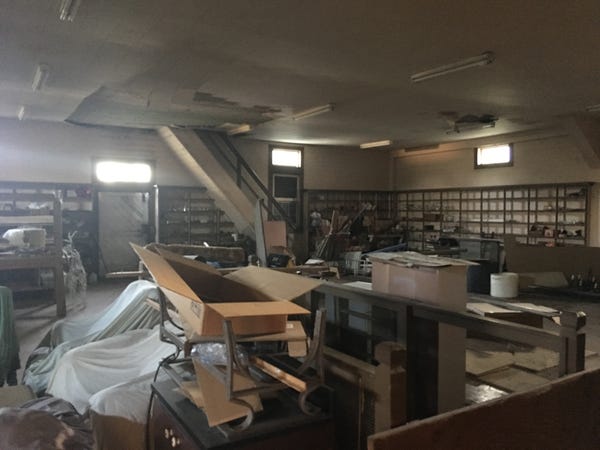 When Roddy and Cinnater bought the building, there were still remnants of the general store left inside. 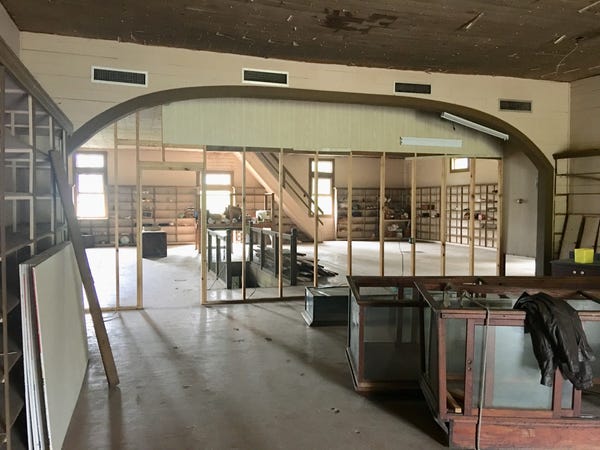 Among the items they found were old scales and boxes of handwritten journals filled with past transactions. 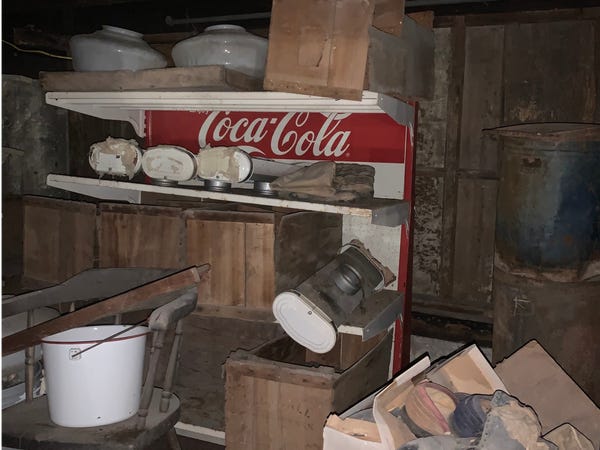 There were even old registers left behind. 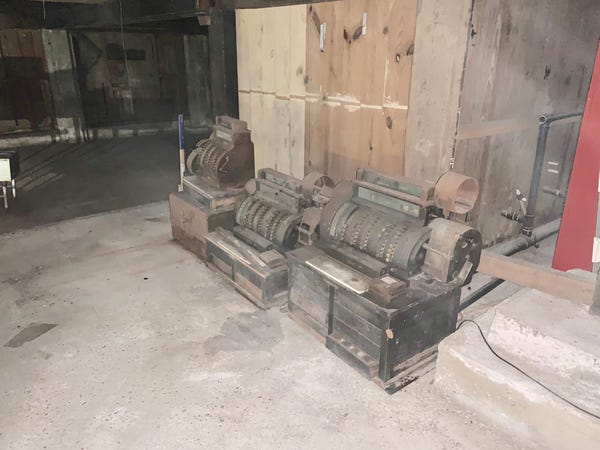 And, the wooden shelves that had previously been used to display the store's items were still hanging on the walls. 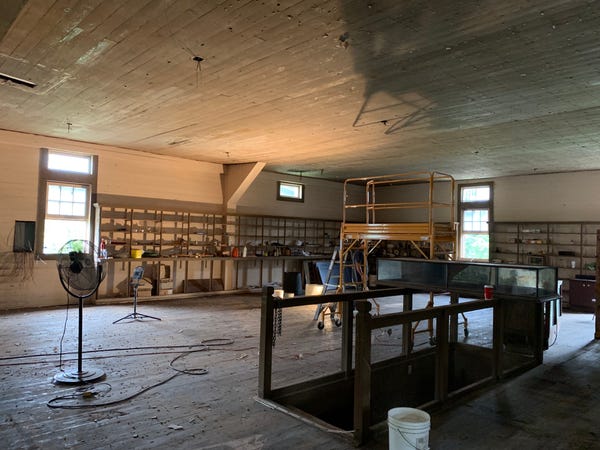 During the renovation process, Roddy and Cinnater tried to repurpose as much of the original store as they could. 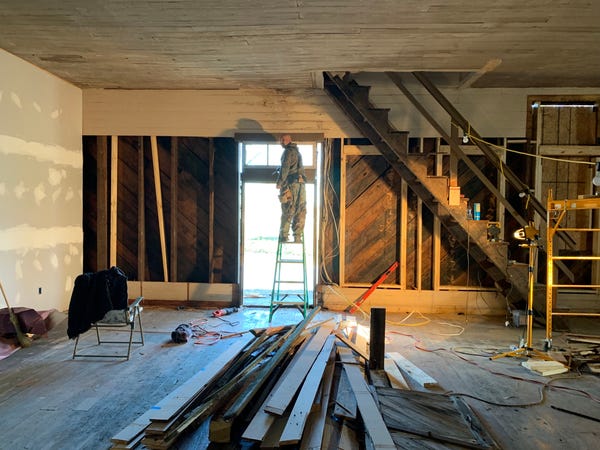 To that effect, all of the window trimmings on the home's interior are made from those old wooden shelves. 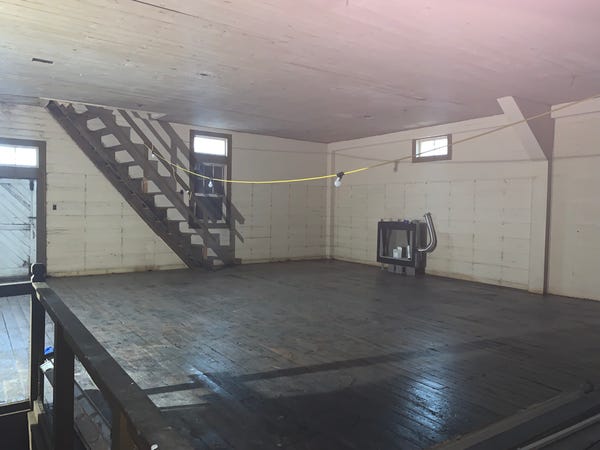 The couple also wrapped an original display case with two antique doors to make an island for their new kitchen. 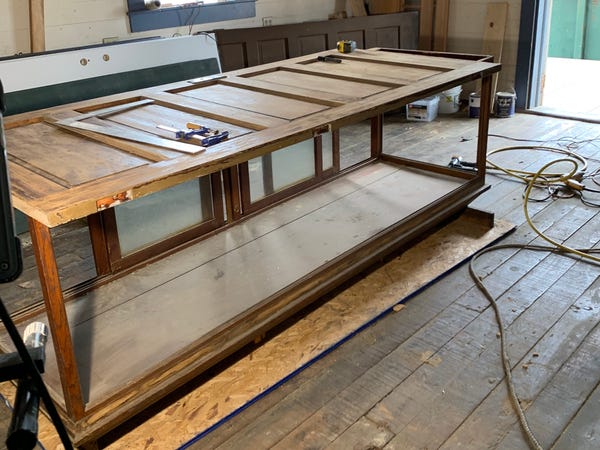 And all the walls in the house — besides the ones the couple put in place to create the bedrooms, bathrooms, and the laundry room — still boast original wood. 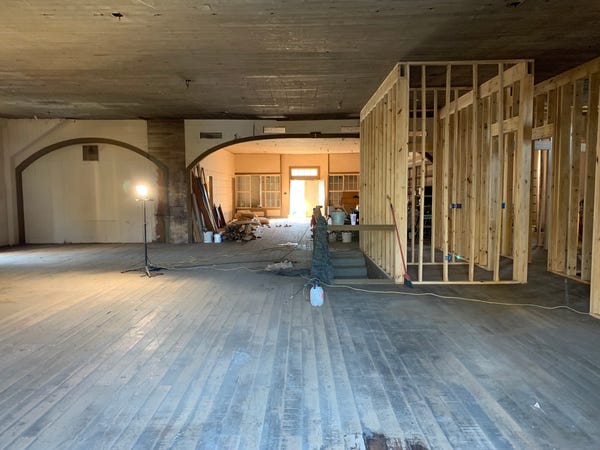 When Roddy and Cinnater bought the building, the ceilings and floors were covered in tiles, but they removed them to showcase the original wood underneath. 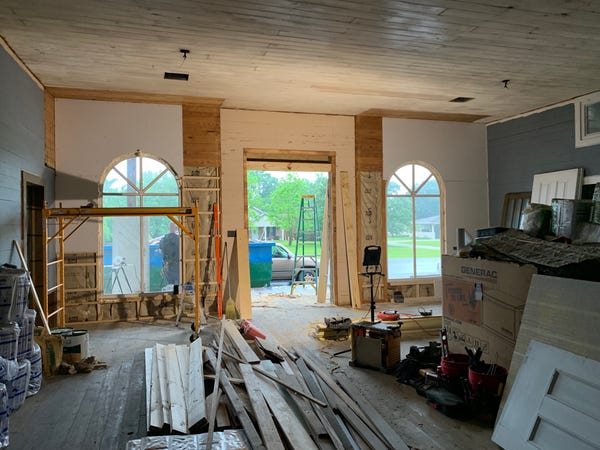 After a year of working to bring their dream home to life, the space was finally move-in ready in September 2019 — but there was still some planning to do. With such an unusual set-up, one of the biggest challenges the couple faced was figuring out where everything was going to go. 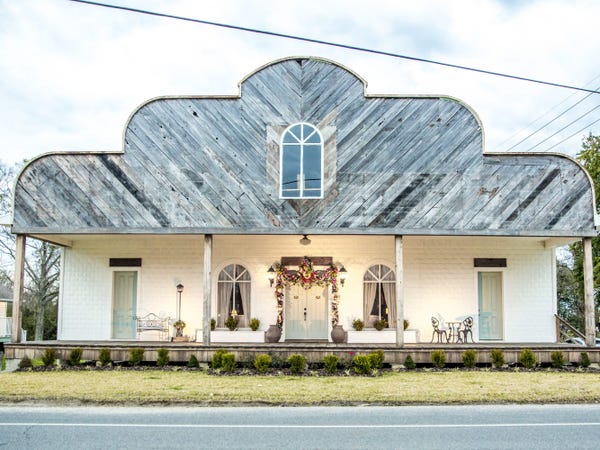 The home's middle doors open up into this music room. 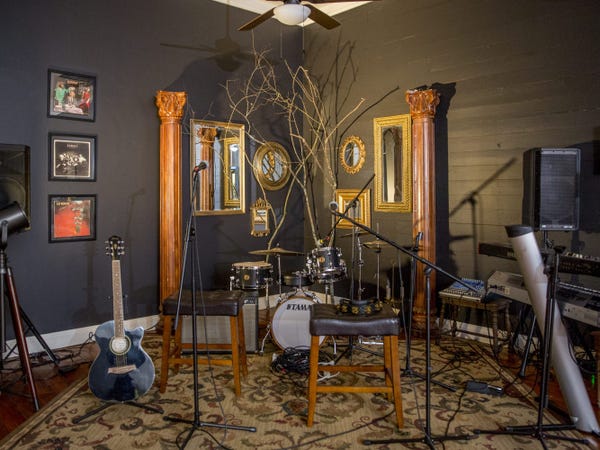 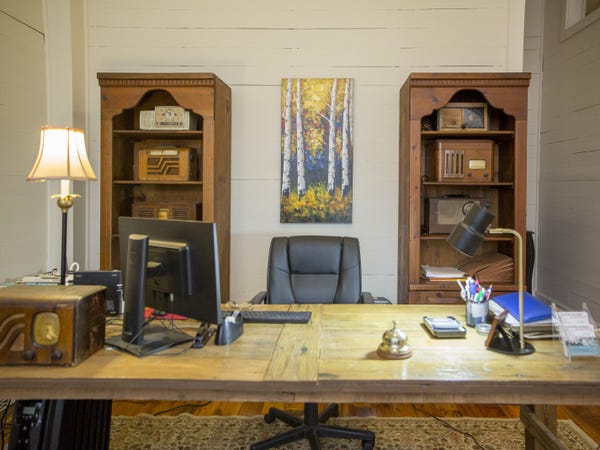 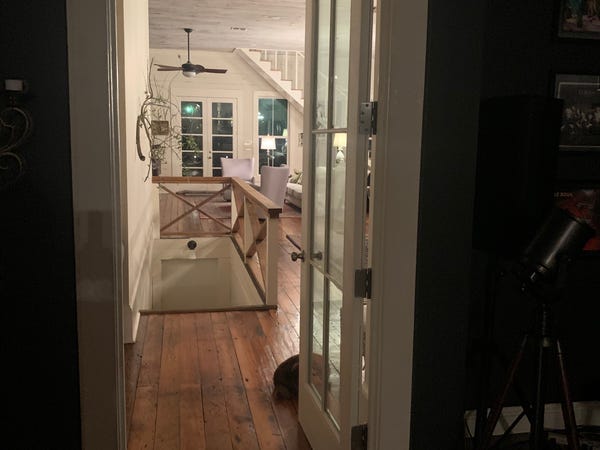 The sprawling living area is an open-floor concept with the kitchen flowing right into the living room. The store's original wood flooring is on clear display throughout the renovated home. 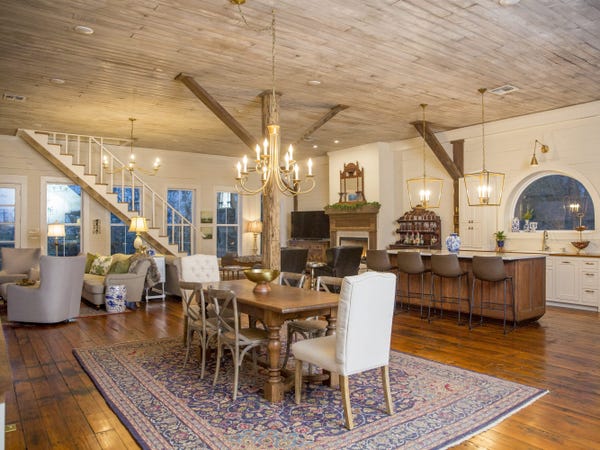 In fact, bits of the store's history are visible throughout the entire house. The countertops in the kitchen are made from old bar countertops that had been left in the cellar. 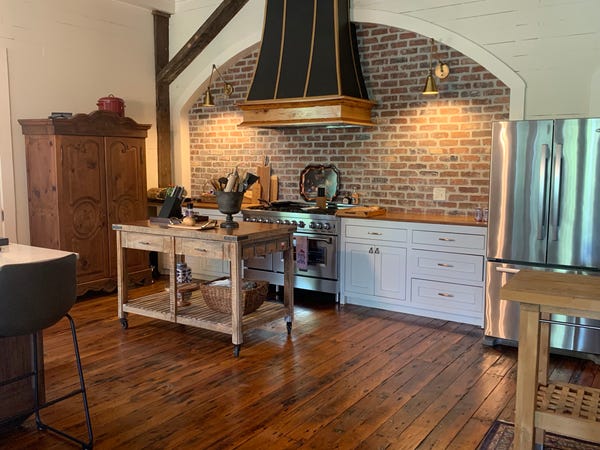 The home has two guest bedrooms, a master bedroom, and three full bathrooms. 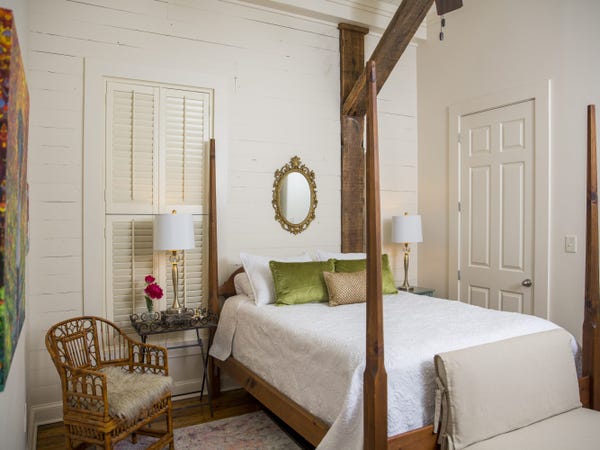 And up the staircase in the back of the living area is the reading room. 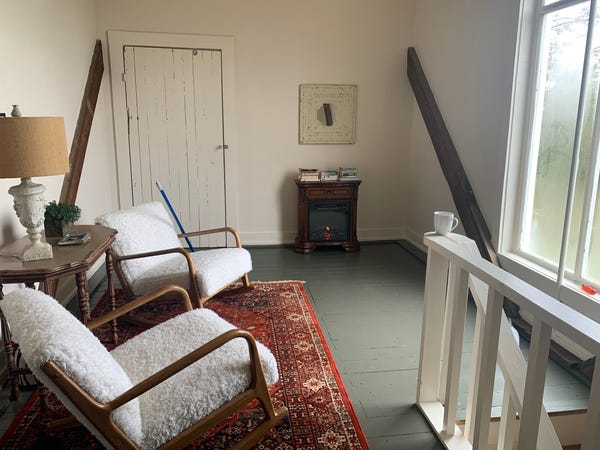 So far, Roddy and Cinnater have spent around $350,000 on renovations. 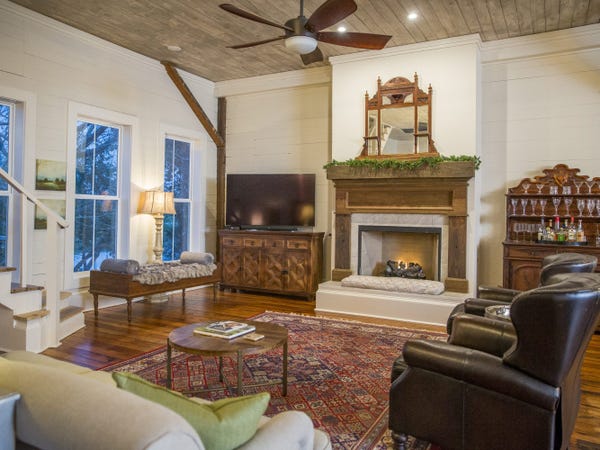 Though Roddy and Cinnater eventually intend to downsize, they currently plan on living in the home for a few years. But when they do downsize, they have big plans for the property. They are floating around the possibilities of turning it into a bed-and-breakfast, a wedding and party venue, or maybe even a boutique store — but nothing has been decided yet. As for now, the two are enjoying their dream home. 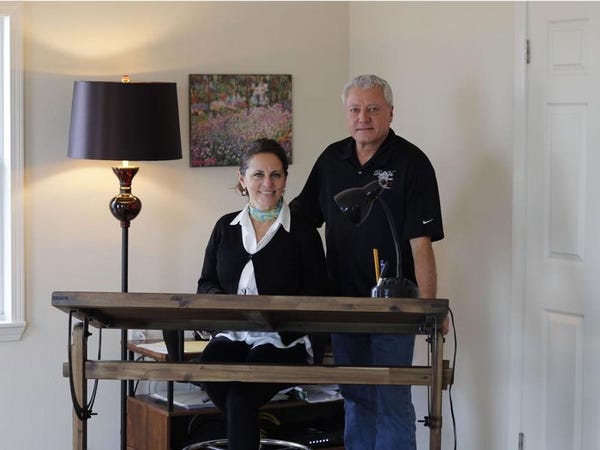 This article is part of Business Insider's ongoing series, How I Renovated It, where we talk to homeowners around the country about the process, budget, and transformation that goes into a renovation. If you have a story you'd like to share, get in touch with this reporter at [email protected]