Albanese, Morrison make their pitches on business and economy

Labor leader Anthony Albanese will tell business leaders he wants a new phase of economic reform to lift Australia’s growth and create the conditions for rising wages, ramping up his message on jobs after this week’s interest rate rise focused the election campaign on the economy.

In a competing pitch, Prime Minister Scott Morrison will vow on Thursday to help 400,000 small business owners set up shop over the next five years under policies he claims would be better for business. 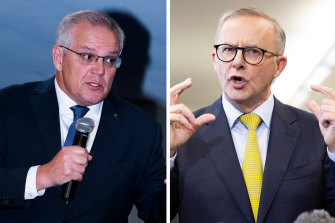 The two leaders will step up their claims on economic management at a time when peak business groups are calling for action by either side after the May 21 election to ease labour shortages, extend help for business investment and cut red tape.

Morrison will base his message on government figures that claim a $23 billion boost to business investment under Coalition tax policies, almost all of it from an instant asset write off that allows employers to claim a tax deduction on new assets.

The Coalition pledge is to support the creation of 400,000 new small and family businesses over the next five years, weeks after Morrison set a goal to add 1.3 million jobs over that time.

“When we create small businesses, we create jobs,” Morrison said in a statement.

The target is in line with the formation of businesses in earlier periods, although official figures also take into account the number of small businesses that shut down.

Over the four years from 2017-18 to 2020-21, a net 264,500 businesses were created. The data includes businesses with more than 200 employees, but the majority of businesses included in the data had a turnover of less than $2 million.

Albanese will use a speech to business leaders in Sydney to highlight major Labor policies, such as a childcare plan that promises 96 per cent of families will be better off from higher childcare support.

The speech to the Australian Chamber of Commerce and Industry will make a case for further economic reform to lift productivity, although it will do so by highlighting existing Labor policies rather than unveiling new ones.

“The fact is that the country has been drawing down on the sources of Labor’s productivity-enhancing economic growth policies for three decades now,” Albanese will say.

“We now need new reforms to drive growth in the decades ahead.

“The sources of economic growth need to be replenished.A country cannot keep drawing from an old well, because the well eventually dries out.

“Economic policies that play around the edges don’t position the country for the long term.

“Australia needs a new playbook to seize the future.”

Business Council of Australia chief Jennifer Westacott greeted the Reserve Bank interest rate rise on Tuesday with a statement calling for policies from both major parties to remove “bottlenecks” in the economy that hurt growth.

“That will mean finally addressing the structural barriers in the economy, including acute worker shortages, an outdated skills system and record-low business investment,” she said.

“And we can finally take the friction out of our planning system for major projects, make sure the supply of housing is orderly and efficient and reduce the outdated red tape that makes getting products to market and projects off the ground more expensive for businesses and consumers.”

“If you speak to the typical small business owner, they won’t say that there’s 5 per cent inflation, they’ll say that their costs are going up by 30 or 40 per cent, depending on the industry,” she said.

Boyd said the next government should commit to structural reform to make it easier to run a business. “Businesses are ready to grow,” she said.

The small business advocacy group wants industrial relations changes to make it simpler for small businesses to hire staff, reforms to business lending and debt servicing, and an extension of the instant asset write-off scheme that is due to expire in 2023.