Facebook has banned the sharing or viewing of our news articles on its platform. For independent journalism straight from the source, download our app and sign up to our newsletters.

It has been a long time coming – nearly two COVID-interrupted years – but a significant piece of the Anangu Pitjantjatjara Yankunytjatjara (APY) lands has finally arrived in downtown Sydney, and artist Vincent Namatjira couldn’t be happier.

Namatjira this week completed his largest work to date: a 14m by 9m mural on the foyer wall of the Museum of Contemporary Art.

“I’m trying to bring my neck of the woods to the city, to the Big Smoke, for everyone to see,” said Namatjira, winner of last year’s Archibald Prize. 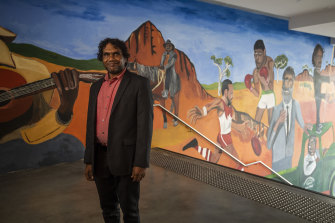 Vincent Namatjira has brought some of the desert country to the Big Smoke.Credit:Louise Kennerley

“I have something in common with these figures and I admire them,” Namatjira said. “I also see them as role models.”

Namatjira worked on the piece for two weeks with Eric Barney, a fellow artist from the Iwantja Arts in their home community of Indulkana 400km south of Alice Springs, only completing it late on Wednesday afternoon.

“When we first started on the mural it was on a piece of paper and it was pretty small but today when I see it on the wall it’s really gigantic,” he said. “At first I thought we’re not going to get it done in time put somehow we pushed through and made it a success.”

Curator Clothilde Bullen said she expected the work to have a big impact both because of its scale and also the subject matter.

“Often in Western society Aboriginal men in particular are vilified and really brought down,” she said. “One of the things that is really important about this is showing men in our culture who are strong, who are proud and who do their ancestors proud. For me to have this at the MCA – at a site of first contact – is really critical.

“I feel this one is going to be a crowd favourite. It’s a really important work.”

One of the men in the mural is retired footballer Adam Goodes, who also featured in Namatjira’s Archibald-winning work, Stand Strong For Who You Are.

The artist said he was inspired by the documentary The Final Quarter, which detailed the racism Goodes endured throughout his career.

“It reminded me of some hard experiences I had growing up in the foster system, disconnected from culture and country and I experiences a lot of racism. It takes a lot of courage to stand up to racism so I greatly admire Adam for the way he stood up and said, ‘enough is enough’.”

Life for Namatjira has changed significantly since he became the first Indigenous artist to win the Archibald Prize, cementing his position as one of the nation’s best-known contemporary Indigenous artists.

“It’s like people want a piece of me and I’m kind of liking it,” he said. “I’m liking that people from other areas in Australia approach me. It’s amazing to accomplish such a thing – if I can do it so can my people.”