Home » Are koalas about to hit the endangered list?

Koala populations are struggling in NSW, Queensland and the ACT, prompting a review to check how close they are to extinction in the wild amid widespread habitat loss from land clearing and increasing impacts from climate change, bushfires, heatwaves and droughts.

Koalas are listed as a vulnerable species in NSW, Queensland and the ACT under the federal government classification. But their status may need to be upgraded to endangered if the review finds their chance of survival should be downgraded to match the 40 species of native mammals already on the endangered list such as quolls, numbats and Tasmanian devils. 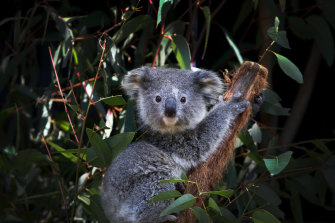 Federal government is investigating if the conservation status of koala needs to be upgraded to endangered.Credit:Getty Images

Federal Environment Minister Sussan Ley has asked the Threatened Species Scientific Committee to undertake a review of koala survival status, kicking off a scientific study and public consultation. She has also started a process to create a cross-jurisdictional recovery plan, which is nearly 10 years overdue.

“The images of burnt, injured, dehydrated and frightened koalas suffering during the bushfires were haunting,” Ms Ley said.

The Commonwealth Environment Protection Biodiversity Conservation Act has a tiered listing system of escalating risk for species disappearing from the wild, starting with “conservation dependent”, to “vulnerable” then “endangered” and finally “extinct”.

Koalas are vulnerable in their native range in Queensland, NSW and the ACT – but not Victoria or South Australia – which makes them a Matter of National Environmental Significance with protection under Commonwealth law.

Ms Ley flagged in January 2020, during the Black Summer fires when about 10 million hectares of bushland burned, that koalas’ conservation status in Queensland may need to be ramped up due to habitat loss. It’s been estimated as many as one-third of NSW koalas – about 10,000 animals – perished in the blazes and the preceding drought.

An analysis of government development approval registers by the World Wildlife Fund found that between 2010 and 2018, 43,113 hectares of known koala habitat was cleared, excluding logging operations.

Scientists have criticised the federal government for its lack of action on koala conservation.

The federal government has also kicked off public consultation on a koala recovery plan to coordinate efforts across jurisdictions to improve conservation efforts and boost koala populations.

When the status of koalas hit the vulnerable list in 2012, the government committed to creating a recovery plan. A one-off three-year extension is permitted, which former environment minister Greg Hunt issued for the koala plan in 2015.