Home » Lifestyle » Are Taylor Swift & Justin Bieber Friends? They Don’t Have One Thing Every Friendship Needs

Are Taylor Swift & Justin Bieber Friends? They Don’t Have One Thing Every Friendship Needs

Celebrity relationships and friendships are a rare breed. These famous faces have their lives played out in front of the masses, whether it’s the good, the bad, or the straight-up shady. In Elite Daily’s new series, It’s Complicated, we’re highlighting the biggest celebrity “feuds” that took over Hollywood and dominated our Sunday brunches for weeks on end. We’ll take a deep dive into the lives and social media feeds of our favorite stars and dissect what happened in front of the camera, what went down behind the scenes, and everything you might have missed in between.

When you think of young, millennial superstars, there are a handful of names that land at the top of the list. Undeniably, Justin Bieber and Taylor Swift hold two of the highest seats on the pop-culture totem pole. Their careers, for the most part, have progressed adjacent to one another after Bieber opened for Swift on her 2009 Fearless tour. Naturally, they have their independent relationships with Selena Gomez in common, too. Today, they’re most connected via The Great Scooter Braun Conflict of 2019. It leaves fans wondering — are Taylor Swift and Justin Bieber friends? Were they ever? I guess my response is: Define "friends."

If you mean, "Are they texting about the latest Bachelorette episode and grabbing happy hour on the weekends?" the answer is: Hell no. If you mean, "Are they civil with one another as musical colleagues?" that’s more like: Sometimes? However, their relationship’s foundation isn’t built on nothing. Swift bringing Bieber along for her Fearless tour was no small thing and Bieber has given her plenty of credit for helping his career back in the day. For better or worse, Bieber’s previous relationship to Selena Gomez seems to have influenced where he and Swift stand, too.

Here’s a look at their dynamic. 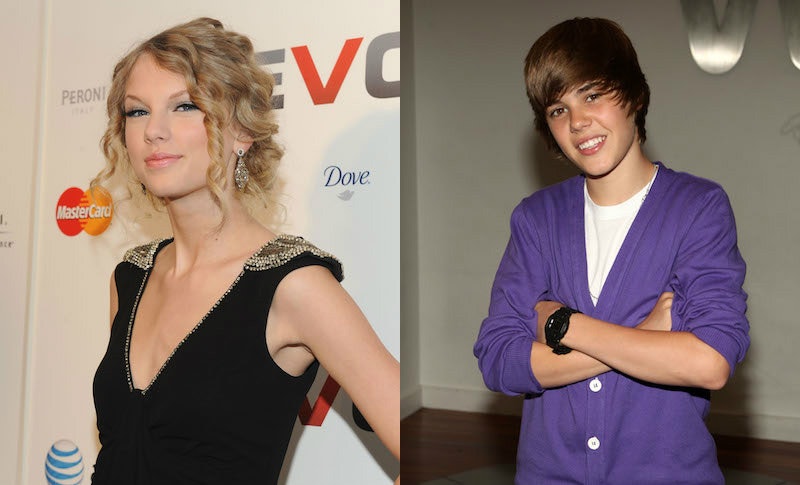 For reference, this is what Swift and Bieber looked like in 2009. Swift’s biggest hit was arguably "You Belong With Me" and Biebs was repping "One Less Lonely Girl." They were about 19 and 15 years old, respectively. Swift brought Bieber along for her Fearless tour where he won the hearts of young fans and hairstylists everywhere. There’s no denying it — it was a stellar opportunity for Bieber to get in with the millennial crowd and launch his music career. 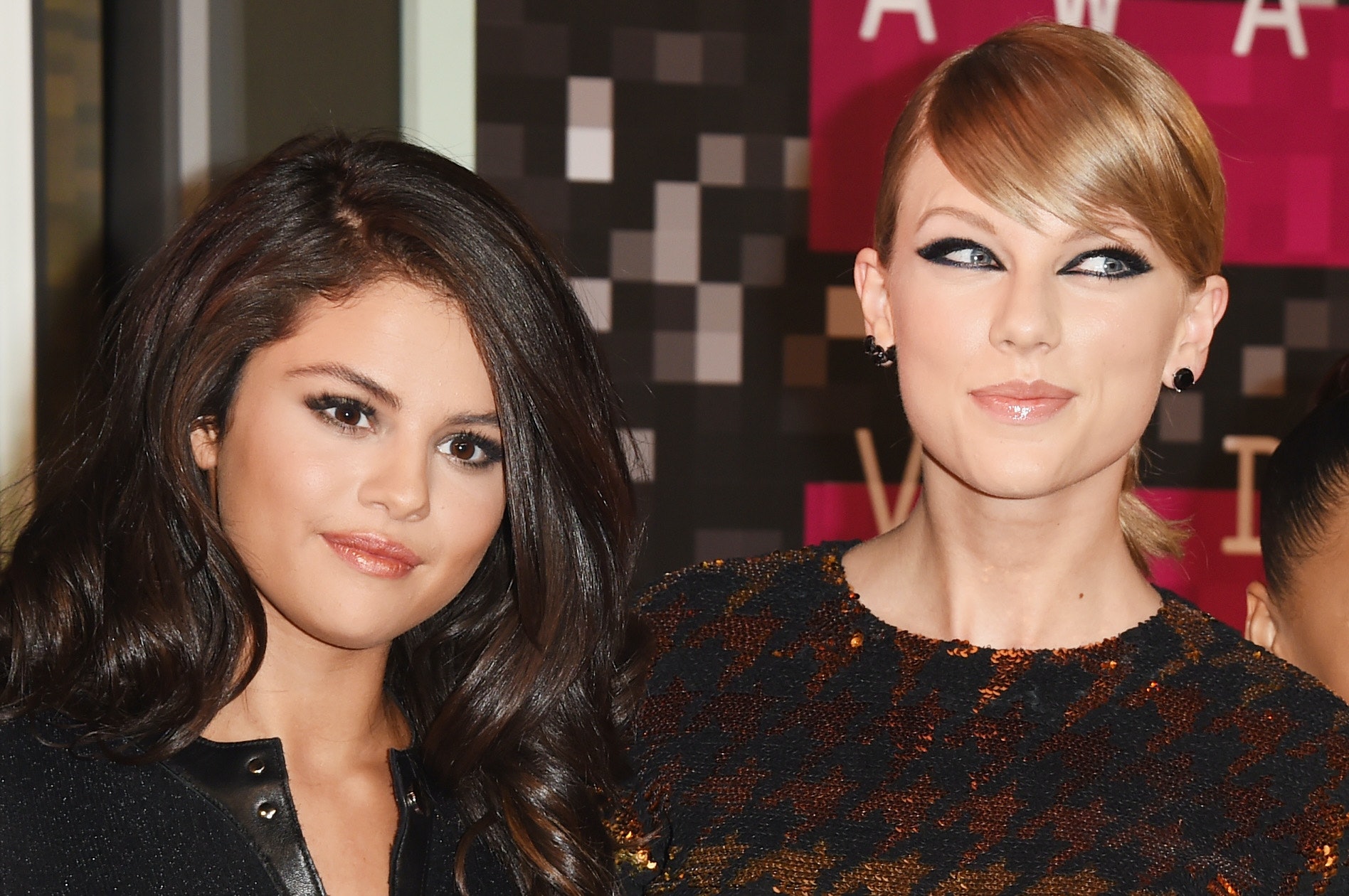 Fans were rooting for Bieber and Gomez almost as hard as we were all rooting for Tiffany in that one episode of America’s Next Top Model, but alas, it was not meant to be. Today, Bieber is happily married to Hailey Baldwin and Gomez is moving on with her love life and career, but that doesn’t mean their love saga just disappeared into the ether. Swift stood by Gomez’s side through thick and thin, which meant all of the ups and downs with Bieber, too.

Sure, was she grossed out by him at the 2013 Billboard Music Awards when he and Gomez were in a "cordial" faze and decided to hug hello? Yeah. We all saw it. But hey, that’s a fair response to your besties hot-and-cold boyfriend, right?

In fact, fans are actually now wondering if there was a little bit more behind that gag face they don’t know about. It looks like Swift might have actually confirmed that Bieber cheated on Gomez back in the day thanks to the fact she liked a comment left by a fan that accused him of doing so. 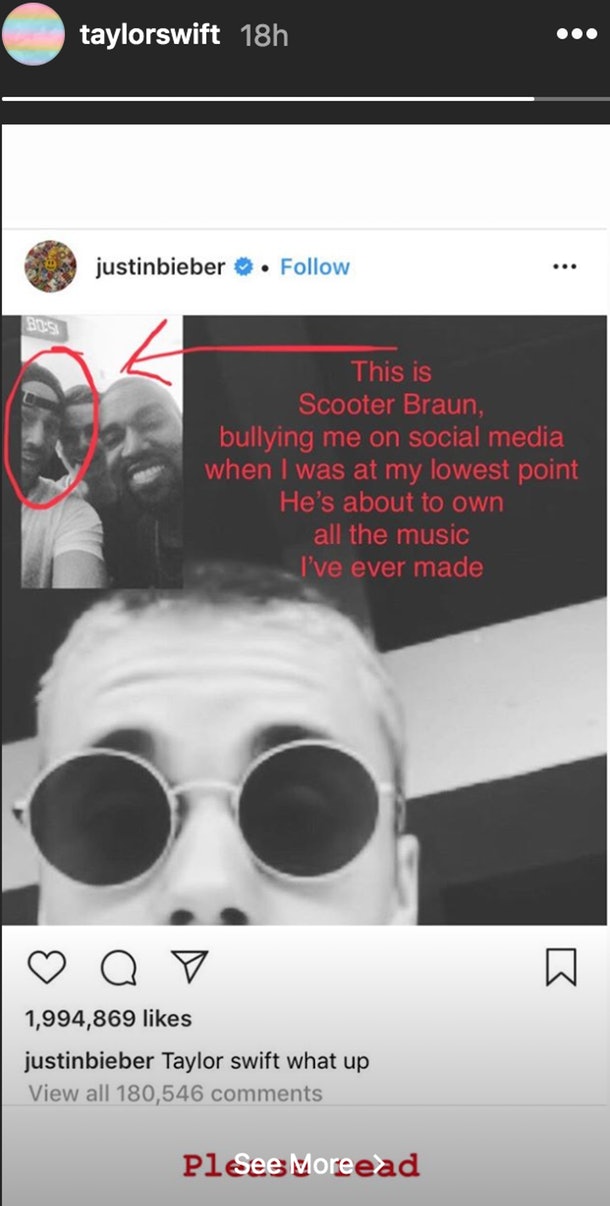 Today, Bieber and Swift are on clear opposite sides when it comes to Bieber’s manager, Scooter Braun, purchasing Swift’s old label, Big Machine Label Group — which included her entire music catalog. On July 1, Swift posted a passionate letter on her Tumblr account accusing Braun of bullying her in the past. She stated that his ownership over her masters is her "worst nightmare" and posted the above image that Bieber previously shared while FaceTiming with Braun and her other arch-nemesis Kanye West. At the time, Bieber captioned the post, "Taylor swift what up."

After Swift’s letter went public, Bieber responded by sharing an old-school throwback photo of himself and Swift (presumably from the Fearless days) with a long note that actually opened with an apology.

"Hey Taylor. First of all i would like to apologize for posting that hurtful instagram post, at the time i thought it was funny but looking back it was distasteful and insensitive," he began. "I have to be honest though it was my caption and post that I screenshoted [sic] of scooter and Kanye that said ‘taylor swift what up’ he didnt have anything to do with it and it wasnt even a part of the conversation in all actuality he was the person who told me not to joke like that."

To conclude, Bieber offered this suggestion: "So banter back and fourth online i dont believe solves anything. I’m sure Scooter and i would love to talk to you and resolve any conflict, pain or or any feelings that need to be addressed. Neither scooter or i have anything negative to say about you we truly want the best for you."

Swift did not respond to Bieber’s post at the time of publication, nor did Braun respond to her letter. For his part, Big Machine CEO Scott Borchetta wrote his own essay called "So, It’s Time For Some Truth" where he explained Swift was offered a deal that included 100% of her assets to be transferred to her immediately upon signing with the label again. However, she chose not to renew her contract. He also said that while he knew there was some uncomfortableness between Swift and Braun, he maintained that, from what he’d witnessed, Braun "was never anything but positive about Taylor."

The more I learn about the entertainment industry, the more I learn how truly small major celebrity’s social circles really are. This means Justin Bieber and Taylor Swift likely have more in common than not, but they seem to be missing one of the key ingredients in a true friendship — trust (and one lil collaboration song).