Arts organisations, nationally, are bracing themselves for job losses and closures as a group of leading artists prepare to take their case for fair pay and a $25 million annual funding boost for the Australia Council to the steps of Parliament House.

The Australia Council for the Arts is set to announce in coming weeks who will be granted funds as part of stage one of its first full multi-year funding round since the former Arts minister George Brandis controversially stripped out $105 million in funding. 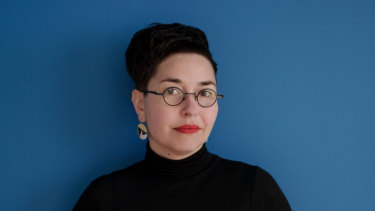 Esther Anatolitis: pushing for a $25 million annual increase in Australia Council funding over the next four years. Credit:Sarah Walker

The National Association for the Visual Arts' (NAVA) executive director, Esther Anatolitis, says leading creators and small-to-medium-sized arts organisations are bracing themselves for disappointment on both fronts.

"Our Australia Council colleagues are doing their best to manage expectations, letting us know how likely it is that even fewer organisations will be funded this time."

Ms Anatolitis said the funding "storm" had been brewing since Senator Brandis's "unexpected, unexplained cuts ruptured the Australia Council's strategic plan just months after the Senator himself had launched it".

"As a result, organisations who support artist and industry development were no longer funded, philanthropy got inundated, corporate sponsorship was already drying up after the GFC, and so the storm continued to build. 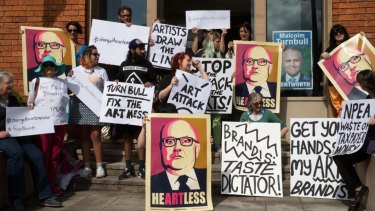 Artists protest cuts to the Australia Council in 2015.Credit:Janie Barrett

"Today, artists incomes and career prospects are declining, and the Australia Council has little-to-no capacity to pursue strategic initiatives that stimulate and develop the industry. Nor is the industry itself resourced to lead this much-needed work," she said.

The Australia Council has called for expressions of interest (EOI) from arts organisations for operations and activities from 2021 until 2024 and expects to notify applicants from August 12.

Theatre Network Australia has written to its members reminding them of the "dire financial situation" that the Australia Council faces with some, but not all, the Brandis money returned following industry protests.

It predicts fewer organisations will be funded over the next four-year period, due also to a lift in the grants' funding cap.

"Theatre Network Australia wants to acknowledge the despair many organisations and individuals will feel as the results of the EOI process become known," it wrote this month.

"This period will be very difficult as people face the possibilities of job losses and company closures, and many are likely to feel grief, anger and fear."

NAVA is advocating a minimal annual $25 million funding boost to Australia Council to catch up on cutbacks since 2014.

To this end, eight artists representing each state and territory will travel to Parliament House in Canberra to kick off Arts Day on the Hill on July 31, an initiative to build a wider appreciation among policymakers of the integral value of the arts to the nation's economy and cultural life.

They will argue for support via three new funds; one for fellowships, mentorship and professional development to create new work, investment in artist-led collaborations, and support for artist-run working models that meet operating costs and artists’ fees to encourage the best new thinking.

The artists, too, want to make fair pay at industry standards a condition of any public funding.

"We're talking to dozens of MPs across all key parties about the relationship between sustainable artists' careers and a healthy Australian culture," Ms Anatolitis said.

"We're talking specific policy initiatives, investment incentives and strategic opportunities. And we're making it clear that there's no time to be lost."

Victoria, the first state in Australia to adopt a creative industries approach to arts, has appointed an advisory group to refresh its creative industries strategy for 2020 onwards and opens its next round of arts grants with only minor changes to guidelines.