Australia is doing more to help Ukraine than some NATO members

The latest Australian commitment to Ukraine is a big lift in support at a time of growing concern that the war will last much longer than Western resolve.

The $100 million in Australian military supplies, including another 34 armoured vehicles, looks small next to the spending by the United States but this is deceptive. It is significant when compared with pledges from some European countries much closer to the conflict.

And there is a degree of symbolic power in the decision by Prime Minister Anthony Albanese to make a personal visit to Kyiv so he can witness the destruction and stand alongside Ukrainian President Volodymyr Zelensky. 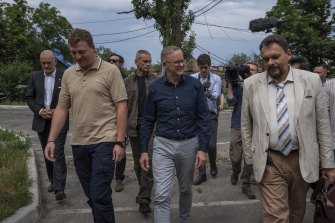 Anthony Albanese visits the city of Irpin on the outskirts of Kyiv.Credit:AP

Albanese follows a long line of European leaders who have visited Kyiv in recent months but the line is not long enough. For all the publicity over these visits, the truth is that the Australian Prime Minister has done more than some of his European counterparts.

Yes, many leaders from across Europe have shown their support for Ukraine with these visits. The list includes leaders from Austria, Czech Republic, Denmark, Estonia, Finland, France, Germany, Italy, Lithuania, Norway, Poland, Portugal, Slovakia, Slovenia and Spain as well as the United Kingdom.

But continental Europe should be embarrassed at the fact that Australia is contributing more to Ukraine than countries that are much more exposed to Russian aggression.

When the Kiel Institute of Germany checked the commitments made since war broke out, the Australian government pledges were worth more than those from Latvia, Denmark, Belgium, the Netherlands, Lithuania, Slovakia, Finland, Spain, Ireland, Austria and others. This was before the $100 million announced on Sunday. 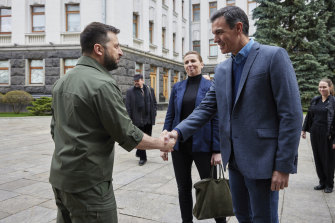 So Australia is doing more to help Ukraine at a national level than some NATO members. This is partly due to the scale of the Australian economy, which is roughly in line with that of Spain, but it is not just about relative wealth. As a percentage of its economy, Australian has contributed more than Ireland, Austria, Switzerland, Spain, Bulgaria, Slovenia and Romania in that order.

In fairness, European leaders can point to the collective pledges from the European Union as another way they are helping Ukraine. The relentless work by Ursula von der Leyen, the president of the European Commission, can overshadow national initiatives. Support from EU institutions has surpassed 15 billion euros. Support from the United States has surpassed 42 billion euros, according to the Kiel Institute’s Ukraine Support Tracker in June. (An update is due on July 6.)

The plain fact is that Australia is doing more than its share. While Albanese has visited Kyiv, some European leaders seem to be waiting things out.

The visit to Kyiv has extended Albanese’s time away from home, which is a political risk, but the visit was justified by the need to add Australian support to the effort to stop Russian President Vladimir Putin.

Australia has a stake in countering Russian aggression not only because Putin is a totalitarian killer but because a successful invasion will embolden Chinese President Xi Jinping, the co-signatory on the “no limits” partnership between Russia and China on February 4 – the Molotov-Ribbentrop pact of our times.

The great democracies are rediscovering the value of their alliances after Putin dragged Europe back to the 1930s with a war that seizes territory, bombards cities and inflicts terror on civilians. Even so, there is a nagging doubt about the willingness of the West to give Ukraine what it needs to win.

That is why Albanese was right to commit more to helping Ukraine and right to visit to represent Australia in Kyiv.