Nationals leader Barnaby Joyce has rejected forecasts for big renewable energy projects to create thousands of jobs in a shift away from fossil fuels, putting him at odds with his state colleagues as he holds out on a federal deal to cut carbon emissions to net zero by 2050.

Mr Joyce dismissed a $12.7 billion renewable energy plan in NSW by declaring it would not create the thousands of jobs it promised, amid growing frustration among Liberals at the damage to the federal government from days of delay on climate policy. 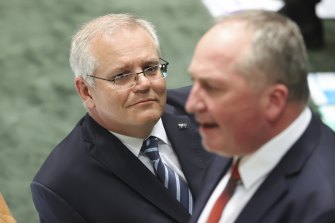 Labor leader Anthony Albanese attacked the “embarrassing” claims from Mr Joyce in a third day of debate in Parliament over the divisions within the government on the net zero target while the Nationals try to decide their position.

Mr Joyce declared the Nationals party room would be the “final arbiter” of its position but Prime Minister Scott Morrison told Parliament for the second consecutive day that the net zero target was a decision for federal cabinet.

Liberals want the policy finalised quickly before Mr Morrison leaves the country next Thursday for a G20 meeting in Rome and a United Nations climate summit in Glasgow where Australia will be asked to outline deeper cuts to emissions by 2030 and 2050.

Mr Joyce has formed a group of four colleagues to prepare a list of concerns about the net zero policy, telling Parliament on Wednesday that this would be done “within the next day” so he could put the concerns to Mr Morrison.

“We will get back to him because we are not grandstanding,” Mr Joyce told Parliament.

Nationals deputy leader David Littleproud, one of the group of four, said the document would not be a list of demands for money for projects, a point reinforced privately by other Nationals.

“We aren’t thinking about 30 pieces of silver. We are thinking more about the policy settings to ensure we protect regional Australia and help grow it,” Mr Littleproud told the ABC.

While Liberals have been willing to let the Nationals have the spotlight this week as Mr Joyce tries to get a consensus in his party room, they expressed frustration at the Deputy Prime Minister’s performance in question time on Wednesday and the hope that an agreement could be done within days.

The government is yet to release its updated roadmap to reduce emissions, its economic modelling, and its new projections for its 2030 emissions target while it asks Nationals and Liberals backbenchers to endorse the goal of net zero emissions by 2050.

In another sign of the division, Nationals Senate leader and cabinet minister Bridget McKenzie warned the negotiations could get “ugly” given objections to net zero from colleagues such as Queensland Nationals Senator Matt Canavan.

When Mr Albanese asked Mr Joyce what the modelling showed for the policy, the Deputy Prime Minister said he had seen the results of the modelling but not the modelling itself, while also saying the projections were not a “letter from God” and might not be accurate.

When Labor energy spokesman Chris Bowen asked Mr Joyce why he opposed renewable projects such as a $12.7 billion project in his own electorate of New England in northern NSW, Mr Joyce responded by asking whether people in Sydney would support wind farms off the coast.

“I actually disagree with him fervently that windfarms create thousands of jobs in New England,” Mr Joyce said.

“They don’t. They don’t, right? They can produce power, there is no doubt about that, but they don’t produce thousands of jobs.”

The project was announced in July 2020 with a claim from John Barilaro, the deputy premier and Nationals leader at the time, that it would attract $12.7 billion in investment, support 2000 construction jobs and support 1300 ongoing jobs.

Mr Albanese said Australia had an opportunity to become a renewable energy superpower but had been stymied by the government over three terms of Parliament.

Mr Albanese said it was “embarrassing” that Mr Joyce would lead the government as acting prime minister when Mr Morrison was in Rome and Glasgow.