Beyoncé sent fans into a frenzy when she shared an apparently unseen photograph of the moment she met ‘her princess’ Meghan Markle last week.

The singer, 37, delighted her 129 million Instagram followers with the previously unreleased picture of the intimate moment the two women chatted at the European premiere of The Lion King in London on Sunday night.

While photographs released on the night captured the two women hugging from behind, fans were delighted to see the new picture which shows the Duchess of Sussex beaming at the pop star from a low side angle. 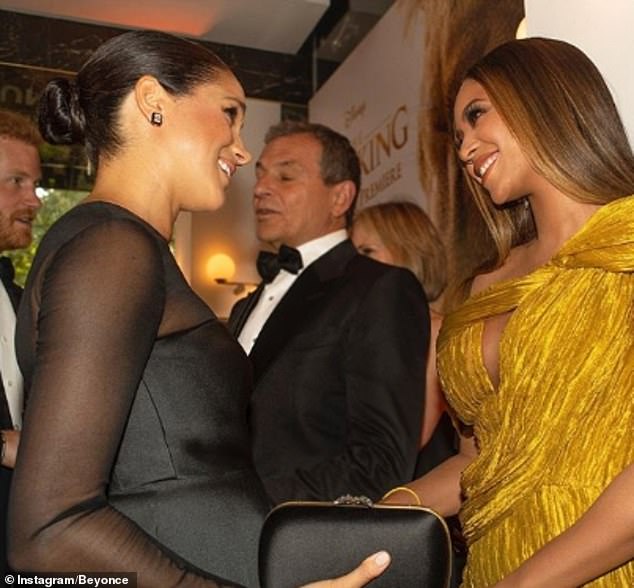 Beyoncé delighted her 129 million Instagram followers as she shared this previously unseen picture with Meghan Markle. The photograph captures the moment immediately after they hugged, and shows the women holding hands and beaming at one another 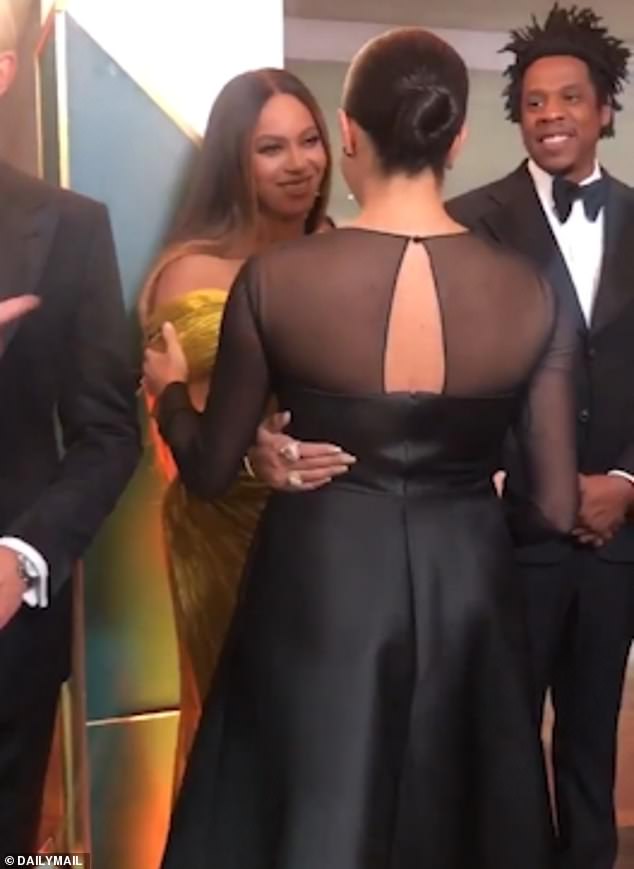 The meeting of the Duchess of Sussex and Beyonce, pictured, sent fans into a frenzy. A number of photos like the one above were published after the event

Fans were delighted by the previously unseen pictures, with some speculating that the popstar had brought her own photographer as part of her ‘crew’

Royal fans were left raving about the moment, with many speculating that Beyonce had brought her own photographer to capture the premiere.

One posted: ‘Another point of view of this iconic moment. This time from Beyonce’s crew.’

Another commented:’Nice, I’ve only seen back shots. Beautiful.’

The photograph, which was shared as part of a gallery of images from the event, shows the women holding hands while beaming at one another. 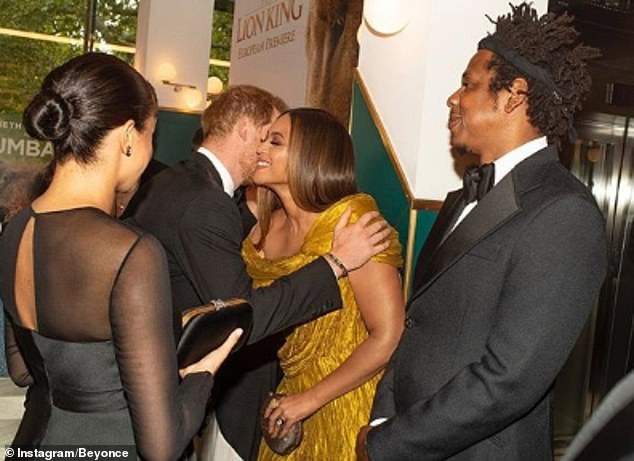 Beyoncé also shared a different, closer angle of the moment she embraced Prince Harry at the European premiere of the film, pictured

It appears to have been taken immediately after Beyoncé and Meghan met for the first time and shared a warm embrace.

Beyoncé shared the unseen picture alongside a gallery of snaps from the event, including one leaning in to embrace Prince Harry.

While the photograph is almost identical to the one shared on Sunday, it offers a closer glimpse of the embrace from a slightly different angle.

Dozens of photos capturing the meeting, including the one above, were shared shortly after the European premiere on the Lion King

Beyoncé greeted the Duchess with ‘Hi! … my princess,’ referring to her Brits acceptance video this year. In February the couple pre-recordered their acceptance speech after winning a BRIT award and it included a spoof painting of Meghan dressed as a princess –  in a tiara and pearls.

The premiere is believed to be the first time the two women have met in person, but Beyoncé is known to be a fan of the royal, and paid tribute to her on her website during Black History Month.

The singer and her husband Jay-Z also offered the Duke and Duchess of Susse parenting advice last night, as they attended the glittering European premiere of The Lion King, telling the new parents to ‘always find time for themselves.’ 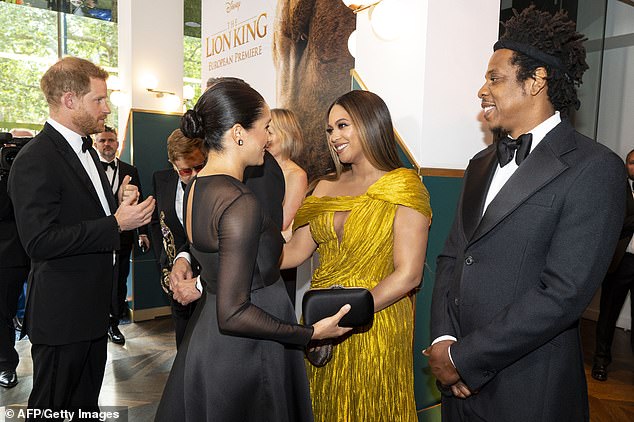 Meghan beamed at Beyoncé and Jay-Z as she chatted to the megastar duo at The Lion King in Leicester Square on Sunday evening. The popstar told the Duchess that she ‘loved’ the royal couple, and declared baby Archie ‘so beautiful’