Pete Davidson and Machine Gun Kelly are the bestest of friends. And if you need convincing get a load of this: they took a trip to the nail salon for some matching manicures and good gossip session.

Pete Davidson, MGK Strip Down to Calvin Klein ‘Undies’: ‘Did We Nail It’ 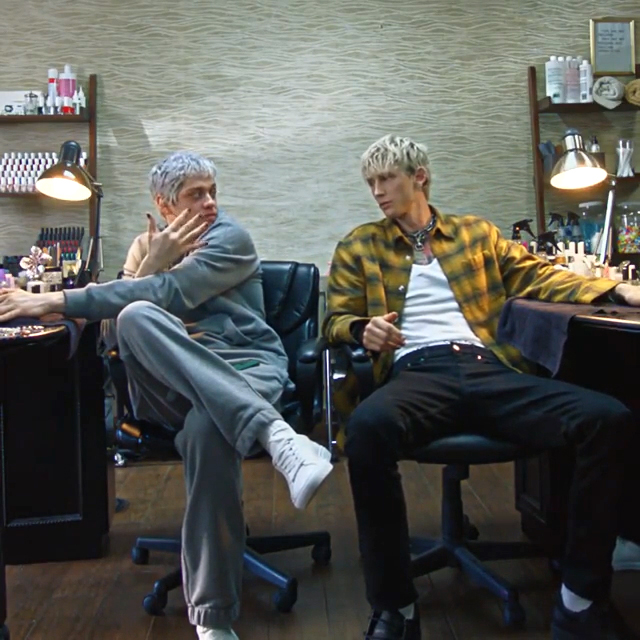 While sitting side-to-side in their swivel chairs, the two dished on everything from party stories to their thick-as-theives friendship. Of course, they also took some time to compliment one another on their top-notch polish.

Megan Fox and MGK Chained Themselves Together With Crazy Nail Art

“I’m glad you’re trying something new,” The King of Staten Island star joked to his buddy, referencing the fact that Kelly wore pink polish for his launch party last week. To switch things up, the singer asked for a “black lightening bolt or something.”

“Rock and roll, dude,” the Saturday Night Live comedian, who opted for “dark wizard vibes” for his manicure, joked.

Upon entering their drying stage of their salon outing, the pair started to reminisce on their spontaneous Calvin Klein photo shoot, which went down on the brand’s Instagram account the day prior.

For reference, the duo comically spitballed ideas for a potential underwear campaign. In the end, the Instagram Live concluded with both Davidson and Kelly stripped down to their Calvins joking about what poses they would whip out for a professional shoot.

In the 24 hours that passed, it seems that the two have continued the conversation and come up with a handful of new posing possibilities.

“I got you this for the second part of the shoot later,” Kelly said to Davidson, handing him a supersized rice crispy treat that resembled a loofah.

Davidson responded: “For when we’re in our bubble bath? I still think we should be in a bubble bath and we should wash each other in our Calvins, in our undies, and feed each other apples and stuff.”

The two kicked off their modeling careers earlier this week, when Davidson announced that he would be taking over Calvin Klein’s Instagram account.

In addition to changing the brand’s icon to his face, he shared a selfie to their grid. “I got Instagram,” he captioned the post. Kelly responded, “Are you gonna post us in our undies.” And well, that’s exactly what happened.