Home » Lifestyle » ‘Big deal’: World leaders head to Sydney in bid to push back on China

The Sydney Morning Herald and The Age can reveal Albanese has selected his hometown to host the first leaders-level meeting of the Quadrilateral security dialogue to be held in Australia.

Once dismissed as a diplomatic irrelevance, the Quad, as it is commonly known, has emerged as a key vehicle for the four democratic member nations to collectively push back against China’s growing influence in the Asia-Pacific. 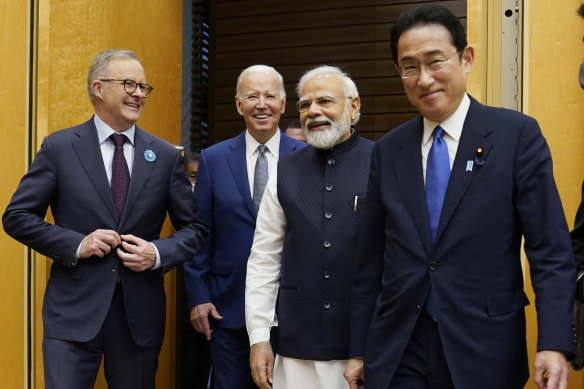 Chinese foreign minister Wang Yi has decried the grouping – which represents a total population size of 1.8 billion – as an “Indo-Pacific NATO,” accusing it of “trumpeting the Cold War mentality” and “stoking geopolitical rivalry” in the region.

Sources said, while plans are still being finalised, the summit is expected to be held in late May or early June following the G7 summit in Japan.

The Sydney visit will be the first time Biden has travelled to Australia since he entered the White House almost two years ago and the first such trip by an American president since Barack Obama in 2014.

Albanese has invited Biden to deliver a speech to a joint sitting of Parliament in Canberra while in Australia.

Modi, who last visited Australia in 2014, is expected to hold an event with Australia’s large and growing Indian diaspora during the trip.

The government set aside $23 million for the summit in the October budget, reflecting the significant logistical and security challenges involved in running the event.

“This is a big deal for Sydney and for Australia,” Michael Fullilove, the executive director of the Lowy Institute, said, noting the Quad summit will be the most significant diplomatic gathering in Sydney since the Asia Pacific Economic Co-operation forum in 2007.

Fullilove said Albanese had a packed year of diplomacy ahead, with two trips planned to India as well as visits to the United Nations in New York and the next international climate change conference in Dubai.

“The Quad is the most prominent stage of all: four powerful countries with four influential leaders,” he said.

Previous Quad summits have produced plans for the nations to work together on tracking illegal fishing vessels, create a reliable supply chain for critical minerals and partner on technologies to tackle climate change.

Albanese, who made a point of choosing to live at the Lodge rather than Kirribilli House, has been keen to elevate the status of the nation’s capital.

But Canberra was ruled out as an option for the Quad summit because it does not have enough suitable accommodation for the foreign leaders’ sizable entourages.

Biden typically travels overseas with his presidential limousine, known as “the beast”, and a motorcade of dozens of vehicles.

Biden hosted the first in-person Quad leaders’ meeting in Washington last year, followed by a meeting in Tokyo in May just days after Labor’s election victory.

Michael Green, the chief executive of the University of Sydney’s United States Study Centre, said: “The combined power of these four maritime democracies is a reminder to China it could face a united front if it pushes too hard.”

Green, who played an important role in the formation of the Quad as an adviser to George W. Bush, said the grouping represents a “fantastic bargain” for Australia, offering an equal seat at the table as three of the world’s biggest economies and military powers.

Biden’s national security adviser, Jake Sullivan, has said the Biden administration sees the Quad as a “foundation upon which to build substantial American policy in the Indo-Pacific region”.

Former prime minister Kevin Rudd has said Beijing regards the Quad as “one of the most consequential challenges to Chinese ambitions in the years ahead”.