The review paper, published Thursday in the Communications Earth & Environment journal, found the warming climate contributed to elevating the threat, from drying out fuel loads to worsening bushfire weather. 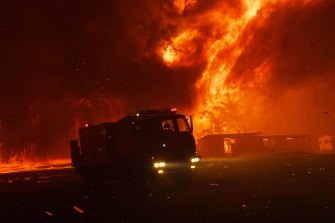 The risk of bushfires will intensify faster than expected, researchers say.Credit:Nick Moir

"There are multiple ways where the effects of climate change are acting to increase fire risks," said Nerilie Abrams, a climate scientist at Australian National University and lead author of the paper. "What you expect to see is not just a gradual increase…but a very rapid intensification of fire risks."

In particular, the projected continued reduction in winter and spring rainfall was likely to pre-condition south-eastern Australia, particularly in Victoria, to forest fire.

Increased forest dieback in response to heat stress and the reduction in cool-season rainfall would add to the risks, the paper said.

Fire weather could also worsen, with "some evidence that these extreme front events [that draw heat from inland Australia to the coast] will become more frequent in southern Australia", the report said.

During the satellite era up to 2019, 60 such fire-induced weather events were recorded or suspected in Australia, the researchers found. During the 2019-20 fire season, at least 29 such events occurred including at least 18 in a single week. 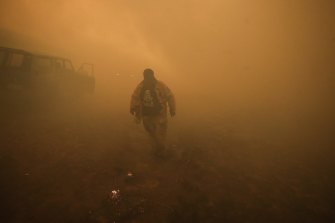 While communities can make some changes to adapt to the rising fire risks, they should also address what is driving the increase, specifically the rising greenhouse gas emissions, scientists said.Credit:Alex Ellinghausen

The week-long flurry had "previously undocumented impacts on winds and chemical composition into the stratosphere, and a planetary-scale radiative forcing effect equivalent to a moderate volcanic eruption", the paper found.

Driving the increased fire risk was how the warming climate was forecast to alter natural climate variability, such as increasing the likelihood of extreme El Nino events and positive phases of the so-called Indian Ocean Dipole that typically reduce rainfall in south-eastern Australia.

"[T]he potential exists for more frequent years with extreme hot and dry conditions in southeast Australia, beyond that expected from mean temperature and rainfall trends alone," the research found. "If this potential is realised, fuels in south-east Australia will be dry from winter to summer more often, and dangerous fire weather during fire seasons will occur more frequently.

Professor Abrams said that, while communities can seek to add adapt to the rising bushfire risks, it was important that governments examined why they were increasing and how they might be limited.

‘‘However, … if we can bring ourselves onto a low greenhouse gas emission pathway, these projected climate changes won’t be as extreme and will be easier to adapt to than if we were on a high-emissions pathway’’.