Home » Lifestyle » Boy, 7, waits outside school gates with flowers to win girlfriend back

Boy, 7, waits outside school gates with flowers to win girlfriend back

Sweet moment schoolboy, 7, waits outside school gates with flowers wearing his favourite aftershave to win back ‘girlfriend’ who dumped him over his ‘bad attitude’ in class

A seven-year-old schoolboy has ‘set the standard’ for men everywhere after waiting outside the school gates with a bunch of flowers and wearing his favourite aftershave to win back his girlfriend when she dumped him for his ‘bad attitude’.

Little Harley Glenwright, from Barnsley, South Yorkshire, returned home in tears after Sophie Clancy ‘broke up’ with him on his first day back in Year Three after the school holidays last Monday.

The youngster, who is being assessed for ADHD and autism, had ‘got angry’ with his new teacher, and his slip in behaviour had not impressed his girlfriend of two years. 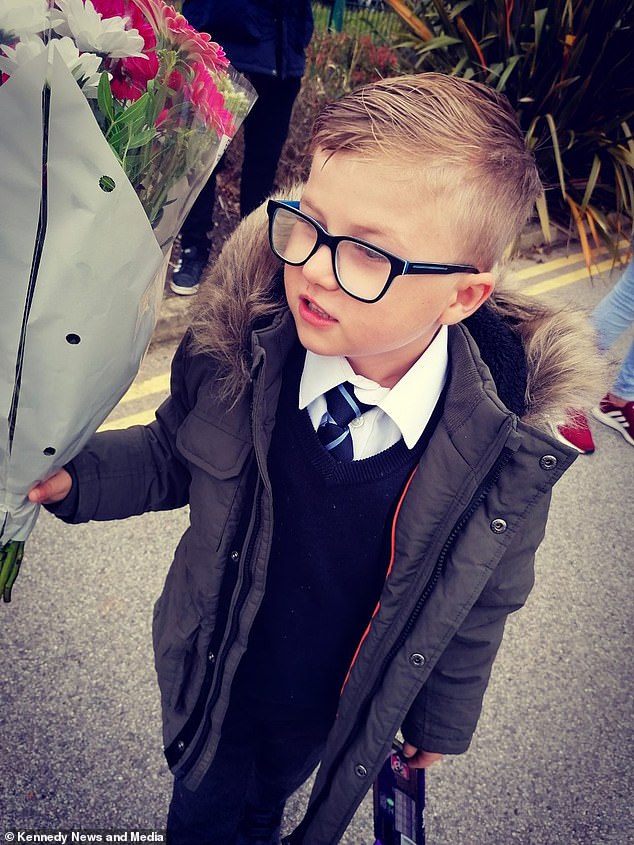 Seven-year-old Harley Glenwright, from Barnsley, South Yorkshire, returned home in tears after his girlfriend of two years Sophie Clancy ‘broke up’ with him on his first day back in Year Three because he was ‘a bit cheeky’ 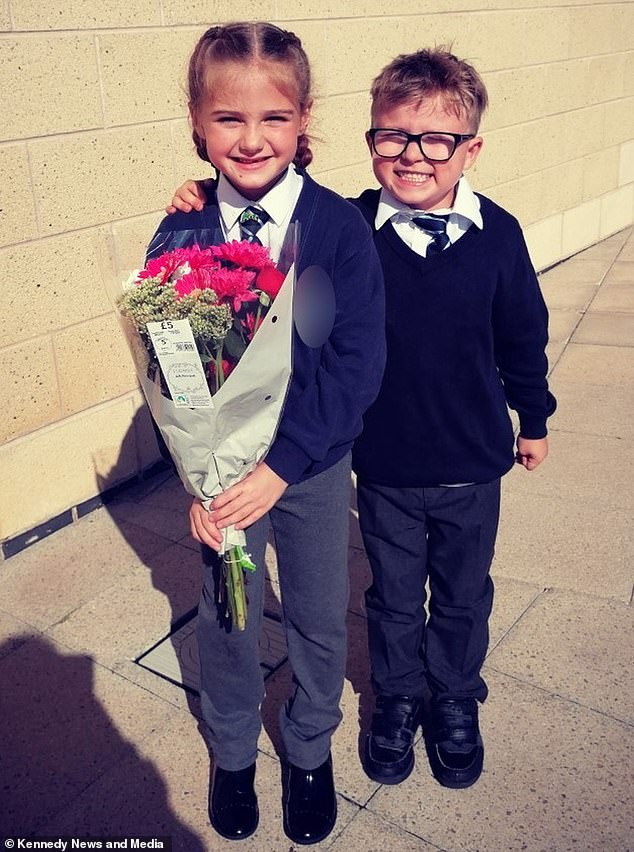 In a bid to win Sophie back, he asked his mother Stefania Finch, 26, if he could buy her some flowers and he stood at the gate with them waiting for her and wearing his favourite aftershave to say sorry

But determined to make amends for his manners, the seven-year-old asked mother Stefania Finch, 26, if he could buy Sophie some flowers to say sorry, before putting on his favourite aftershave for her.

A heartwarming photo shows Harley clutching the flowers while waiting eagerly outside the school gates – yet his sweetheart didn’t show because she was late to school, leaving the lad to reluctantly go in alone.

But the heartbroken schoolboy persevered and was able to hand the bouquet over after school finished – prompting Sophie to declare she ‘loved him to bits’ before giving him a huge hug.

The little boy’s actions were praised by Sophie’s mother, who said ‘if all men grew up to be like him, there’d be a lot more happy women’. 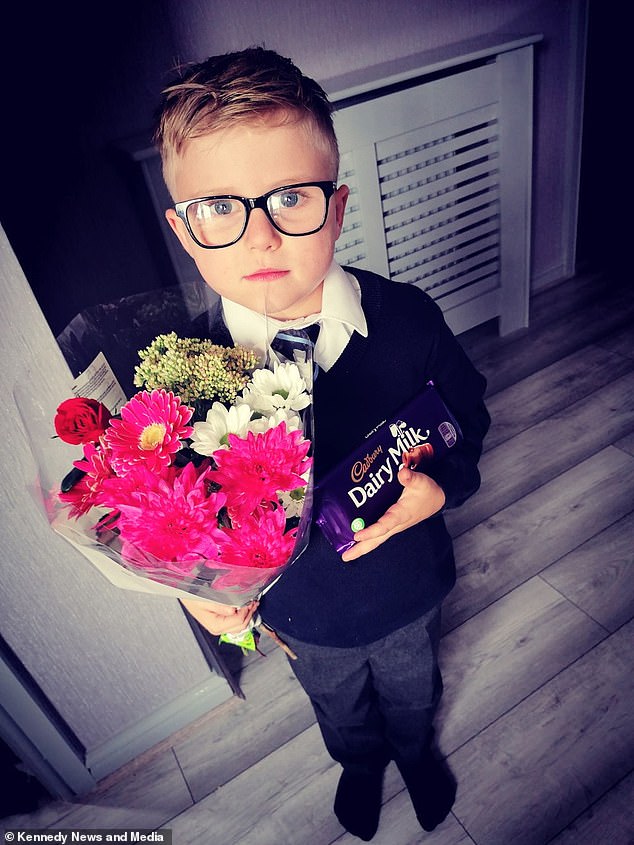 Surprised Sophie declared she ‘loved him to bits’ before giving him a huge hug and her mother  praised by the boy’s mother’s actions, who said ‘if all men grew up to be like him, there’d be a lot more happy women’

Stefania said: ‘Harley ripped the flowers out of my hand and gave them to her with a big smile. She gave him a right big cuddle. This is his way of saying sorry.

‘People are really invested in their story online. They’ve been saying “give me updates”.

‘I’ve told Sophie’s mum Jacklyn that Sophie is welcome to come round for a little play date.’

Harley first met Sophie when she joined his class two years ago after moving to the area and they have been close ever since.

When schools were closed earlier this year due to coronavirus, Harley still talked about his classmate and looked forward to seeing her again when lockdown was lifted.

Stefania said: ‘Coronavirus happened so school got suspended but he spoke about her throughout that period every now and then. 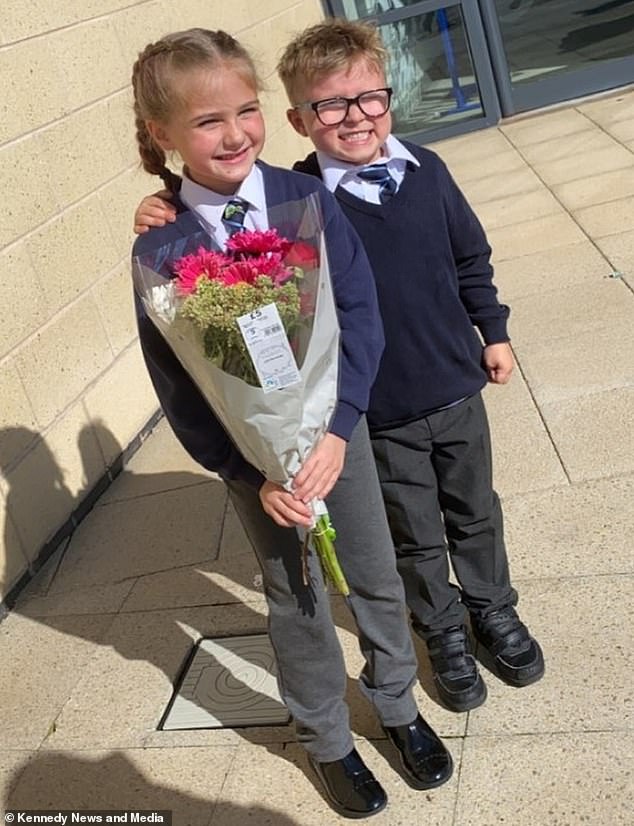 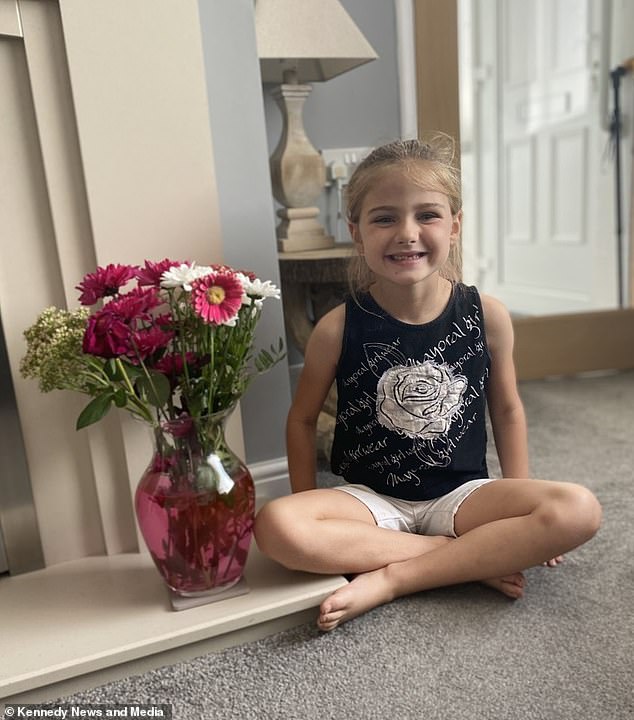 Sophie was extremely pleased with her boyfriend’s gesture, placing the pink and white bouquet into a pink vase and posing proudly with them at home

‘My son also has additional needs and he’s waiting for an assessment for ADHD and autism so he can find school extremely challenging and have challenging behaviour at school sometimes.

‘Last Monday, he came out of school and he’d had a bad afternoon with his new teacher and Sophie wasn’t very happy about it, so she broke up with Harley.

‘He came out of school and said, “I’m so upset Mum – Sophie’s broke up with me because of my attitude”. He got angry at the new teacher and it made her sad.

‘I said: “What would you like to do? We can go home and write a letter or draw a picture for her?”. But he said he’d speak to her the next day.

‘I said, “Do you want to go to school and get her some flowers or something?”. In the past if he’s had a bad day with staff at school during a meltdown we’ve gone to get them some flowers.

‘He said, “Yes Mum but I’m still upset”, so we went back home and I made his favourite tea – pie and mushy peas.

‘We got to the shop and he was so excited. He picked the specific bunch of flowers because they had a rose in. Then he picked her a chocolate bar. 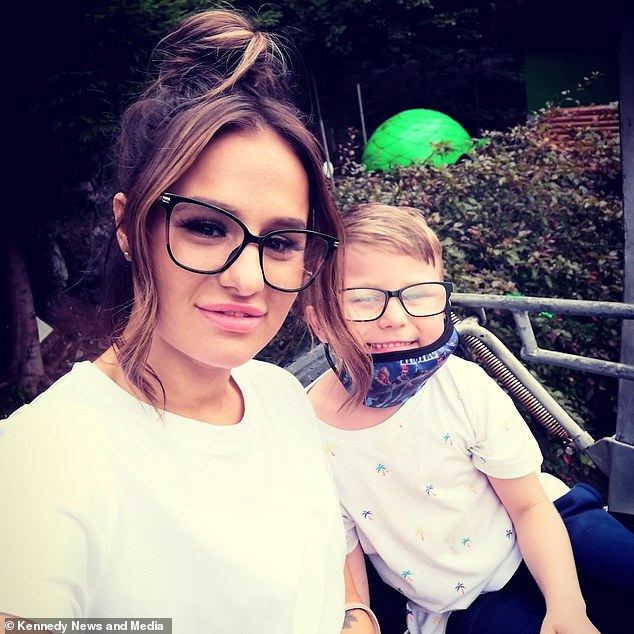 Stefania, pictured with son Harley, said the seven year old came out of school and said ‘I’m so upset Mum – Sophie’s broke up with me because of my attitude’ and told her he had been angry at the new teacher which made Sophie sad 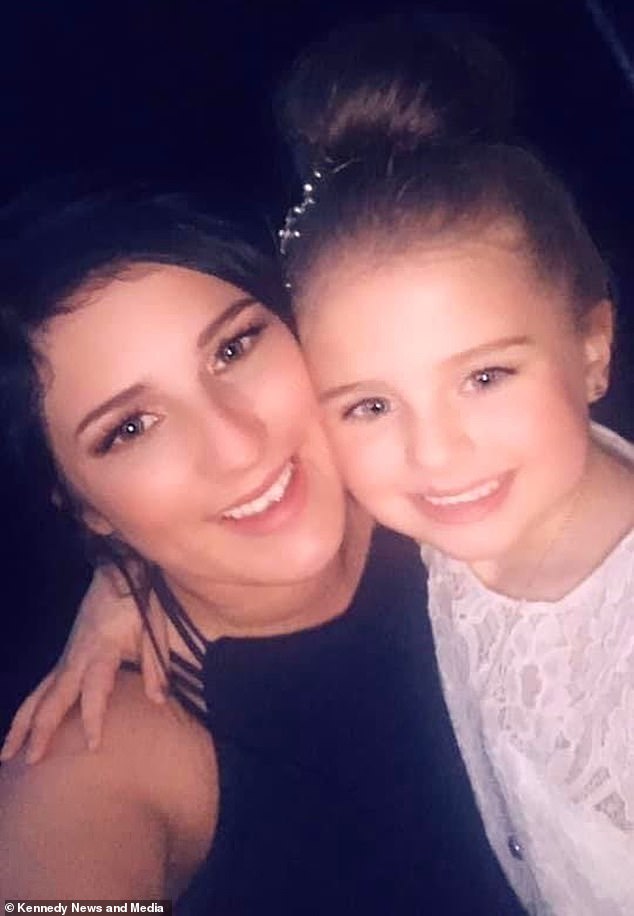 After Sophie was handed the beautiful bunch of flowers, she announced to her mother, Jacklyn, 29, (pictured together) ‘I love him to bits’ before vowing to return the gesture

‘I asked him how he’d like to do the morning and he said “Well, I need you to set your alarm for 5am”.’

Despite his optimism for a very early start, the eager little lad eventually woke up at 7.30am before spraying his favourite aftershave and doing his hair for Sophie.

Stefania said: ‘We had our breakfast really quick, he brushed his teeth and put his favourite aftershave on, did his hair all nice, then we set off early so we didn’t miss her.

‘He didn’t want to wait in line with his class so he could keep an eye on her. His class had to go in and she didn’t arrive on time.

‘I promised I’d bring them back after school. I spoke to Sophie’s mum about it and she said she’d wait around after school.

‘[After school] he came running out saying “Me and Sophie are back together – she gave me a hug and we’re okay”.

‘He told me, “I’m going to try not to get angry at school anymore”. She’s helping him at school.

‘A lot has happened for them in such a short space of time.’

After Sophie was handed the beautiful bunch of flowers, she announced to her mother, Jacklyn, 29, ‘I love him to bits’ before vowing to return the gesture. 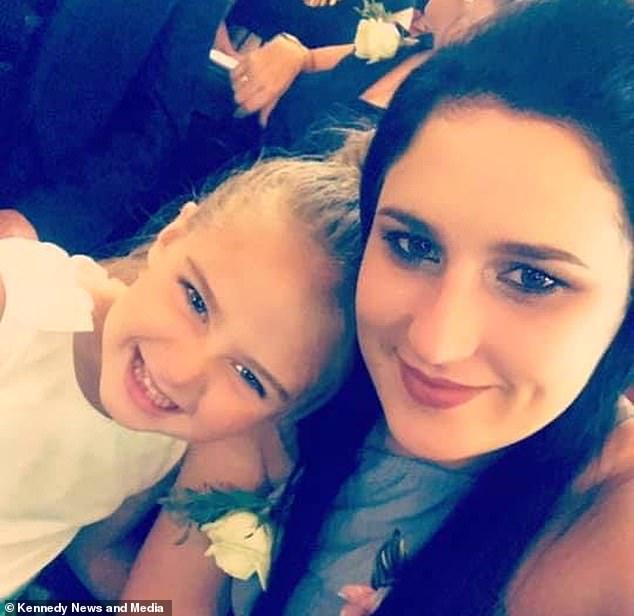 Jacklyn, from Barnsley, South Yorkshire and pictured with Sophie, praised Harley’s mother and father for doing a ‘very good job’ and said he had shown Sophie how she deserves to be treated 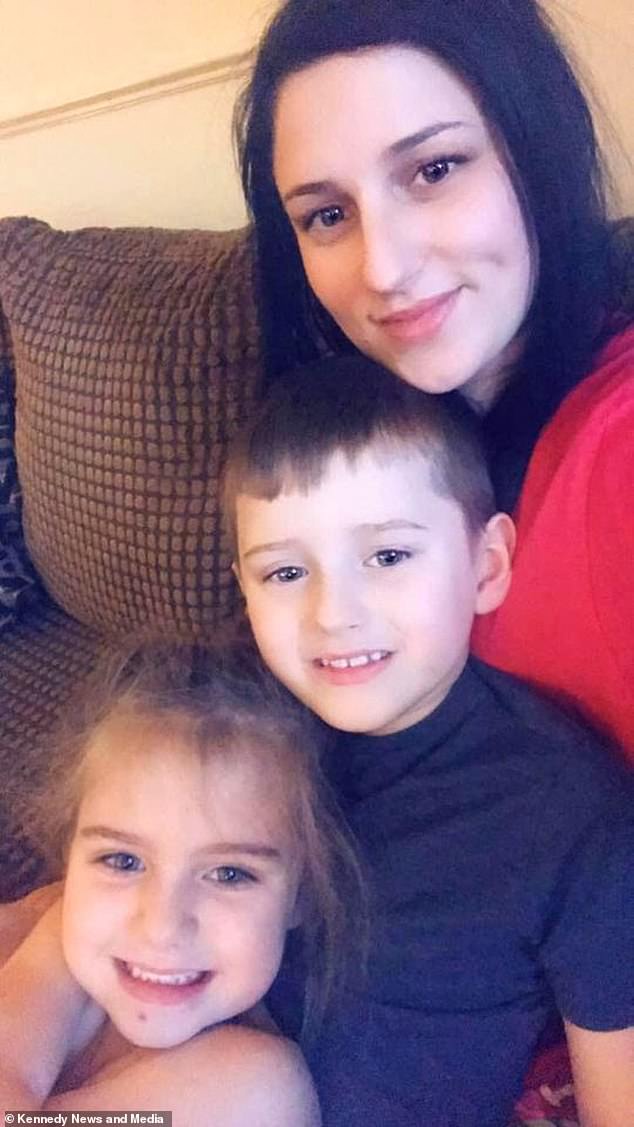 The sweet young boy was one of the first friends Sophie made when she moved to her new school two years ago. Pictured: Seven-year-old Sophie Clancy with mum Jacklyn Clancy and brother TJ, nine

Jacklyn, also from Barnsley, South Yorkshire, said: ‘They’re so sweet together. My heart completely melted. Bless his heart – wanting to do that for her.

‘I asked Sophie what happened and she said “Well he was a bit cheeky Mum and I didn’t like his attitude so we broke up”.

‘They were back together before [this]. I’m glad they sorted it out between themselves.

‘Sophie was so thankful for her flowers and chocolates. She said, “I love him to bits. He’s so nice and kind to me”.

‘As soon as we got home, she was saying, “Mum, put them in a vase”. It’s been the best thing that happened to her since lock-down.’

Jacklyn has now praised Harley’s mother and father for doing a ‘very good job’, and admits he’s shown Sophie how she deserves to be treated.

Jacklyn said: ‘They’ve known each other about two years and he was one of the first friends she made at her new school.

‘They’d been talking in school and he said “I hope my mum fetches them because she forgets things. I’ve got you a nice present”.

‘It was such a good thing to see. This was out of the blue for her.

‘In a way, he’s set the bar for her. That’s how she should be treated.

‘His mum and dad have done a very good job. If all men grew up to be like him, there’d be a lot more happy women. He’s set the standard.

‘I can’t get my boyfriend to get my flowers even on my birthday. He’s feeling the pressure now.

‘I said, “Come on, step up your game”. He hasn’t got a romantic bone in his body.

‘Sophie wants to get him something back like a toy or something.’