The long drive from NSW begins just after sunset. Inside the car, the precious cargo is safe inside purpose-built padded boxes that contain native grass to make their occupants comfortable, and crickets and mealworms for overnight snacks.

The car, chosen because it moves smoothly, is silent inside with all alarms and beeps disabled. Alongside the driver a Zoos Victoria staff member makes the 11-hour overnight trip to Victoria, diligently monitoring the temperature and humidity inside the vehicle.

In this delicate operation – a collaboration between the two states and the Commonwealth – 17 critically endangered eastern bristlebirds were captured in the Booderee and Jervis Bay national parks in NSW in early April. Once the sun set, they were driven 850 kilometres via the coastal highway to the southernmost tip of mainland Australia — Wilsons Promontory National Park. 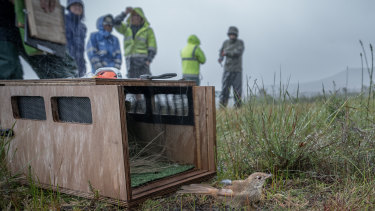 An eastern bristlebird is released from its travelling box into the fresh air at Wilsons Prom.

This was the first time a translocation – the capture and release of animals in the wild to establish or augment a population – of the easily stressed and timid eastern bristlebird had been attempted between Australian states. Happily, all of them survived the trip. The aim was to increase the species’ population and long-term prospects of survival.

Wildlife translocations are complex and expensive procedures, and an option of last resort. Usually, the preference is to reinvigorate populations in their home range.

These eastern bristlebirds were the first species introduced to Wilson’s Prom since the Victorian government announced last year it would be transformed into a climate refuge and predator-free sanctuary for endangered wildlife. Eventually, a 10-kilometre predator-proof fence will be built across the Yanakie Isthmus – the narrow stretch of land that connects the prom to the mainland.

A small-to-medium-sized brown bird with distinctive bristles at either side of its beak, the eastern bristlebird is at risk from bushfires, which have increased in frequency and intensity because of climate change.

When they were released, most fluttered into the surrounding heathland, said zoologist Jordan Roberts, a natural environment project officer at Victoria’s Department of Environment, Land, Water and Planning.

“I felt ecstatic and so relieved because there were so many months of work and stress put into the planning, and making sure the birds arrived at Wilsons Prom intact.”

In NSW, there are about 1500 eastern bristlebirds but in Victoria, there is a tiny population of about 40 to 180 with low genetic diversity at Howe Flat in the Croajingolong National Park in East Gippsland.

The success of this translocation was a much-needed glimmer of positivity in a week when the five-yearly State of the Environment scorecard showed Australia suffered catastrophic losses of wildlife and habitat, and conservationists pleaded with the Albanese government to invest more to halt the escalating rate of species extinction.

Environment Minister Tanya Plibersek said the report detailed how important it was to act to protect Australia’s endangered species.

“We are working across jurisdictions with our Victorian and NSW colleagues to ensure these bristlebirds have the best possible chance to establish a new population,” Plibersek said. 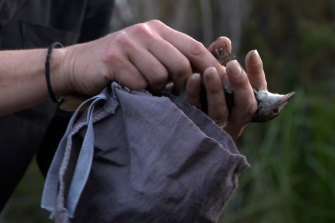 It’s not the first time the endangered state of bristlebirds has prompted human intervention. During the Black Summer bushfires of 2019-20, bird handlers flew on a Defence Force Chinook helicopter to capture an “insurance population” of 15 eastern bristlebirds before the fires swept through Howe Flat and decimated their habitat. They were almost wiped out in Victoria.

In recent history, there have been no bristlebirds at Wilson’s Prom, but there is anecdotal evidence naturalists saw and heard them there between the late 1800s to 1970s, Roberts says. Scientists believe the birds were widespread throughout southern Victoria before British colonisation.

Wilson’s Prom is buffered by the cooling air of the Bass Strait against the worst pressures of climate change and increasing temperatures, says Dr Mark Norman, the chief conservation scientist at Parks Victoria. “It’s always 5 or 10 degrees cooler than the mainland, so it’s an ideal place,” he adds.

Roberts says the findings in the State of the Environment report this week were “the kind of thing environmentalists have been screaming for many, many years”, adding that eastern bristlebirds are the perfect example of a species that will be affected by fires because of increasing temperatures.

“Obviously, the bristlebirds coming to Wilsons Prom is a wonderful story, but unfortunately translocations like this will become so much more frequent and common,” she said.

“We’re working across jurisdictions to protect our unique biodiversity and delivering record investment … to foster our precious native plants and animals,” D’Ambrosio said.

Her NSW counterpart, James Griffin, said the partnership with Victoria meant NSW could share its expertise to save this Australian species.

The translocation was a partnership between DELWP, Parks Victoria, Parks Australia, the NSW Department of Planning and Environment, Zoos Victoria and Currumbin Wildlife Sanctuary.

Get to the heart of what’s happening with climate change and the environment. Our fortnightly Environment newsletter brings you the news, the issues and the solutions. Sign up here.