I’ve always loved Bumble’s "women message first" premise. As I learned during my eighth-grade winter formal, when I lingered in the corner of the school cafeteria for literal eons while my "boyfriend" worked up the courage to ask me to slow dance, waiting around for guys to make the first move isn’t super fun for me as a cis, straight person. But even for someone like me, who likes sending messages to matches, figuring out what to say can sometimes be tricky. Bumble’s new emoji reaction feature changes that.

As of Oct. 13, users of all genders in the United States, United Kingdom, and Canada on Bumble Date can make the first move by sending an emoji. The emoji will only be shared if the two people match, and there’s no need to add a message — unless, of course, you’d like to. There are nine emoji options to choose from, including the heart-eye smiley face, the "see no evil" monkey, and a pair of clapping hands. The addition eases the pressure on sending that first message. I spoke to some avid Bumble users to get their take on the new feature.

"I think it’s a great idea because oftentimes, I want to send a message but don’t really know what to say," says Selina. She hasn’t used the feature yet, but would like to. She says she typically finds herself at a loss for words when people don’t put much effort into their profile, so there isn’t much material to inspire a message. "I think this feature is a cute and flirty way to help alleviate some of the pressure!" 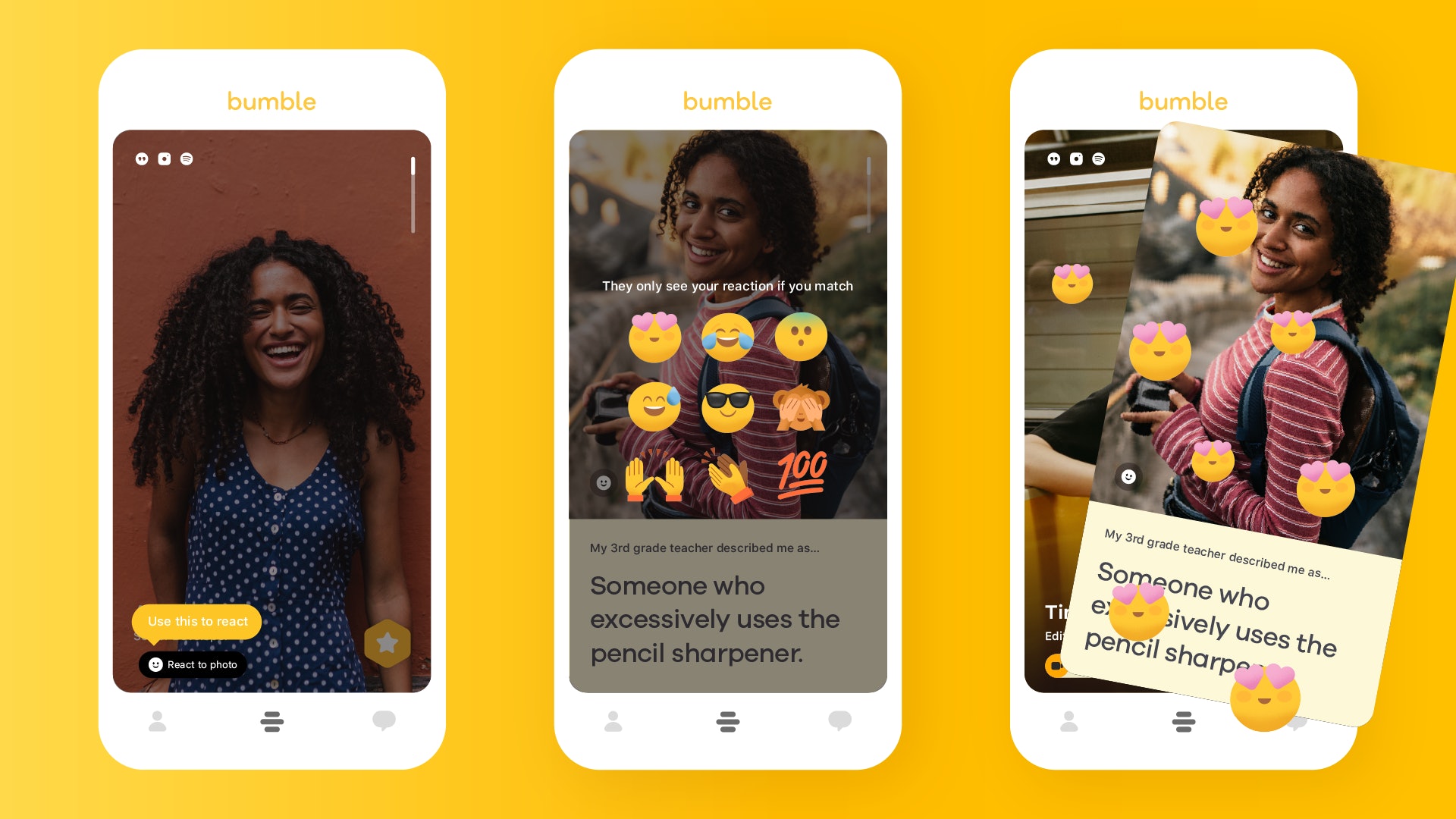 Saanchi agrees. "I think it would definitely make conversations easier," she says, though she hasn’t yet tried it out. "Usually, it takes some time to reach a comfort level, but when you can start a conversation with a reaction, that would be a great way to break the ice."

The emoji feature could serve as a low-pressure means to to kicking off a conversation. "Often when I match with women on Bumble, the match expires before either of us has figured out how to say hello, so this might make it easier," says Kate, who hasn’t yet used the feature. "When you’re messaging another woman, there’s more concern to make sure she’s comfortable and you’re not giving her unwanted attention; maybe for some women, an emoji would be a nice, friendly, un-intimidating way to say hi."

Meanwhile, Amanda appreciates the efficiency of sending an emoji, but isn’t sure it will always lead to conversations. "This feature will definitely save me the hassle of trying to come up with something more interesting to get a guy to respond to me, but not sure if it’ll make anyone more likely to respond once we’ve matched," she says. "Like, will a guy know to respond to that emoji or will he still be waiting for me to make the first move?"

The feature launched recently, so it’s too early to tell how it’ll change the way Bumble users interact with each other. If you genuinely love brainstorming what to say to your matches, then by all means, keep doing you. But if that feels like way too much work or pressure, having a simpler option can be pretty useful. I’ll send all the heart eyes and clapping hands to that.