Earlier today Australian of the Year Grace Tame addressed the National Press Club with a message for Australians to believe survivors of sexual abuse. 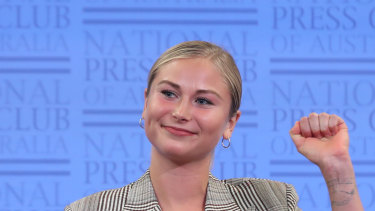 Australian of the Year Grace Tame during her address to the National Press Club.Credit:Alex Ellinghausen

“It is up to us as a community, as a country, to create a space, a national movement where survivors feel supported and free to share their truths,” Ms Tame said.

She was sharply critical of Prime Minister Scott Morrison’s decision last month to invoke his wife and daughters to explain his reaction to the allegations of rape made by former Liberal staffer Brittany Higgins against another former staffer.

“Coverup culture, the abuse of power, is not unique to parliament.”

If any of the content in this liveblog or press conference is distressing to you, help is available.

The federal cabinet minister accused of a decades-old rape is considering making a public statement today to declare his innocence after NSW police closed their investigation because they did not have enough admissible evidence to proceed.

The minister has spoken to others about going public after widespread conjecture about his identity and the allegations made to police last year about a rape in Sydney in January 1988.