Home » Lifestyle » Can Tony Burke be the bandleader on IR and Labor frontman one day?

Can Tony Burke be the bandleader on IR and Labor frontman one day?

Tony Burke thrives on the front line of political battles. But now Prime Minister Anthony Albanese’s workplace relations minister, leader of the House and close confidant faces his toughest assignment: bulldozing through industrial relations changes that would restore unions’ power by allowing them to bargain across businesses.

Passing the Secure Jobs, Better Pay legislation in the three sitting weeks left for 2022 shapes as the biggest test of 52-year-old Burke’s 19-year career in politics and six years in the union movement. His mission is to blast the controversial bill through a swift inquiry and past Senate crossbenchers David Pocock and Jacqui Lambie before Christmas, despite the public and private fury of the nation’s most powerful business groups.

Asked why the rush, Burke recites his mantra: Labor is determined to get wages moving again. 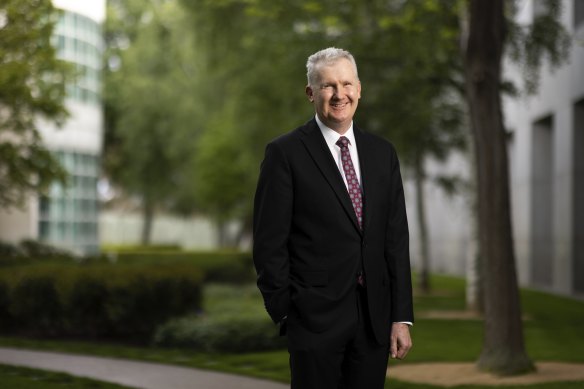 Tony Burke is not known for taking a backward step.Credit:Alex Ellinghausen

In an interview, he says the government is more than willing to spend its political capital to steer through the laws.

Asked about the risk of losing some of the goodwill Labor has enjoyed since its election victory in May, he says: “A determination to get wages moving isn’t risking goodwill, it’s a condition of it.”

He isn’t surprised by business opposition but says he feels the pressure to deliver on Labor’s campaign promise to lift wages: “No matter which way this lands, we need to make sure that people’s wages get moving.”

Burke is not known for taking a backward step, be it endorsing multi-party bargaining on ABC TV’s 7.30 program, goading business critics as “a two-bit peak body” or treating opposition questions with full-throated contempt during question time. A polarising figure who doesn’t mind a little blowback, Burke is talked about – in hope and dread – as a future leader of the party if he plays his cards right.

After a fiery day on the floor of the House of Representatives, he sometimes retreats to the ministerial office once occupied by Albanese, where he keeps three guitars, a keyboard and a record player.

“If it’s a day of fire there’ll be some Nirvana coming on the guitar. If there’s about to be some fun in question time, I’ll sit at the piano and play Come On Eileen.” 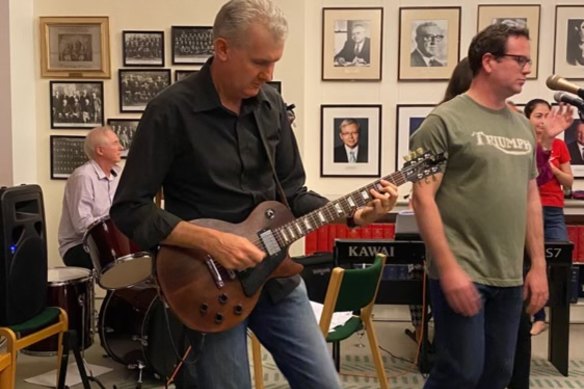 Tony Burke on guitar and Veterans’ Affairs Minister Matt Keogh singing in the Labor Party caucus room in the band Left Right Out.

Having served just 18 months in the NSW upper house, he moved to Canberra in 2004 and has never been absent from the front bench.

He was a key player in the Labor leadership switch from Kevin Rudd to Julia Gillard in 2010 and a subsequent member of the praetorian guard that backed Australia’s first female prime minister almost to the end.

As manager of opposition business under Bill Shorten (and later Albanese), Burke used his debating skills to lead the attacks that ultimately removed Bronwyn Bishop from her job as Speaker – though he too ended up under fire over flights he charged the taxpayer to bring his kids to join him at Uluru.

The flights were within the rules but not, as Burke said, in line with community expectations and, as a former staffer notes, “that was the closest he has come to a near-death experience in politics”.

A staunch Catholic who led the “No” campaign against euthanasia in NSW in the mid-’90s, he voted against same-sex marriage in 2012 before switching sides – after communicating his views to his strongly anti-gay marriage electorate – in 2015. Along the way, he and first wife Cathy Bresnan split in 2012, only going public about it in 2014.

He has since married Skye Laris, who was his chief of staff until March 2011. Laris – an experienced staffer, lobbyist and campaigner – serves in a senior role in Albanese’s office.

After 25 years in public life and close to 20 years in parliament, Burke has matured from a young minister who hosted after-work drinks and had a mirror ball in his office to someone who quit drinking when parliament was sitting once he became manager of opposition business.

“My view was just I was the point person in the parliament. At any moment, I could have to deliver a speech on which the side relied, and it wasn’t that I’d ever be intoxicated or anything like that, I just needed to always be at my sharpest,” he explains.

The disco ball has been replaced by the band he now leads – Left Right Out, a collection of caucus members and staffers who jam in a caucus anteroom.

As far as outlets go, it’s a healthy one – as one member notes, it’s better than heading down to Kingston Hotel for a beer.

“I’ve always loved music, and a whole lot of people in here get into the gymnasium and different sporting activities. I tried the gym a few times when I first got here, and there was too much ego around it,” Burke says.

“I think you need the window into a world that is away from the world of non-fiction. I think you do your job better that way.”

Colleagues relate that Burke was gutted when Shorten gave the arts portfolio to Mark Dreyfus when Labor moved into opposition in 2013, but now he’s arts minister again.

High arts and the bruising rounds of the IR portfolio might look like an uneasy mix, but for Burke the arts not only help define Australia but teach people to set standards without settling for less.

“There’s a great story that Paul [Keating] tells of having a group of cabinet ministers around to his home when he was at Red Hill [a Canberra suburb] when he was treasurer – John Button, John Dawkins, his tight group,” Burke says.

“And one time he played to them Mahler’s Symphony No.2, the Resurrection Symphony, played it through, and they were thinking, ‘What’s he doing?’. He makes them all be quiet. And at the end, he says to them, ‘Well, what does it mean?’.

‘If it’s a day of fire there’ll be some Nirvana coming on the guitar. If there’s about to be some fun in question time, I’ll sit at the piano and play Come On Eileen.’

“And they’re all sort of, ‘What are you on about?’, and Paul says, ‘It means we have to do better. You can’t hear work that’s perfect and walk off and say how do we find a compromise?’. And that’s where I think the arts – not just in national identity but in policy ambition – give you a sense that it is possible to nail things and get them right.”

In many ways, Burke is a politician in the Keating mould, mixing the highbrow and the hardline.

And the scope of his ambition – like Keating’s – is clear to see. Ambition is a word that comes up time and again when discussing Burke, and it’s part of what makes him less than universally loved among his colleagues. His desire to be prime minister one day – after Albanese leaves the stage – keeps coming up.

“He’s the most ambitious bloke I’ve ever met – and I know Bill Shorten,” says one NSW Labor colleague who asked not to be named so he could speak freely. “Everything he does, he has one eye on becoming PM. It’s all calculated and thought through, like this IR bill. It’s designed to win favour with unions.”

A former NSW Right powerbroker, who also asked to speak anonymously, offers that “everyone is ambitious in that place [parliament]. Tony just doesn’t hide it.”

“We have a lot of people who could be PM and he is one of them, but he’s a very loyal soul to his great friend Albo. They have a shared love of music and similar multi-faith constituencies, too,” Sheldon says.

“They connect on multiple levels, they represent similar constituencies, they have a real passion for those who are disempowered. And Burkey’s desire for a better country surpasses his ambition for himself.”

So, does Burke want to be Labor’s bandleader in federal parliament one day?

“I rang him from my party – he said I was the first to call. Once he said he was running, I couldn’t have been happier. This building often lacks self-awareness. But if you care about the cause, if you think someone is better than you to do a job, then you want them to do the job. And he’s better.”

Burke hasn’t quite answered the question.

“If I thought I was the best person, I would put myself forward.”

At that notional point in the future, if Albanese were no longer prime minister?

“Yes, if I thought I was the best person, I would put myself forward.”

But he adds: “If I come and go from this place and it never happens and it’s because someone like Anthony has been there: win.”