The Committee for Melbourne says the COVID-19 health crisis has been poorly managed in Victoria and issued a call to arms to protect Melbourne's position as "one of the world's great global cities".

The organisation, which brings together 150 members from business, academic and community circles, is urging the state's political, business and cultural leaders to emulate the response to the state’s last recession 30 years ago. 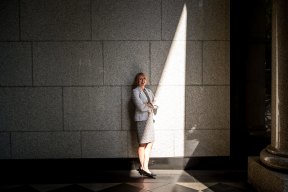 In the early 1990s, an unlikely coalition of political, union and business figures came together to plan Melbourne and Victoria’s recovery from recession.

The collaborative approach led to the formation of the Committee for Melbourne, which drove recession-busting reforms including the redevelopment of Docklands and the introduction of Sunday trading.

Committee for Melbourne chief executive Martine Letts said the state was in dire need of a similarly collaborative approach to restore the city's fortunes and reputation.

"Not since the economic downturn of the 1980s has Melbourne’s position as one of the world’s great global cities been so profoundly challenged," she said.

Committee for Melbourne members were "concerned and frustrated" with the situation in Melbourne, she said, "where fear is being cultivated rather than challenged".

"Other cities are trying to poach our research, engineering and technical talent, and working hard to attract job-creating investments that in the past would have come our way. We need to turn this
situation around."

Ms Letts said the Andrews government and bureaucracy should balance the effective management of the health crisis with a plan to reopen the economy.

"This is not an either-or choice – we need a both-and approach," she said.

For the past six months, the committee has been running "road to recovery" working groups of its members and liaising with government agencies and industry.

From those workshops have come a number of ideas to generate economic activity and restore confidence in the city and state, by getting Melburnians back to work safely and generating jobs and investment in Melbourne.

The Committee for Melbourne will report its recommendations to Victorian Governor Linda Dessau next month.

A spokeswoman for Premier Daniel Andrews said: "We understand that everyone is making huge sacrifices, but this strategy is working, and we are driving cases down."

"Seven weeks ago, our average case numbers were peaking at more than 400 every single day – today it sits at just over 20."

"The roadmaps for metropolitan Melbourne and regional Victoria outline the safe and steady steps to make sure Victoria can open and stay open."