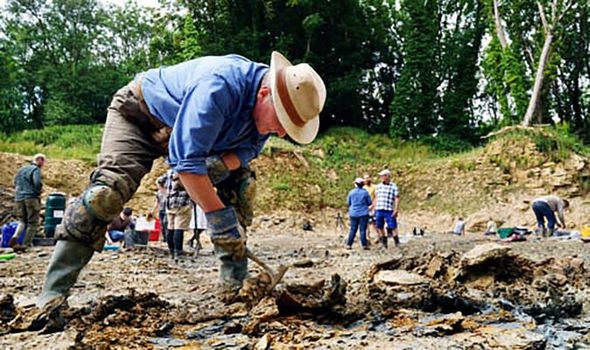 Neville and Sally Hollingworth used Google Earth to zero in on a Wiltshire quarry ‑ and found a graveyard of hundreds of intact creatures including starfish and sea lilies. Sally said: “They are 167 million years old, these little critters, and the preservation is just amazing.”

Dr Hollingworth, of Swindon, said after asking the quarry manager for permission, they found its clay floor was littered with “lots and lots of little fossils which we call crinoids or feather stars”.

He added that evidence from a dig organised by the Natural History Museum showed the creatures met a sudden end.

He said: “They were probably buried alive by mudflow, some sort of submarine landslide.

“All we’ve got is a snapshot, like a window back in time to what we call the Jurassic Pompeii ‑ that’s what I’m describing it as because all the animals died where they lived.”

Thousands of people were killed on the spot when the Roman city of Pompeii was overwhelmed by the eruption of Mount Vesuvius in 79AD, with their bodies covered for centuries in volcanic ash.

Dr Tim Ewin, a senior curator in Earth sciences at the museum, said he was amazed at the large number of fossils found at the Wiltshire, site from the Middle Jurassic period ‑ 174 to 164 million years ago.

He added: “We’ve got so much that we’re sort of having to contemplate leaving behind really nice material. It’s really an exceptional site.”

Researchers believe the Hollingworths may have found three new species: a feather star, a brittle star and a sea cucumber.

The specimens will let scientists learn about the evolution of the animals as both juvenile and adult samples were located ‑ even a starfish with an arm being regenerated.

Dr Hollingworth, an honorary research associate at the University of Birmingham’s school of geography, Earth and environmental science, said the find was even more exciting than his 2004 unearthing of the skull of a prehistoric relative of the elephant, saying the latest fossils are “unique”.

He said: “From that perspective this is a mammoth find”.