Economists are warning the federal government against picking winners as it pledges to spend at least $20 billion of taxpayer funds on a shortlist of nascent lower-emissions technologies including clean hydrogen, green steel and carbon capture and storage as it targets net zero by 2050.

Prime Minister Scott Morrison and Energy and Emissions Reduction Minister Angus Taylor said on Tuesday their plan to decarbonise the economy would have at its heart a technology investment “road map”, which it forecasts will contribute 40 per cent of emissions cuts needed to get Australia to net zero. 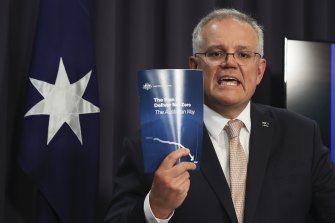 The government expects to generate between $60 billion and $100 billion in private spending from its $20 billion technology investment, and has flagged it could commit billions more in future budgets.

However, significant questions surround the ability of the shortlisted technologies to be cost-competitive at scale. The government’s policy released on Tuesday sets out “stretch goals” to benchmark how much cheaper zero-emissions fuels such as clean hydrogen must become before they are cost-competitive with existing fuel sources for vehicles, power generation and a range of industrial processes.

“One of the safest assumptions that you can make is the rapid introduction of technology will continue to drive these costs down”, Mr Morrison said. Technology had “revolutionised the economy globally” and further advances were a “given”, he said.

“It’s not all about technology,” he said. “Technology is part of the answer but really if you don’t change the price of carbon-intensive products relative to other products, it’s going to be very expensive to hit an emissions target.”

Economist and Climate Councillor Nicki Hutley said “chasing the unicorn of carbon capture and storage” would see taxes wasted and government must “be very careful when investing in technologies”.

“We know picking winners is bad policy,” Ms Hutley said. “Any economist worth their salt says the way to go is to be technology-neutral. Impose a carbon price and let the market work out what’s most economically efficient,” Ms Hutley said.

“Our plan continues the policies and initiatives that we have already put in place and that have proven to be successful, while preserving existing industries and jobs, and supporting regional Australia,” Mr Taylor said.

“It will not shut down coal or gas production, or require displacement of productive agricultural land.”

The government selected technologies based on their comparative advantage for Australia, targeted at domestic economic opportunities, and potential to deliver significant emissions reductions in emerging opportunities rather than speculative initiatives.

Labor leader Anthony Albanese accused the government of failing to provide details on how net zero would be achieved.

Australia’s emissions have already fallen 20 per cent largely due to bans on land clearing, and the remaining 50 per cent required to hit net zero are expected to come from carbon offsets like tree planting (10 to 20 per cent), declining market demand for carbon-intensive products (15 per cent) and future unforeseen technology breakthroughs (15 per cent).

Emma Herd, Ernst & Young’s climate change and sustainability partner said lowering the cost of technologies was only part of the solution and the road map did not show how Australia’s selected technologies would compete internationally. For example, large-scale batteries and hydrogen will compete as an energy storage technology.

“It’s a highly competitive global landscape and other countries are putting in place policies to push through change” Ms Herd said, such as imposing a price on pollution and setting emissions caps on industries.

Get daily updates on the climate summit that will shape our future. Sign up to our COP26 newsletter here.