COIN hunters are being warned to watch out for scammers selling fake Kew Gardens 50ps on eBay.

This 50p has caught the eyes of crooks after regularly topping lists of the rarest coins in circulation. 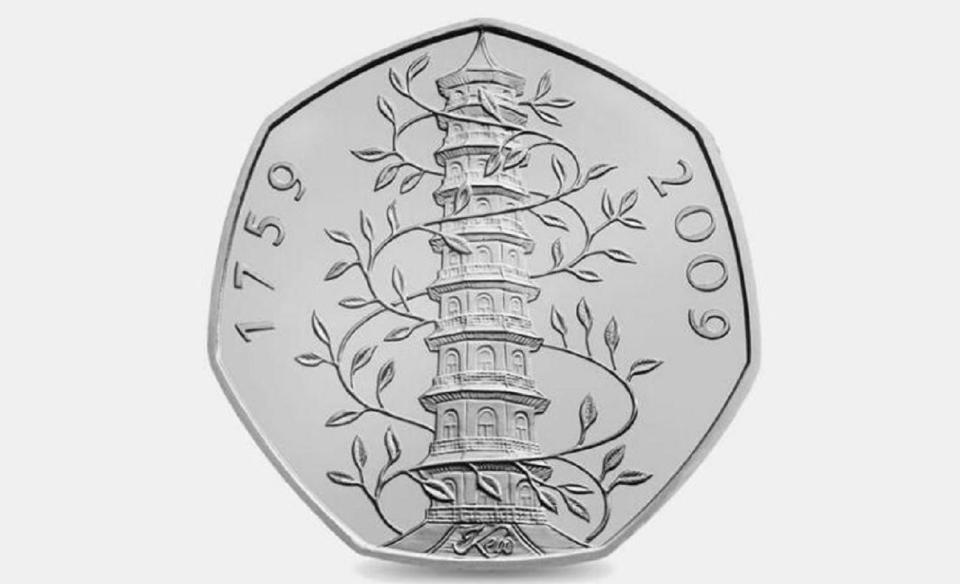 Collectors pay up to £400 for genuine Kew Gardens 50ps on eBay – 800 times its face value – and there are often hundreds of them listed.

This means it can be a costly error if you end up bidding on one that isn’t real.

Speaking to The Sun, coin expert Jon White of the Britannia Coin Company explained how many replica Kew Gardens 50ps find themselves on auction sites.

Crooks first purchase these fake coins from Chinese websites, with The Sun spotting some for sale from as little as 68 cents each (48p).

FIRST of all, check our guide below with detailed images to see if you can spot any tell-tale signs that show a Kew Gardens 50p could be fake.

There are also other ways you can check if what you're bidding on is genuine.

We spoke to Colin Bellamy from the Coin Hunter website to get his top tips:

The coins are listed as replicas on these webpages – but the sellers will market them as genuine when they later put them on eBay.

Mr White said: “Fakes and copies have always been a big issue.

“Most fakes can be easily identified with a keen eye, providing the viewer has knowledge of what they're looking for.

“Unfortunately, casual buyers and novice collectors are the ones most likely to be caught out.”

The Kew Gardens coin was released in 2009 and features a pagoda from the famous botanical gardens in south west London.

According to the Royal mint, there are only 210,000 of them minted and in circulation.

That's far fewer than most coins – there are more than one million of the next rarest 50p, which is the Olympic Football 50p from 2012.

According to experts at change checking website Coin Hunter, the Kew Gardens 50p sells for £156 on average on eBay.

The dangers of selling your coins on eBay

THE most valuable coins are usually those that have low mintage numbers or those with an error.

These are often deemed the most valuable by collectors.

Once you’ve found out whether the coin is real or not, you have a number of options – either selling it through a coin dealer, at auction or on eBay.

Sell it at auction

If you’ve got a coin that you would like to sell at auction then you can contact a member of the British Numismatic Trade Association.

They usually deal in very old coins but they may be able to help you assess whether it’s worth selling your coin at auction or whether it would be valuable to a collector.

Sell it on eBay

If you want to sell the coin you’ve found in your spare change on eBay then you need to know the risks.

Remember to set a minimum price that is higher or at the very least equal to the face value of the coin.

Even if your coin “sells” on eBay for a high price there’s no guarantee that the buyer will cough up.

In its terms and conditions, the auction website states that bidders enter a “legally binding contract to purchase an item”, but there’s no way to enforce this rule in reality.

The most eBay can do is add a note to the buyer's account about the unpaid item or remove their ability to bid and buy.

This is because in order to sign up to the website, users do not need to put in valid bank or PayPal details before making a bid.

If a bidder refuses to pay, then the only option for sellers is to give “second chance offers” to other bidders or relist the item.

For items of a high value, eBay recommends that sellers put a limit on their listing to approve bidders.

It means bidders must email you before placing a bid but NOT that they must pay out the cash if they win.

How do you spot fake Kew Gardens 50ps?

There are many different ways to spot a fake Kew Gardens 50p.

Coin website The Fake Pound Coin Database has listed several examples to show you what you should be aware of.

These are just some of the known fakes, and it is likely that there are many more out there. 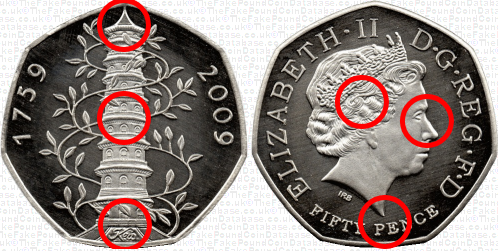 In this example, the bottom of the Queen’s neck is pointing to the E instead of the P in “pence”.

Experts say there is also a lack of detail in her eyes, and too much excessive engraving in her hair.

You should also be aware of an excessively pointy top of the pagoda tower, as well as a frosted or very high relief design.

Some fakes have lines either side of the word “Kew” at the bottom of the 50p, although this is also sometimes seen on Brilliant Uncirculated or Proof coins. 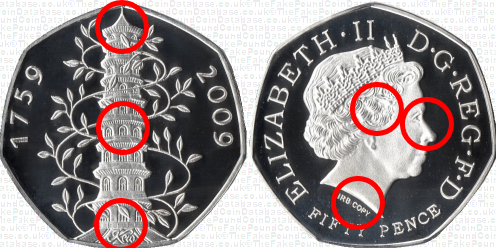 On this coin, you can see the word “copy” next to IRB underneath the Queen’s neck.

The Queen's eyes are also not detailed, like the first example, and her hair has too much engraving once again.

As with the first example, the tower also has a pointy top and frosted design. 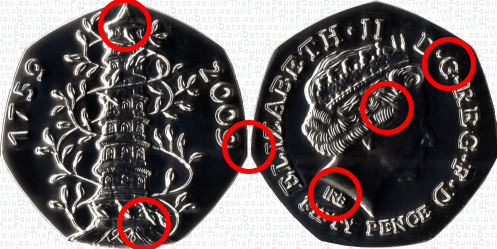 In this example, there is no edge or rim around the outside of this coin, and the letters are extra large.

Experts have also pointed out extra detailing on the Queen’s hair that you wouldn't ssee in genuine versions. 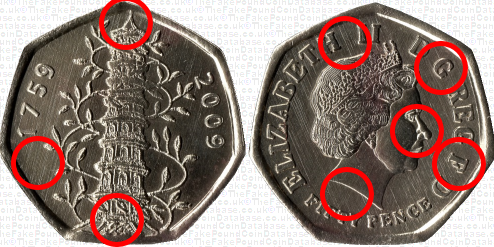 The detailing on this Pagoda tower on this coin is more grainy and less sharp than they should be.

There is also no IRB detailing or dots between letters on the reverse.

If you think you've found a fake coin listed on eBay, you can report it for free to the auction site, so it can then investigate.

As part of its rules, eBay says it doesn't allow replica coins or counterfeit currency to be sold on its platform.

eBay goes on to say it will remove listings if it receives complaints of an item not being authentic.

Sellers also face having their accounts suspended, and any fees paid to list their items won't be refunded.

Only one-sided replica paper currency can be listed if the size is less than 75% or greater than 150% of the genuine currency and the listing includes the word "replica".

For more rare coins, we've rounded up the most sought-after 10p coins in circulation including an alphabet coin worth up to 175 times its face value.

These are the most valuable 50p coins to look out for.

And here are the rarest £2 coins in circulation – from Mary Rose to the Commonwealth Games.