Elite sportspeople and their families are being granted special exemptions to travel into Australia while thousands of citizens remain stranded, sparking claims of unfair treatment for the rich and famous.

Cricketers returning home to Australia this week after fleeing India’s spiralling coronavirus crisis will be allowed into NSW over and above the usual caps on hotel quarantine.

And new information from the Department of Home Affairs reveals the Australian Border Force (ABF) granted travel exemptions to all family members of tennis players competing in the Australian Open who asked for one. 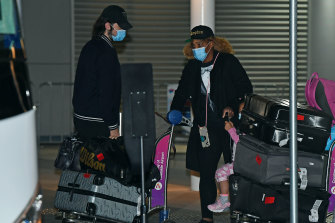 Serena Williams and her family arrive in Adelaide ahead of the Australian Open. Tennis Australia ran its own quarantine system for players and staff.Credit:Getty

The guidelines on travel exemptions, which state that ABF Commissioner Michael Outram will personally consider matters involving relatives of elite sporting teams, say accompanying family members should generally only be approved if they intend to stay in Australia for at least a year.

There are 34,000 Australians overseas registered with the Department of Foreign Affairs and Trade as wanting to come home, including more than 9500 in India.

The ABF granted eight travel exemptions for the Australian Open and refused none, the department said. It didn’t name the travellers, but they likely included Serena Williams’ husband, Alexis Ohanian, who attracted attention in the stands, and their three-year-old daughter.

Tennis Australia set up its own quarantine system to allow more than 1200 players and staff to enter the country ahead of the February tournament – to the annoyance of some players who didn’t want to spend the fortnight stuck in a hotel room. The organisation said only 10 had tested positive for coronavirus.

A Tennis Australia spokeswoman said this week the program was fully funded by the sporting body and didn’t affect any returning Australians.

“Everyone taking part was granted an exemption to enter the country within the guidelines, and based on the economic benefit that they brought to Australia,” she said.

But Greens senator Nick McKim said it was “galling” to Australian citizens and residents who had their own travel exemptions knocked back to see what appeared to be special treatment.

“I’m aware of hundreds of temporary visa holders who repeatedly applied [to come in] under the compassionate grounds that are provided for in the commissioner’s guidelines and been rejected dozens of times in some cases,” he said.

“There’s some cases where parents have never seen one of their children because they were born overseas and can’t get back in.”

Australian cricketers who were playing or coaching in the Indian Premier League are expected to return from India this week to stay in special hotel quarantine in Sydney.

Prime Minister Scott Morrison said on Sunday the cricketers hadn’t been given any special dispensation because they wouldn’t be taking up spots in the capped hotel quarantine system.

“That is something we insisted upon and they were happy to agree with that,” he said.

“They will come back under their own steam, on their own ticket, and they won’t be taking the spot in quarantine of any other Australian who is returning home under the NSW caps.”

The first repatriation flight for vulnerable Australians stranded in India arrived on Saturday carrying 80 people rather than its full 150 capacity after dozens of passengers returned positive COVID-19 tests before boarding. Qantas is now reviewing its testing process after questions were raised over the laboratory used.

Get our Coronavirus Update newsletter

Stay across the news you need to know related to the pandemic. Get it every Monday.