We touch base with director Ekwa Msangi on her debut feature being a timely universal account of the Black immigrant experience.

The newest film from director Ekwa Msangi is a striking depiction of the nuanced and complex Black immigrant experience that’s been long overdue to appear on the big screen.

Farewell Amor, Msangi’s debut feature, follows Walter (The Chi‘s Ntare Guma Mbaho Mwine), an Angolan immigrant who reunites with his family in the U.S. after a long 17 years apart. His wife, Esther (Zainab Jah), and Sylvia (Jayme Lawson), his teen daughter are virtual strangers to him as they navigate to reconnect in his small, one-bedroom Brooklyn apartment.

The film shows us three different points of view from each member of the family and how they reckon with the residuals of separation. Walter struggles to let go of a previous relationship he fostered through dance while Esther navigates culture shock and a distant husband. Sylvia is a talented dancer, like her father, and uses the art form to come into her own in a new city. 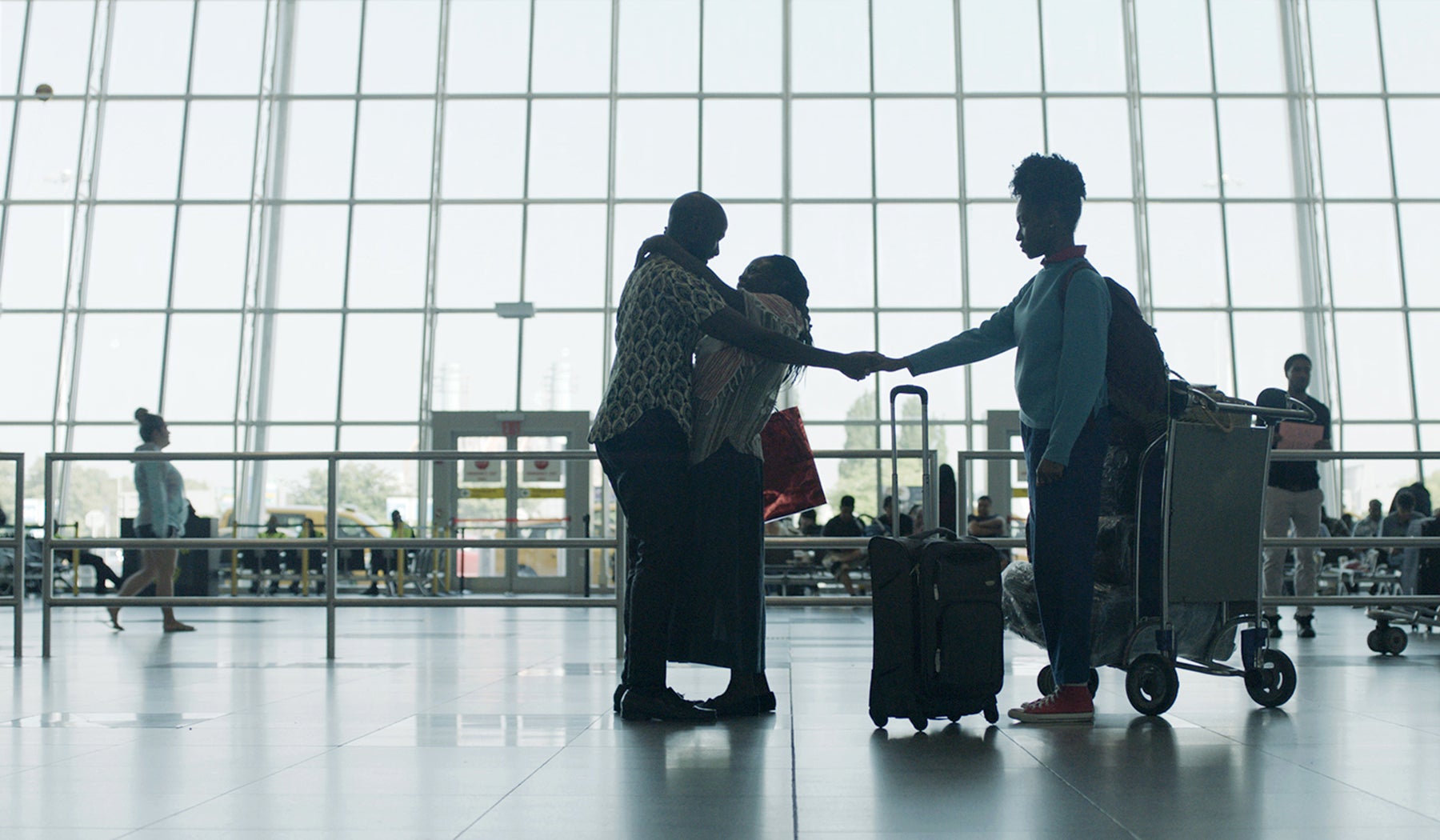 It was important for Msangi to make this film a Brooklyn story, as a nod to her time spent growing as an independent filmmaker in the New York City borough. Gathering the community to experience and be included in the feature was due to the personal relationships herself and her producing partner have cultivated over the years.

Msangi notes that the film wrapped by the time the first pandemic lockdown came around and had been well-received at Sundance at the beginning of the year. She, among many other creators who released film projects this year, were hit with the challenge of finding the right distributor—if it were to get picked up at all. “It certainly was scary because at some point it felt like we may not find a home for this film,” she shares, “And is it fair or right to be even upset about this when people have such bigger problems on their plate, like fighting for their lives? But the fact that we did find a home for our film and a home with somebody that really cares was the main goal for us.”

Farewell Amor pulls from Msangi’s personal experiences with immigration, as she is one herself with Tanzanian roots. She taps into music, food, and dance—three elements displayed poignantly throughout the film—to get viewers to consider what “home” means, and how these elements are used to hold onto memory, hope and faith. 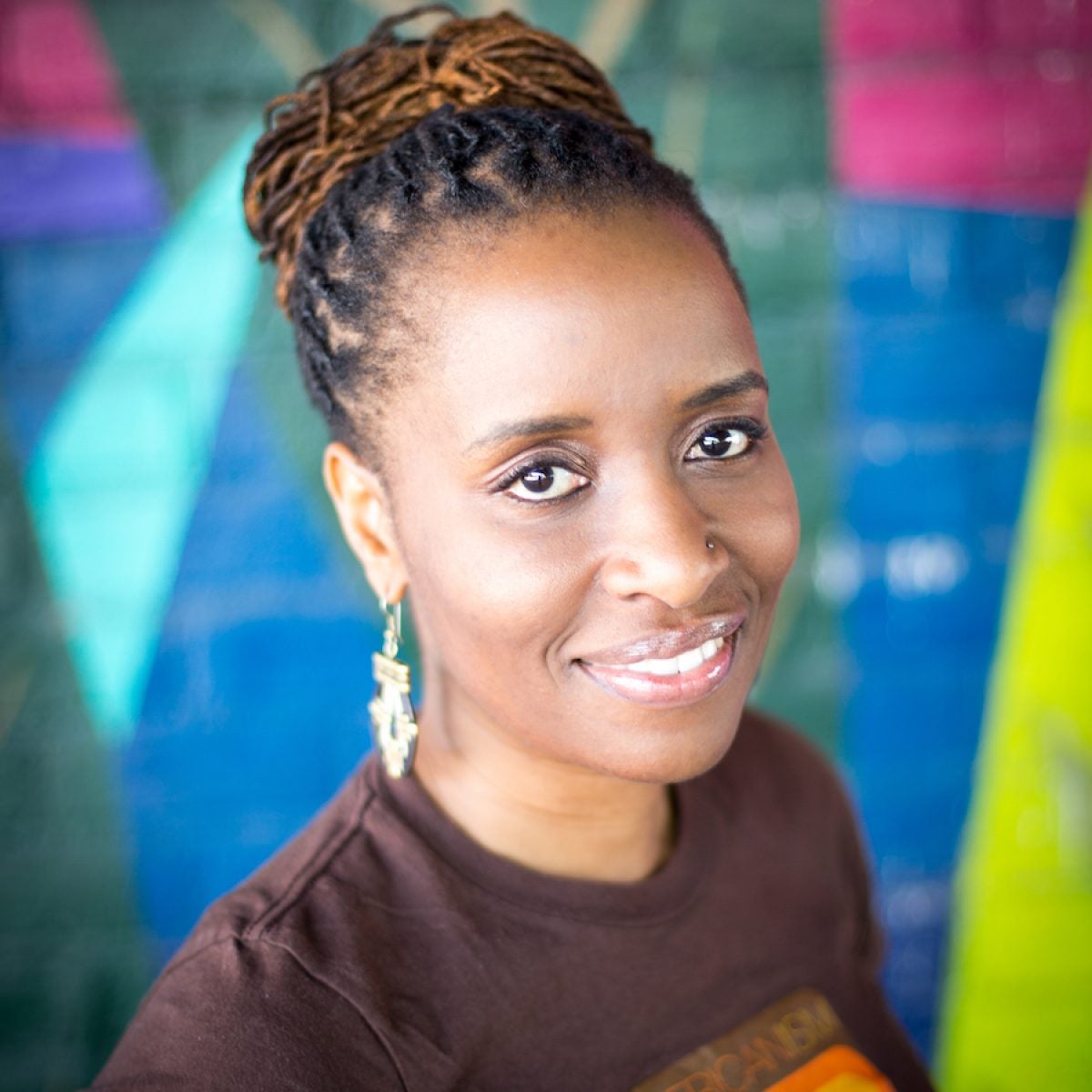 In our conversation with the director, we learn more about the film’s origin story, Msangi’s growth as a filmmaker since producing this project, and more, below.

What moved you to tell this story that many in the African diaspora have experienced or known of since navigating living away from home?

EKWA MSANGI: It’s a story that’s in the family and it’s inspired by an aunt and an uncle who are going through this—they have not been reunited and have been separated for over 20 years. Similarly, nobody loves putting their laundry out, so I made sure to fictionalize the story as much as possible, but I wanted the opportunity to humanize the immigrant experience. And even with the term ‘immigrant’—especially in the past four years, immigrants have gotten such a bad rep due to the outgoing administration and all the horrible things that have been said about immigrants. We rarely get to spend time and reflect on who these people are and the humanity of them. I wanted to put a human face on one aspect—one particular human immigrant story as there are so many.

Because it’s loosely based on your aunt and your uncle, is that why there’s that connection between Tanzania and Angola? If not, are there any other connections those two countries have with each other?

MSANGI: Tanzania hosted a lot of Africans, especially from the southern countries, during their liberation movements. From South Africa to Namibia, Zimbabwe, Malawi, Mozambique, etc., everybody had camps in Tanzania for many years and over several decades because Tanzania made the notion of ‘if we’re not all free, then none of us are free’ reflect through their foreign policy. It would be possible that there would be Angolans who would’ve been in Tanzania seeking refuge during or after their very long civil war.

But I placed some of it in Tanzania for two reasons: to give them an excuse to speak some English, because it wouldn’t make sense for traditionally Portuguese speakers to be more comfortable speaking English to each other, and also because I don’t know [Angolan] culture intimately in a way that I could feel comfortable writing about it, but I am more familiar with Tanzanian culture. So by putting them there, there are certain things that I felt a little more comfortable drawing from.

What I found interesting was your approach to have us experience the same storyline through three different perspectives, especially Sylvia’s. As an African daughter, we’re expected to hold our own in our preconceived roles, stay strong, and hold in our emotions. What was the purpose of using that device for the film?

Not wanting to just focus on Walter’s story of contemplating what he’s going to do with these two loves—we’ve seen that story of a man struggling between a woman he’s committed to and one that he’s made other commitments to. Or a young girl trying to find herself, find her voice, and figuring out how to express herself in this new world. Or a wife trying to find her place in her husband’s home and the home she’s been dreaming about for so long but is it actually the home that she wanted at the end of the day? 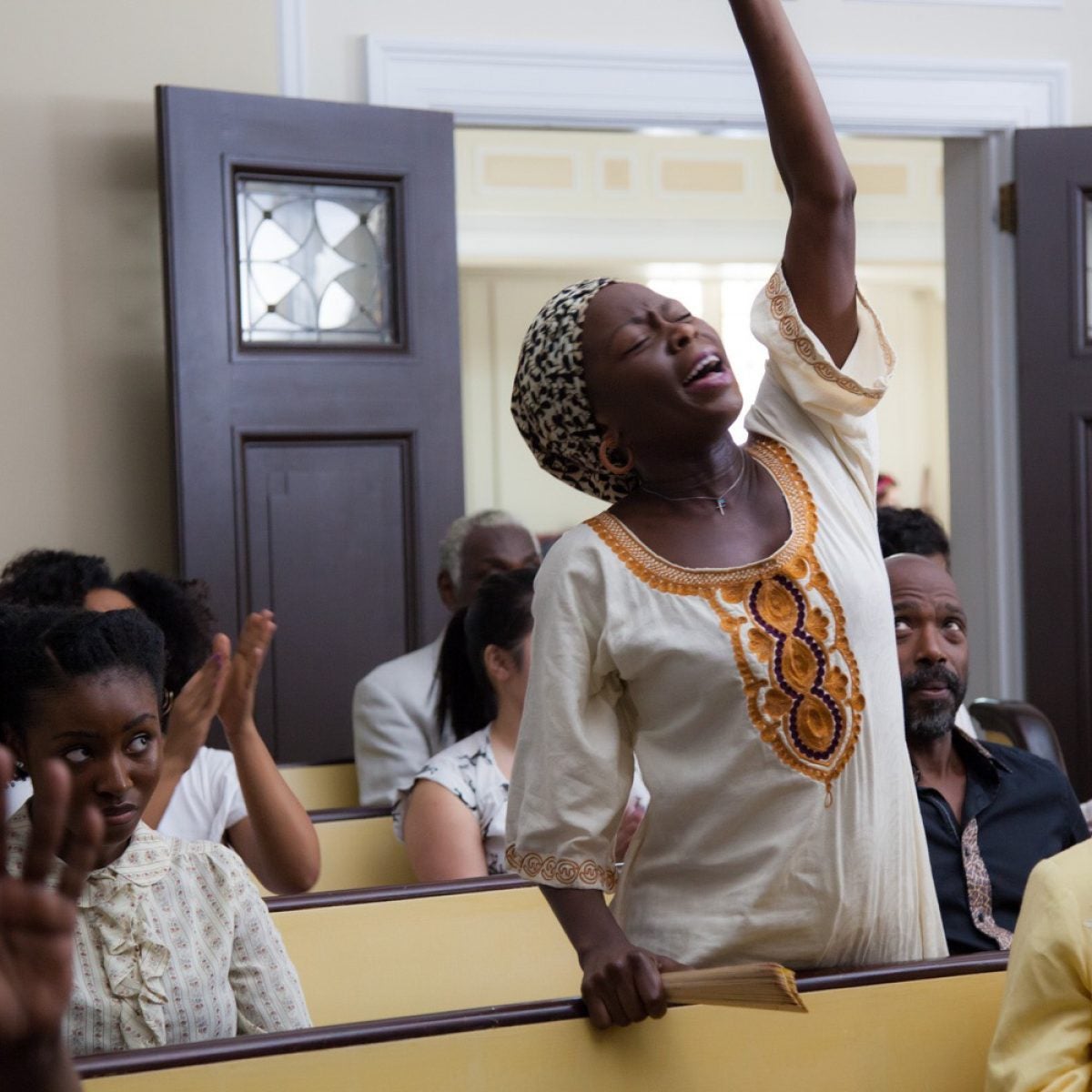 And in looking out for details that help explain that narrative, I noticed these distinctions of where each character was at emotionally through the wardrobe. One thing that stood out to me was the church scene with the mother and daughter wearing white with Walter wearing black. Was that intentional?

MSANGI: It was—I wanted to spotlight him and how foreign he is in this environment because clearly that’s not a thing that he’s been doing much of, even though he possibly has been telling his wife otherwise. We can tell by his posture there that he’s not familiar with this territory. If he was, he’d know not to come to church dressed in black like that, so it was fun to touch on the technical things of drawing your eye in that direction.

Reflecting on your growth as a filmmaker, how were you able to remain secure in using those devices with a feature-length film like this?

MSANGI: It was made very easy with the people I collaborated with. Being a filmmaker, a writer and a director, it starts with a vision or a thing in my head that sometimes you even struggle to explain and nobody really knows what you’re talking about, so you have to show it and get other people to help you to show it. It’s a gratifying, magical experience to be able to do so, and I can’t do that without just having magnificent collaborators who can each bring their own thing, maybe add to it.

For example, I had written the neighbor character Nzingha for a younger woman. But when we were in casting, it just didn’t quite feel right. The casting director suggested I consider somebody older and brought Joie Lee in—she brought so much to that role. Just her presence, even before she said anything, those words off of her body just brought it to a different level. Being able to see that in every single department is such a gift. 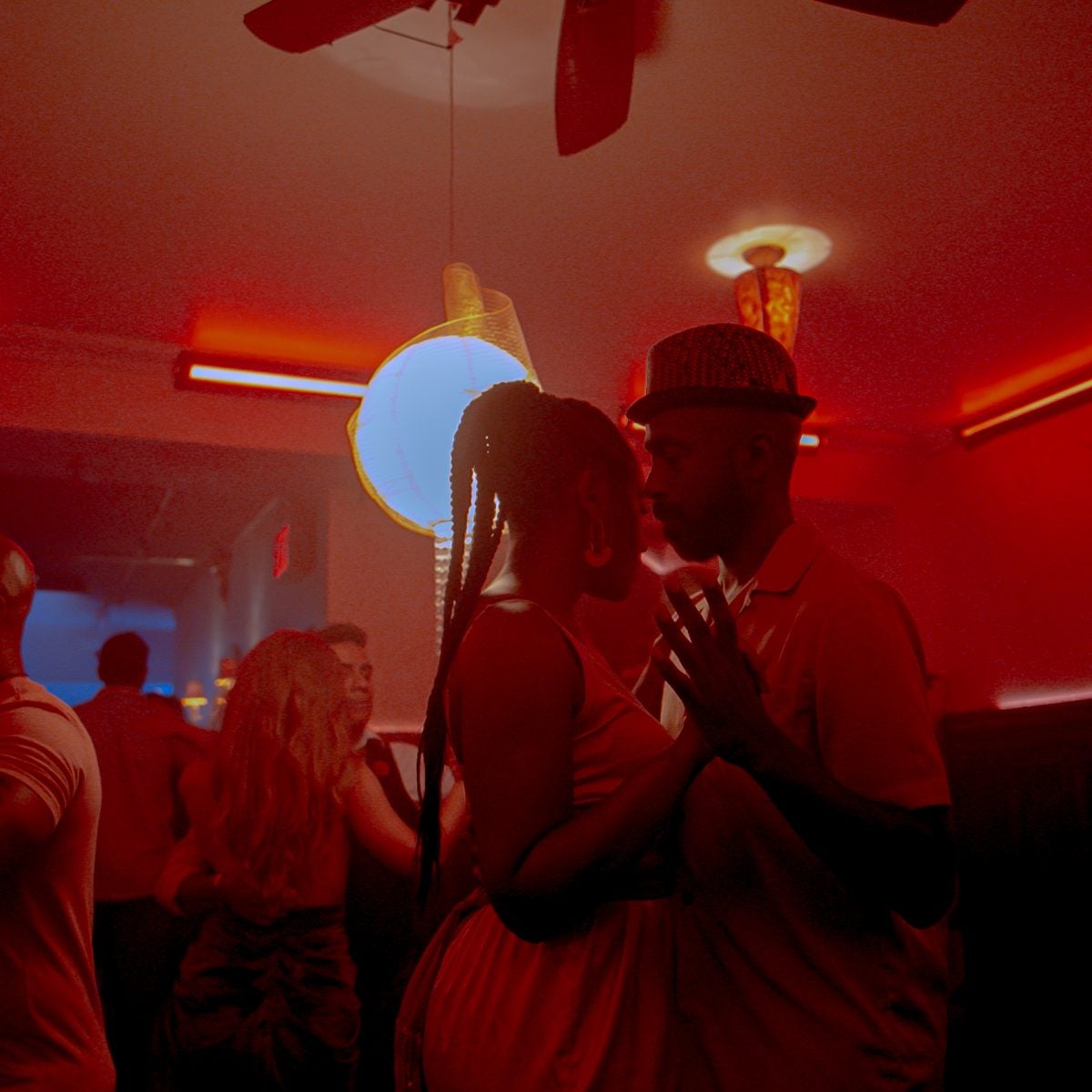 What are some takeaways you’d like viewers to keep in mind while watching the film?

MSANGI: This is the story that has taken many years to make, but we had so much fun making this film. Everyone involved was so joyful and I think it reflects in the work. It’s a story that’s very close to me—there are so many things I’m so proud to be able to showcase. A film about a Black African family reaching for each other and really putting in an effort to be connected. We never get to see films about that—we never get to see film with grown, African adults having consensual sex and a middle-aged African woman in pleasure.

I want viewers to enjoy the music, the dance and the culture of Angola—which is a beautiful country and is not often talked about mostly due to language barrier—but is very important historically. It’s an exciting time to be amongst a cohort of African women film voices that have had their films go forward this year. I’m so grateful I lasted this long to be at this point.