The NSW government has told other states it wants the operating rules of one of the Murray-Darling Basin’s biggest lake systems changed to cut the risks of mass fish kills on the Darling River.

The request to review how much water the Menindee Lakes in the state’s far-western should hold before control transfers back to NSW from the Commonwealth was made to the Basin Officials Committee this week. 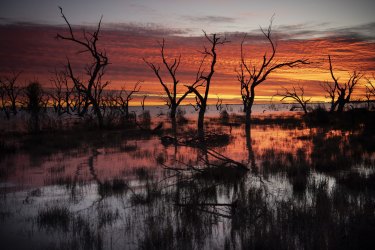 For the first time in a decade, the Menindee Lakes system in far western NSW are likely to fill to capacity. The NSW government wants to alter the regulations so that it can’t be drained as quickly as in the past.Credit:Wolter Peeters

The government wants to alter the way trigger points are set, so as to exclude so-called “dead storage” in the Cawndilla and Menindee lakes from the calculations. NSW now only resumes control when volumes drop below 480 gigalitres, which includes hundreds of gigalitres of water that can’t be accessed.

According to the discussion note to the committee, the move is aimed at addressing concerns of the Lower Darling community, which has argued the lakes were drained too quickly before the last drought, leading to mass fish kills in the 2018-19 summer.

“They question the validity of the existing rules, given the large reduction in inflows to the lakes over the last 20 years and the apparent increased frequency and duration of critically low lake levels,” the note obtained by the Herald states.

NSW Water Minister Melinda Pavey flagged the intention to seek a revision of the Menindee Lakes regulations at a meeting in Wentworth in May, saying NSW would be demanding the 480GL figure excludes “dead storage”.

“If there had been an actual deliverable 480GL, we would have had two years of connectivity flows in the Lower Darling,” Ms Pavey told the Herald. “This would have provided more options to deal with water-quality issues and fish kills.”

“Native fish don’t respect state borders,” she said. “It is not unreasonable to ask other states to help protect this incredibly important ecosystem, just as we are working with other states like South Australia to protect environmental assets like the lower lakes.”

A spokeswoman for the Victorian government said that, under the existing rules, Victoria and NSW share the water equally after capacity reaches a certain level. Flows down the Darling support the Murray.

“This hasn’t happened a lot in recent years – but it’s important to maintain Darling flows to the Murray as much as possible,” she said. 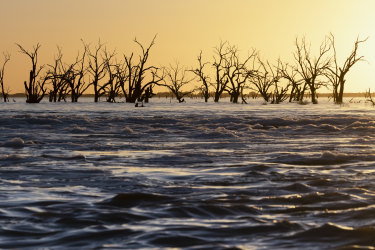 Lake Menindee has more flows headed its way after good rains in the headwaters of the Darling River.Credit:Getty Images

“Without these flows, there is extra pressure on water delivery in the Murray and Goulburn systems – this has environmental impacts on these rivers as well increasing water prices and ramifications for local communities and traditional owners,” the spokeswoman said.

South Australian Water Minister David Speirs said the most effective way to restore the health of the Murray-Darling Basin was through the full implementation of the Basin Plan.

“The Murray-Darling Basin Agreement has stood the test of time and any changes need to be approved by other jurisdictions,” Mr Speirs said. “I simply will not accept any changes which leave South Australia worse off.”

The move comes as the Menindee Lakes are on course to reach capacity for the first time in a decade as more large flows head down the Barwon-Darling network. Already at about two-thirds full, or 1200GL, the system may be full within months, the government said.

”We know how fast things can turn around, so we need to keep the water in the lakes for as long as possible to ensure the environment and communities have more storage in the event that we return to drought,” Ms Pavey said.

Wentworth mayor Susan Nichols supported the change. “Dead water in Lake Cawndilla [totalling] 170GL, Lake Menindee 50GL and Lake Pamamaroo 30GL … is unacceptable when basic human needs of our communities and the health of the Darling River is compromised,” she said. 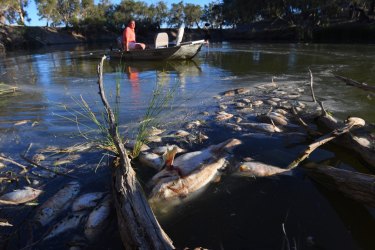 Graeme McCrabb, a local resident inspects some of the potentially millions of dead fish in the Darling River near Menindee in January 2019.Credit:Nick Moir

”If there were more storage in the lakes at the time then maybe the fish kills would not have happened and the drought-devastated communities would not have suffered the economic harm due to less tourist visitation,” she said.

Richard Kingsford, head of UNSW’s Centre for Ecosystem Science said Menindee Lakes had been treated as “the poor environment cousin” for more than 50 years, ignoring the wishes of the local community, including traditional owners.

“Governments hard-wired a decision to use as much of its water to supply the River Murray as possible, meanwhile the NSW and Queensland governments continued to allow its water from the Darling River to be developed upstream,” Professor Kingsford said.

“The Menindee Lakes are a wonderful wetland system capable of supporting tens of thousands of waterbirds, of many species, including migratory shore birds,” he said. “This system could be a tourism hot spot and obviously a healthy Menindee Lakes is also good for local communities.”

Graeme McCrabb, a local wine grower and fisherman, said the move to put the operating rules up for discussion was “a good thing; I’m glad they taken it up”.

The alternative was to risk fish kills of Murray cod and other species year on year “until they wipe them all out”, he said.