But Denise has one condition.

Garcelle Beauvais said she had some intel on Denise Richards wanting to return to “The Real Housewives of Beverly Hills.”

During her appearance on Wednesday’s “Watch What Happens Live,” the actress made the revelation after Andy Cohen asked if she was still in contact with Denise, who quit the reality show last year after two seasons. 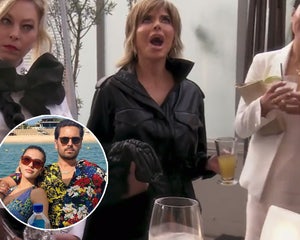 “I am, I am,” Garcelle exclaimed, before adding, “I think she wants to come back.”

Garcelle then proceeded to explain how Denise had one condition on holding a diamond again, saying, “Somebody’s gotta go though.”

After Andy replied, “That doesn’t always work when someone says, ‘If you take this one out, well, I’ll come back,'” Garcelle appeared to agree. He then asked if the “somebody” had the initials “LR,” referring to Lisa Rinna, who had an ugly falling out with Denise last season.

Last September, Denise announced she would not be returning to “RHOBH” for another season after the last one found her squaring off with almost the entire cast. The majority of the drama centered around Brandi Glanville’s claim that she and Denise hooked up, which Denise vehemently denied.

During the season premiere of “The Real,” Denise explained her decision, saying it was a difficult one.

“I’ve been a fan of the show and had a lot of fun doing my first season. Obviously, my second season was very challenging,” she shared. “You know, I went back and forth with it and at the end of the day, I decided it was time for me to move on and focus on other projects that I have. I’m glad that I did it though.”