As the seventh episode of the Channel 4 series saw the contestants bake floating islands, pistachio ice cream and a show-stopping custard gateau, viewers were baffled at why 30-year-old Sandro’s three-tiered creation with three different types of cake and custard didn’t earn him Star Baker.

Taking to Twitter to air their frustration, viewers said Sandro, who has only won Star Baker once despite frequently being top of the table, had been ‘robbed’ of the title, which went to Syabira, and added. 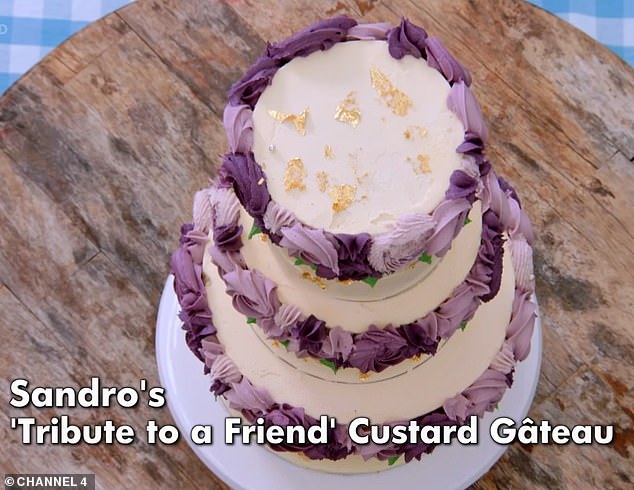 Sandro’s ‘tribute to a friend’ custard gateaux, from episode seven of this series of the Great British Bake Off, was described as a ‘triumph’ by judge Paul Hollywood – but viewers were upset he did not win Star Baker 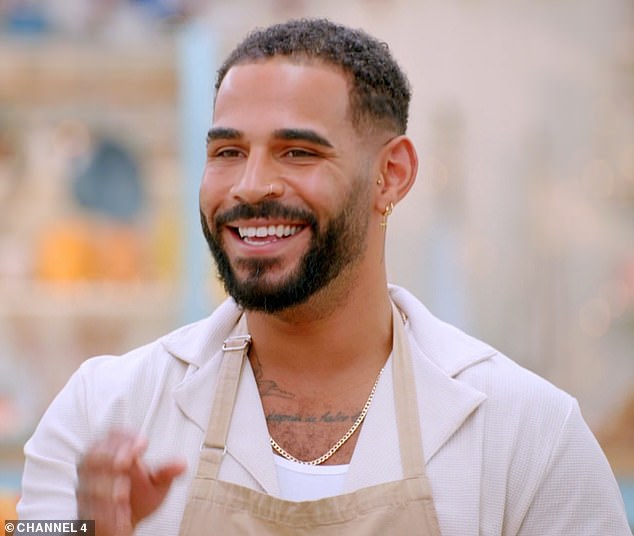 Sandro Farmhouse, 30, from London, revealed his gateau was a tribute to his late friend who had encouraged him to apply for the show

During the episode, Sandro presented the judges with a cherry, chocolate and brandy infused ‘floating island’ – which is a dessert comprised of meringue sat on top of custard.

Although the judges deemed it a little too boozy while Paul Hollywood said it looked ‘busy’, they enjoyed his signature dish.

In the technical challenge, which staggered contestants’ start and finish times for the first time ever, they were tasked with making pistachio ice cream in a waffle cone from scratch, which was to be dipped in chocolate and praline.

Sandro, who was the first baker to begin the challenge, ended up top of the leaderboard for his perfectly-set ice cream, presented neatly with two scoops per cone – as Prue Leith had hoped for. 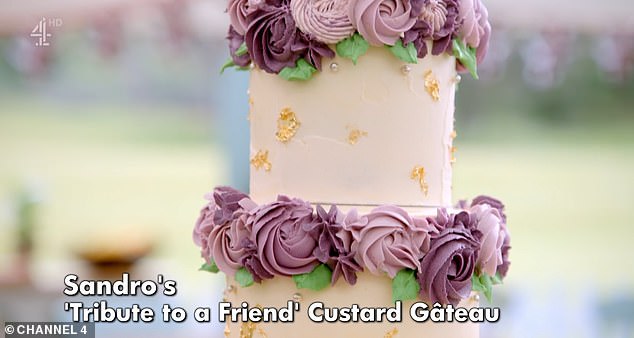 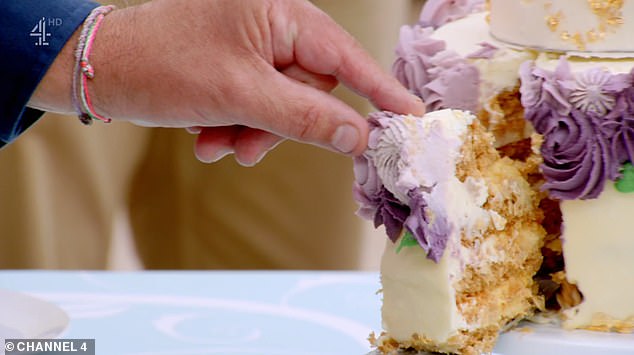 As the judges cut into the cake, Sandro explained the sophisticated combination of flavours including coffee, orange and vanilla

Finally came the episode’s shop-stopper challenge during which the bakers had to present an impressive layered dessert featuring different types of custard, which were intended to be the ‘star’ of the bake.

At the beginning of the challenge, Sandro revealed the three-tiered custard gateau he was building was an ode to a late friend of his, who had always encouraged him to apply to be on the show.

Although he did not reveal much about his friend, he commented during the challenge that he was feeling ’emotional’ as he put together his tribute.

Presenting the gateau, which was smoothly covered with buttercream and iced with piped purple ‘flowers’, to the judges, Sandro explained the complicated flavour combinations he had managed to infuse in the cake.

He said: ‘The bottom tier, the sponge is coconut and you’ve got the mango custard’ before explaining he had filled the second and top tiers with coffee, orange and vanilla flavours. 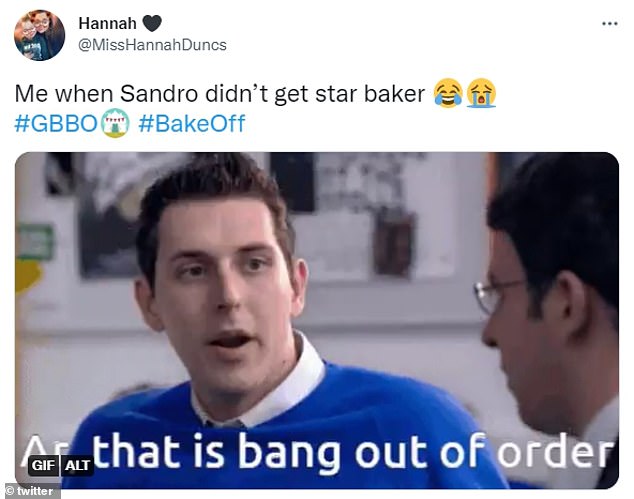 Paul described Sandro’s bottom tier as ‘a triumph’, while Prue said: ‘I love it’.

She added: ‘I think every one of those cakes is highly saleable, absolutely delicious and would be gobbled up by anybody.’

However, Sandro faced a tiny criticism from Paul, who said his coffee custard was ‘glutinous and dry’.

At the end of the episode, viewers were convinced Sandro was in the running for Star Baker, having had another great week in the tent.

However, when presenters Noel Fielding and Matt Lucas announced Syabira had won the title for the second week running, viewers took to Twitter to express their sense of injustice.

One person wrote: ‘Sandro deserved Star Baker this week. They are so unfair, Syabira was just ok.’

Another said: ‘I need Sandro to get Star Baker soon or even a handshake. I’m really sad about it.’

While many viewers were annoyed he did not claim Star Baker this week, they also expressed how they were moved by his custard gateaux as a tribute to his late friend.

‘Bless Sandro – the custard cake tribute to [his] friend is simply beautiful,’ one person said.