Home » Lifestyle » Getting shot, being grumpy: Ray Davies is still ironing out The Kinks

Getting shot, being grumpy: Ray Davies is still ironing out The Kinks

Ray Davies is describing what it feels like to be shot at close range. “It’s just like in the movies,” he says. “He pointed the gun at me and I tried to jump out the way.”

Unfortunately, the Kinks singer wasn’t quick enough. The mugger he chased down a New Orleans street in January 2004 turned and fired, hitting him in the right leg. His vigilantism earned Davies a memorable headline in The Sun – “You Really Shot Me” – and a reprimand from New Orleans police.

Did he feel the pain immediately? “No,” he says with a lopsided grin. “I saw the red dot on my leg first and went ‘oh shit’.” 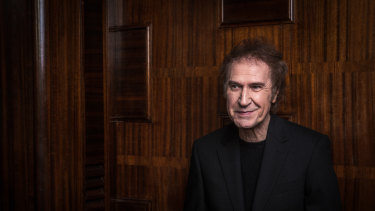 Ray Davies, lead singer of The Kinks, wrote some of the greatest British songs of the 20th century.Credit:Alex Lake

Fleet Street reported the shooting of Davies as a bit of a laugh. In music industry circles, where he is known as a prodigious, but notoriously difficult man, people joked that the list of suspects could be thicker than the New Orleans phone book.

Newspaper reports said Davies was discharged quickly from hospital, but the reality was rather different. The bullet fractured his thighbone and he required a titanium rod to be inserted in his leg. His recuperation was prolonged and painful and he still feels the effects of the gunshot.

“I’ve got sclerosis, a muscular skeletal thing,” he says, quietly. “I’ve had it all my life. I toured America for five years on and off in the 1980s and had to take synthetic morphine. But since I got shot it’s worse.” 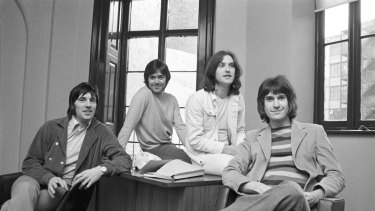 Did the pain affect his mood? Might it be the cause of his, ah, grumpiness?

“Grumpy!” he retorts, feigning indignation. “It never had any impact on my grumpiness.”

Earlier this morning, he reveals, he was given tablets and an injection for the pain. He considered cancelling our interview because the medication makes him feel hot and woozy. Instead, he arrives half an hour late at Lauderdale House, a Tudor mansion on Highgate Hill in north London, not far from where he lives.

His manager brings him a latte that he raises slowly to his lips using both hands. To break the ice I mention the room we’re sitting in is used for weddings. “Funerals,” he mutters not looking up from his coffee.

At 75 he is younger, only just, than Mick Jagger, his evergreen '60s rival. But the man who wrote some of the greatest British songs of the 20th century – a winning streak that began in 1964 with the visceral riff of You Really Got Me, continued with the jaunty pop of Sunny Afternoon and Dedicated Follower of Fashion and reached its apogee with sublimely poetic ballads like Waterloo Sunset and Days – is unlikely to be mistaken for Jumping Jack Flash. His eyes, partially hidden behind a pair of tortoiseshell Ray-Bans, look tired. The remnants of grey hair above his famously broad forehead stand up like porcupine quills. 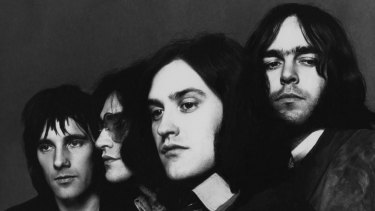 He speaks softly in a gruff London accent and his words often tail off into an indistinct murmur. He has a tendency to ask questions that send the conversation off the rails. “Is email a legal document?” for example, or “who’s the president of Australia?”

The Kinks first toured Australia in 1965. Davies recalls that the band was required to wear its Swinging London uniform of thick red hunting jackets and almost passed out in the sweltering heat.

“I loved Australia,” he murmurs. “We drove from Adelaide to Perth.”

The scenery would have been a little monotonous?

“I like nothingness,” he says with the trace of a smile.

He takes another slow motion sip of coffee. “I knew a girl from St Kilda once.”

“Not officially. A Sheila. Do they still call them that?

“What do they call them then? Prisoner from Cell Block H?” The eyes behind the Ray-Bans twinkle with amusement. 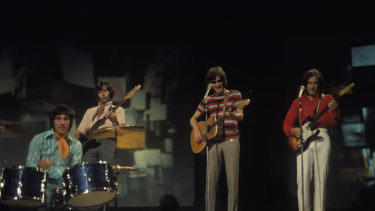 The Kinks performing on TV in 1969. Ray Davies is second from right.Credit:Monitor Picture Library/Photoshot/Getty

Davies is here to discuss Arthur (Or the Decline and Fall of the British Empire), an album the Kinks released in 1969. Its 50th anniversary will be commemorated by a box set that includes a re-mastered version of the original album, some unreleased tracks and songs from an aborted solo album by Dave Davies, the Kinks’ lead guitarist and Ray’s younger brother. 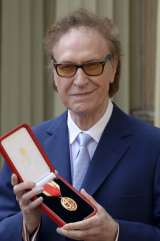 Ray Davies at Buckingham Palace after being knighted in 2017 for his service to the arts.Credit:John Stillwell/AP

Arthur was conceived at a difficult time for the group. Banned from performing in America – a complicated tale that involves backstage fisticuffs with a US union official – their front man turned inwards. For 1968’s The Kinks Are The Village Green Preservation Society he wrote an elegy for the England of his childhood, a land of little shops, china cups and strawberry jam.

Arthur mined a similar vein, but was more ambitious. Conceived as the soundtrack to a TV drama that was never made, it examines Britain’s post-war malaise through the eyes of a suburban carpet layer called Arthur Morgan. Davies based him on his own brother-in-law, Arthur Anning, who emigrated to Australia with Ray’s beloved sister Rose in the early 1960s.

He remembers Anning as a stern man scarred by war, part of a generation he describes as “Lost Brits”. “Arthur served in the Second World War and lost his brother, a fighter pilot,” he says. “Like so many former soldiers he was bitter. I remember my maths teacher at school saying, ‘I’m still wearing my demob suit – it’s all I ever got out of this country’.”

For Ray, still then mourning the death of his sister Rene, who died of a heart attack in 1957, Rose’s departure was a bitter blow. He admits pleading with her to return to London whenever the Kinks visited Australia. Evidence of his feelings can be found in Rosy Won’t You Please Come Home, a plaintive Kinks song from 1966.

Both Village Green and Arthur earned positive reviews, but sold poorly. Rolling Stone proclaimed Arthur “the best British album of 1969”, but the absence of a hit (a situation not rectified until the phenomenal success of the single Lola in June 1970) and a lack of demand for LPs about the loss of empire, sealed its fate.

Davies is unrepentant, defiant even. “Arthur wasn’t a singles album, nor was Village Green,” he says evenly. “And they didn’t sell as well as an album with a bunch of singles on it. But I saw the future and lots of other bands eventually did their version of what I was doing. People called it [Arthur] a concept album, but it was more of a rock documentary based on reality.” 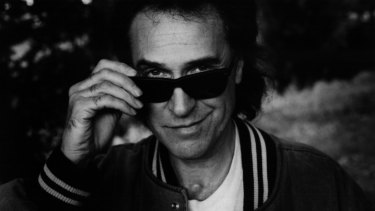 Ray Davies says he has fond memories of Australia. “I knew a girl from St Kilda once.”Credit:Fairfax

Why did he write two albums he knew would sell badly? “I’m stubborn aren’t I?” he chuckles. “It was because we were banned from America and we thought we’d never tour there again. And because I gave up art school to become a songwriter and I wanted to write about my own neighbourhood.”

Arthur also represents unfinished business, apparently. An envelope on the table in front of him contains the script of a new version of Arthur he has co-written with the playwright Paul Sirett. It will be broadcast on BBC Radio 4 on November 2. “You might get a kick out it,” he says tapping the envelope. “It’s the play that should have been.”

Davies clearly wants to talk about something else. “You’re not going to brag about Steve Smith are you?” he says referring to the Australian batsman’s stunning form in the recent Ashes Test.

I wasn’t planning to, I say.

He shakes his head. “The most awesome batting I’ve ever seen.”

He’s a cricket fan, then? “I used to play. I love it.” Suddenly he looks happier. “One of my best days was going to the MCC and seeing the Chappell brothers play. They had a party in my hotel that night and I became the only rock star ever to complain about cricketers making too much noise. I had to be up for a flight in the morning and they were getting pissed at the end of the corridor. Mike Brearley was the England captain and I gave him a right telling off.”

He pauses. “He’s a psychoanalyst now.”

The belated release of his brother’s solo album seems like an opportunity to ask him about his fractious relationship with Dave. Compared to the Davies brothers, feuding rock siblings like Oasis’ Noel and Liam Gallagher look like pretenders.

Age may have wearied them – Dave had a massive stroke the same year his brother was shot in New Orleans – but the question of who came up with the distorted guitar sound on You Really Got Me is still likely to trigger an outbreak of hostilities, either in the press or mano a mano.

“He’s all right,” says Davies when his brother’s name is raised. “He’s a more spiritual man that people give him credit for. A lot of those guitar heroes are like that. [Led Zeppelin’s] Jimmy Page is a bit like that … I’m not sure about Eric [Clapton]. Look, I love the old bastard, but he annoys the hell out of me.”

Has he still got a few great songs in him? “Yeah,” he says without hesitation, “about four or five”.

Look, what I do is more than writing songs for a living or going on stage – the creative process makes me feel better as a person.

“Look, what I do is more than writing songs for a living or going on stage – the creative process makes me feel better as a person,” he says. “If I write something I feel I touch something inside me that wasn’t there when I got up in the morning.”

Is he writing at the moment? “Yeah, it’s a musical about singing siblings.”

Are there a lot of fights in it?

The twinkling eyes behind the Ray-Bans suggest he’s joking. But even at close range it’s hard to be sure.

The 50th anniversary edition of Arthur (Or the Decline and Fall of the British Empire)  is released on October 25.