Girlfriend buys a wedding dress… but she isn't engaged

A girlfriend has been mocked for buying a lacy white wedding dress before she’s engaged, with many saying it’s a major ‘red flag’ for her partner.

The anonymous woman, who posted a photo of herself in the glittering gown on social media, said she was ‘excited’ to have found ‘The One’ so quickly.

‘I got my wedding dress today. I’m technically not engaged yet but I have a promise ring so I wanted to get ahead and start the process,’ she said.

‘I wanted to share my joy with you lovely ladies.’ 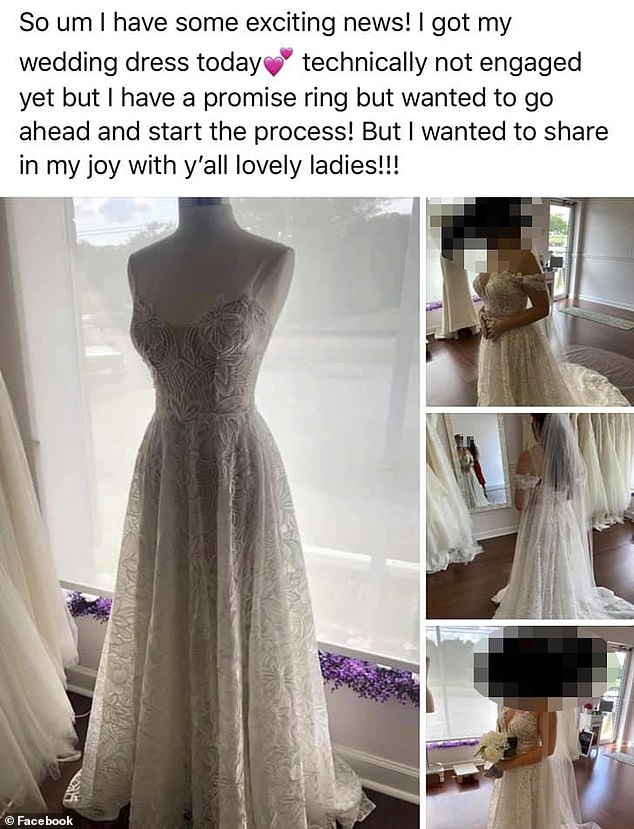 The woman, who posted a photo of herself in the glittering gown on social media, said she was ‘excited’ to have found ‘The One’ so quickly

But sadly people weren’t so on board with her ‘joy’ and quickly called her out on the ‘desperate’ behaviour.

‘Beautiful dress but that is a bats*** crazy bird,’ one person said.

‘The dress is beautiful but you probably shouldn’t get ahead of yourself. Unless they have a “we will be engaged when I save this much money” or some agreement like that. Could be sitting in the closet for a long time,’ said another.

A third added: ‘What a beautiful dress for someone who is not engaged’.

Giving someone a promise ring signifies commitment and fidelity, and is usually gifted before the official engagement when the couple are young.

While they’re popular, it’s not an essential stage of moving forward in a relationship – and comments on Facebook pointed this out.

‘Aren’t promise rings past school just a way of getting out of proposing for a (long) while?’ Said one person.’

The woman in question is yet to respond to the uproar.