Gladys Berejiklian rules out running for federal seat of Warringah

Gladys Berejiklian has ended a week of speculation about her future by confirming she will not run for the federal seat of Warringah “or any other seat for that matter”.

The former NSW premier called into Sydney talkback station 2GB on Friday morning and said she would pursue a career in the private sector. “I’m going in a different direction,” she said. 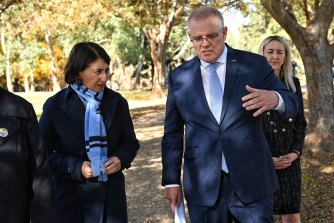 She said she was grateful to Prime Minister Scott Morrison and “so many other colleagues” who encouraged her to enter federal politics, and that she considered the idea “for a very short period of time”.

“It wasn’t something that I intended to do but out of respect for those people that I’ve got respect for I gave it some thought,” she said.

Ms Berejiklian said she has written to the Speaker of NSW’s Parliament to say she intends to resign as the member for Willoughby on December 30, and her political career would then end.

“When you close a chapter you always dwell on those things but I’m really positive about the next chapter of my life,” she said. “It won’t be in public life, it will be in the private sector.”

Mr Morrison had lobbied Ms Berejiklian to run for the northern beaches seat of Warringah for the Liberals and take on independent MP Zali Steggall, who ousted Tony Abbott in 2019.

That was despite the Independent Commission Against Corruption investigating whether Ms Berejiklian breached public trust or encouraged corrupt conduct in the course of her secret relationship with disgraced former MP Daryl Maguire.

The ICAC has not handed down its findings and Ms Berejiklian denies any wrongdoing.

On Friday, she told 2GB’s Ben Fordham she had received “amazing support and kindness” from the public since she resigned on October 1, when the ICAC revealed she was under investigation.

In making the case for Ms Berejiklian to join his team, Mr Morrison claimed she had been “done over” by the ICAC – which he called a kangaroo court – and treated shamefully by having details of her private life exposed.

Speaking to reporters on Friday morning, the Prime Minister said Ms Berejiklian had been a great friend to himself and his wife Jenny over the past few years.

“She’s going to go into a new chapter of her life,” Mr Morrison said.

“She’s been a trailblazer. She’s off to blaze a new trail now. But we wish her all the best for her future. And I know that she will continue to provide tremendously strong support to me and my team.”