And the “Cherry” singer, 26, made history on Friday, becoming the first man to ever cover American Vogue by himself.

In classic Styles fashion, he did so wearing a ball gown, a look custom-created by Gucci’s Alessandro Michele and paired with a cropped tuxedo jacket.

Photographed by Tyler Mitchell — the young superstar who memorably photographed Beyoncé for the magazine in 2018, becoming the first black photographer to shoot a Vogue cover  — Styles sports an array of gender-bending looks, including a Comme des Garçons Homme Plus blazer and kilt set, a Wales Bonner knitted sweater vest and kilted skirt and a black-and-white checked jacket by JW Anderson.

The team also tasked designer Emily Adams Bode with creating a custom pair of corduroy pants covered in emblems significant to Styles, including many of his tattoo designs and favorite imagery.

Other men who have covered American Vogue include Styles’ former One Direction bandmate Zayn Malik as well as Justin Bieber, who appeared alongside girlfriend Gigi Hadid and wife Hailey Baldwin, respectively. 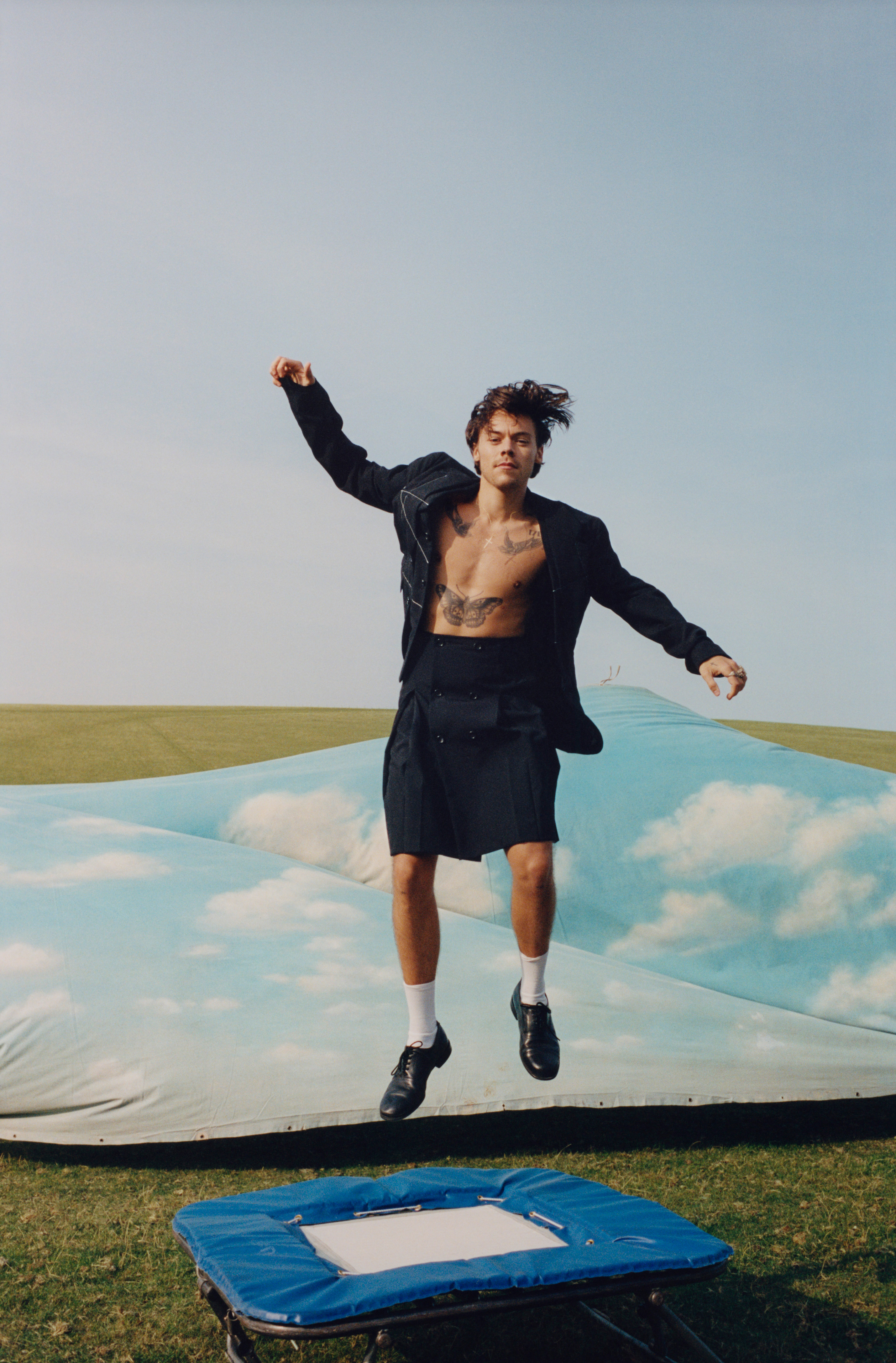 The superstar, who will appear in Olivia Wilde’s forthcoming thriller, “Don’t Worry Darling,” opened up about his fashion philosophy and fearless approach to dressing.

“You can never be overdressed. There’s no such thing. The people that I looked up to in music — Prince and David Bowie and Elvis and Freddie Mercury and Elton John — they’re such showmen. As a kid it was completely mind-blowing,” he told Vogue’s Hamish Bowles. “Now I’ll put on something that feels really flamboyant, and I don’t feel crazy wearing it.”

Indeed, Styles’ fans have fully embraced his colorful wardrobe, often recreating his looks and adding a pearl necklace and tons of rings, two staple accessories for his current era.

A patchwork JW Anderson cardigan Styles wore at a “Today” show soundcheck over the summer went viral on TikTok as fans created their own versions of the nearly $1,500 sweater; Anderson later released the pattern freely to assist eager knitters, and the original will be part of London’s Victoria & Albert Museum as a representation of how people spent their time during the coronavirus pandemic.

“I think if you get something that you feel amazing in, it’s like a superhero outfit. Clothes are there to have fun with and experiment with and play with,” Styles said. “What’s really exciting is that all of these lines are just kind of crumbling away. When you take away ‘There’s clothes for men and there’s clothes for women,’ once you remove any barriers, obviously you open up the arena in which you can play.” 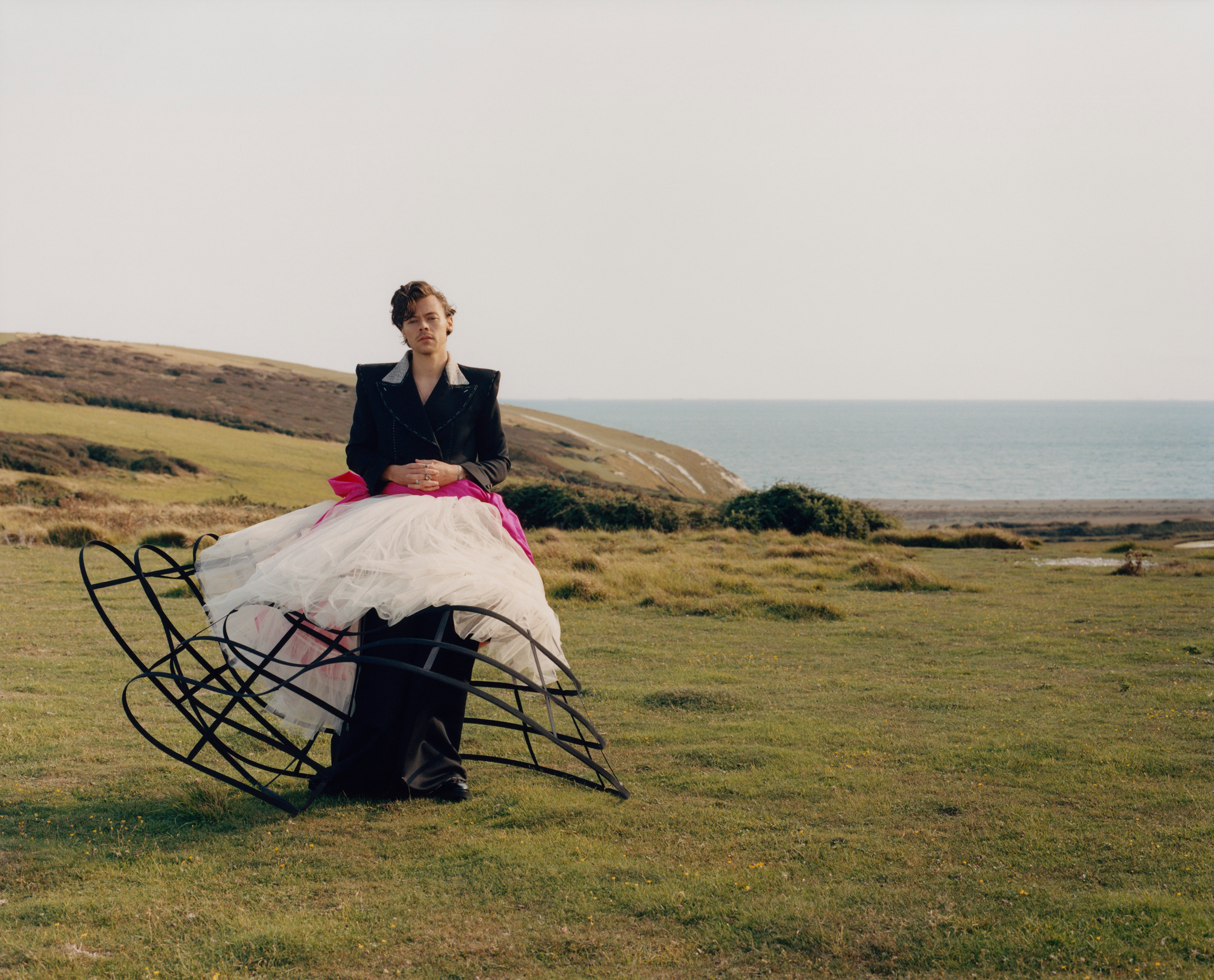 “It’s like anything — anytime you’re putting barriers up in your own life, you’re just limiting yourself,” Styles concluded. “There’s so much joy to be had in playing with clothes. I’ve never really thought too much about what it means — it just becomes this extended part of creating something.”

Vogue’s December 2020 issue will be available on newsstands nationwide on November 24.