Home » Lifestyle » Hello, blossom: A piece of Japan in the heart of Auburn

Hello, blossom: A piece of Japan in the heart of Auburn

I missed cherry blossom season in Japan this year so am scheduling a visit to Auburn. Auburn is a hotspot of cultural diversity: more residents here have at least one parent born overseas than anywhere else in the country. So it should not be a surprise to find a fine Japanese garden at its heart. And yet. 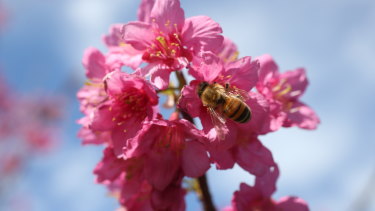 You can embrace the Tokyo-style flower festival frenzy of the “Hanami” weekends at either end of the festival.Credit:Louise Kennerley

In 1968 Auburn council's far-sighted chief engineer, Eric Black, proposed returning the land along the much-abused Duck River to public use. The river and its banks had for decades been a dump for rubbish and sewerage, and Black's revitalisation plan was for a mixture of sporting grounds and intensive gardens representing garden styles from around the world.

Perhaps he'd travelled to Hamilton Gardens on the north island of New Zealand, where a living museum of garden styles was established on a former rubbish dump in 1960. (Hamilton Gardens has since expanded into an impressively designed and impeccably groomed 54-hectare park on the banks of the Waikato River – see it if you get the chance.) 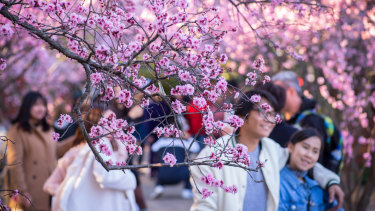 By the time the Auburn Botanic Gardens opened in 1977, Black's grand vision had been reduced to a Japanese garden surrounded by three different Australian habitats on 9.2 hectares, but it is still an extraordinary achievement. Black had never been to Japan, yet designed the garden himself, using postcards and books as source material. His plan follows the Japanese garden principle of a Garden of One Thousand Views, and it's quite an uncanny experience to walk through the views, all of which are vaguely familiar.

Like Japan's best-known stroll gardens, the Auburn garden is based around a lake. A pathway wraps around it, alternating between open and closed spaces and offering a range of tightly controlled views – the whole garden can never be seen at once. Water in the garden flows from east to west, which in Japanese garden tradition ensures happiness and health to visitors. It tumbles down a waterfall, is crossed by stepping stones and decorative bridges, laps at the posts of a floating tea house, mirrors a grand collection of trees and comes ashore on a sandy beach. 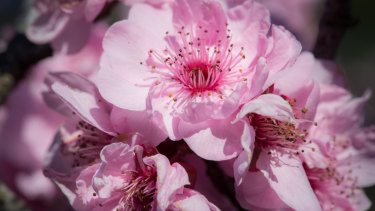 The garden is always worth visiting, but peak viewing time is during the Sydney Cherry Blossom Festival, from Saturday, 17 August to Sunday, 25 August, when the blossoms include cherry plums (Prunus blireana), Japanese flowering cherry (P.x serrata), Taiwan cherry (P. campanulata), purple cherry plum (P. cerasifera ‘Nigra') and peach (P. persica). For blossoms without the crowds book a ticket for a Serenity Viewing. Otherwise, embrace the Tokyo-style flower festival frenzy of the "Hanami" weekends at either end of the festival, and enjoy Japanese food trucks, sumo wrestling matches, a cosplay catwalk show and Hello Kitty makeover station.