Widespread floods have caused an explosion of carp numbers along the Murray-Darling Basin, raising concerns among farmers and experts that native fish populations will decline.

For Riverina rice grower Jeremy Morton, a small levee on his property now houses thousands of carp, all swimming on top of each other. While they generally call the area home, their numbers have grown exponentially in the past three months – when floodwaters started working through the river system. While he says it’s common to see the pests following floods, he’s never seen this many. 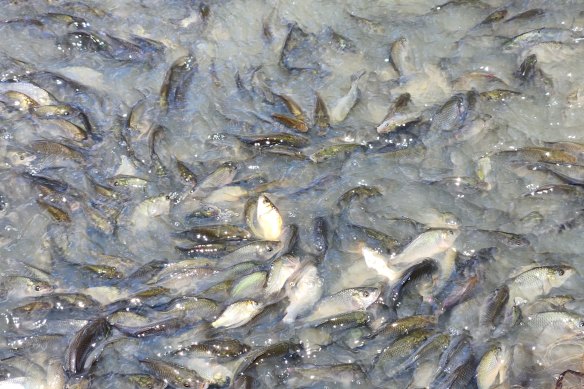 Water on Jeremy Morton’s farm in the Riverina has now been overrun with carp.Credit:Jeremy Morton

“It looks like boiling, bubbling up and boiling, all on top of one another, hundreds of thousands of carp in a tiny spot,” Morton, who is also the National Irrigators Council chairman, said.

Not only can the pests reduce water quality, cause damage to river banks, and contribute to algae blooms, they can also impact daily farm operations, such as blocking irrigation pumps. Carp thrive in floods, travelling to new floodplains and expanding their habitats. They also can withstand blackwater events – when a waterway is starved of oxygen – that wipe out native fish.

But carp are not the only invasive species that have boomed after years of heavy rainfall and floods. There have been reports of increased deer, feral pigs, brumbies and weeds following natural disasters, including the floods and the 2019-20 bushfires. Floods impact waterways, bringing a deluge of sediment and other runoff, but carps have a much higher tolerance for poor water quality.

Acting conservation director for the Invasive Species Council Jack Gough said following natural disaster events, like droughts, floods or fire, invasive species populations can boom. “The reason for this is that these events can help them spread, and because they often breed in large numbers and lack predators, they can take over ecological niches while the native wildlife are under stress,” he said.

“That is why we need state and federal governments to proactively increase funding for frontline pest and weed officers and research into new control techniques. We know if governments want to ramp up investment in response to natural disasters, they can’t roll it out overnight.”

Carp have been plaguing Australia since the 1960s, and now account for more than 90 per cent of fish biomass in the Murray-Darling Basin. They live in most of south-east Australia and some parts of Tasmania and Western Australia. Only the Northern Territory is carp free.

“The impact of carp on habitat and water quality is one of the greatest ecological threats to native fish recovery and healthy rivers in the Basin,” said NSW Irrigators Council chief executive officer Claire Miller said. She urged authorities to act quickly. 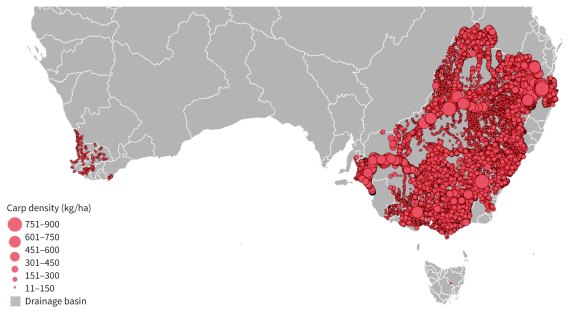 The biggest threat to Australia’s native animals since colonisation is introduced species. There are more than 200 invasive species that threaten Australia’s biodiversity, among them includes the European rabbit – which impacts 325 threatened land species, while the feral pig and cat both impact more than 100 threatened species.

Environmental science expert Jamie Pittock, from the Fenner School of Environment and Society at The Australian National University said there was no silver bullet when it came to carp control. While suggestions including releasing a herpes virus that only kills carp have been put to the federal government, Pittock said this would cost millions of dollars and needed to be done alongside other methods.

He added that poor infrastructure in dams was also a major challenge for breeding native fish. For example, many dams have holes in them that control cold water releases, but this is often 3-12 degrees cooler than the rest of the river, which will flow downstream for about 300 kilometres.

“Native fish need warm water to get frisky,” Pittock said. “There are a few technical fixes that can be retrofitted into dams, but these are expensive.”

Get to the heart of what’s happening with climate change and the environment. Our fortnightly Environment newsletter brings you the news, the issues and the solutions. Sign up here.