The nation’s top economists expect the housing boom to end this year, with many predicting potential regulatory action and coronavirus lockdowns will take some of the heat out of the property market.

The Sydney Morning Herald/The Age Scope mid-year survey of 22 leading economists, of which 18 provided housing predictions, shows a rapid slowdown in property price growth is expected in the nation’s two biggest capital cities over the next year and a half amid lockdowns to limit the spread of the Delta variant of coronavirus. 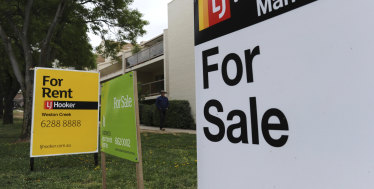 Regulators and lockdowns could start to weigh on property values.Credit:Graham Tidy

The panel on average believes the height of the property boom has passed, forecasting dwelling prices to end up 16 per cent for Sydney and 11 per cent for Melbourne at the end of this year.

Since the start of 2021, the average dwelling price is already up 17.7 per cent in Sydney and 11.1 per cent in Melbourne. This means a significant cohort are predicting prices to fall in the second half of the year, slowing annual growth.

The latest CoreLogic property price index shows a slowing in the monthly growth rate in July, though still at high levels, affected by lockdowns and prices getting out of reach of average households.

The most bullish forecasts on the panel were from the Commonwealth Bank of Australia’s Gareth Aird, who tipped 24 per cent growth in Sydney in 2021, and the Centre for Independent Studies’ Peter Tulip, who expects Melbourne prices will rise 19 per cent this calendar year.

The lowest growth expectation was from BIS Oxford Economics’ Sarah Hunter, who expects prices to rise 9.3 per cent in Sydney this calendar year, and ANZ’s David Plank, who forecast Melbourne property prices to increase 6 per cent in 2021. Three experts are forecasting modest price falls for both cities in 2022, including Market Economics’ Stephen Koukoulas, Macroeconomics Advisory’s Stephen Anthony and the University of Melbourne’s Neville Norman.

One of the factors that could cool prices is potential intervention from regulators to stop the market from boiling over.

“APRA should … focus on macroprudential regulations that limit the incentive to speculate on the housing market,” Ms D’Souza said, pointing to the introduction of limits on the proportion of interest-only loans banks were able to take on in 2017.

Corinna Economic Advisory’s Saul Eslake said the Reserve Bank should encourage APRA to tighten macroprudential controls as had occurred in some overseas markets. In New Zealand, some borrowers are now required to stump up deposits of 40 per cent.

“In addition, the government should – but won’t – make the tax system less generous to property investors by getting rid of negative gearing and scaling back the capital gains tax discount,” he said.

Westpac’s Besa Deda couldn’t rule out intervention to cool the market in 2022 but said so far there wasn’t sufficient evidence of slipping lending standards to justify the regulator’s involvement.

“We may see a broader range of measures this time round with [interventions] previously mostly focused on investors,” she said. Homebuyers have outpaced investors, but investment buyers are starting to get back into the market quickly.

“This resurgence in investor lending is unlikely to have gone unnoticed by the regulators.”

AMP Capital chief economist Shane Oliver said both APRA and the RBA should use macroprudential controls to tighten lending standards over the next few months.

“The housing market is booming with house prices up 15 per cent over the last year and housing finance at record levels,” Dr Oliver said, adding this could lead to financial stability risks. The RBA is monitoring lending standards but is yet to find deterioration in lending standards.

“The first thing to do would be to increase interest rate buffers but limits on high loan-to-valuation ratio lending and high debt-to-income ratio lending may make sense too,” he said.

However, Housing Industry Association chief economist Tim Reardon said the sector already suffered from over-intervention. He instead wants the government to focus on ensuring an adequate supply of land.