How ‘going green’ became the issue that unites the royals

On May 1 1980, a short item appeared in the Guardian’s diary pages alerting the nation to a shocking change – brought about by an increasingly confident Prince of Wales – in the grounds of Buckingham Palace.

“Further evidence keeps slipping out about the sort of monarchy we will have if the Queen copies Juliana of the Netherlands and bows out,” the column read: “an Eco King.” 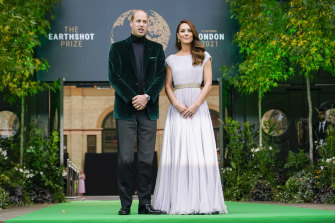 It then announced, with as much scorn as incredulity, that the prince had installed a “strange machine” at the palace. An early computer? Table football? A telephone that plugs into his geraniums? No, it was a bottle bank. The Prince of Wales had simply put in a bottle bank.

Four decades later, a lot has changed – not least the Guardian’s attitude to recycling. And the Royal family, far from containing one eco-warrior, is now so firmly camped on the front line of the green wars that if they were a political party, they’d possibly qualify as single-issue.

Take last week’s royal media coverage, for instance. It began with the Prince of Wales revealing that he runs his 1970 Aston Martin DB6 Volante not on petrol, but “surplus English white wine and whey from the cheese process”. Then, on Wednesday, the Duke and Duchess of Sussex became partners at a “sustainable investment firm” in New York City.

On Thursday, the Duke of Cambridge spoke ahead of the first Earthshot Prize – an initiative he set up with Sir David Attenborough to recognise inventive solutions to environmental problems, which unveils its inaugural winner today – and took a potshot at the Bezos, Branson and Musk space race, urging “the world’s greatest brains and minds fixed on trying to repair this planet, not trying to find the next place to go and live”. He also revealed his eight-year-old son, Prince George, picks litter at school and gets frustrated when more rubbish appears.

Meanwhile, in a rare public declaration of affection, Prince Charles has revealed how proud he is of his eldest son, “for his growing commitment to the environment and the bold ambition of [Earthshot]” .

Though the Queen rarely speaks her mind without careful consideration, she was overheard last week saying, when it comes to climate change, world leaders are all mouth and no trousers. “It’s really irritating when they talk but they don’t do,” she said.

In recent years, we have grown used to a royal family that sings out of harmony – sibling rows, divorces, departures, scandals. Often, the generational divide looks chasmic. But now, as they morph into the country’s most effective green pressure group, they may have finally found the one issue that unites them.

As the Queen said, however, actions speak louder than words, and a cynic might wonder how a family with dozens of enormous properties, who regularly fly around the world for meetings that could really have been held on Zoom, and who cannot move more than a few metres without the requirement of at least a motorcade or a helicopter, could possibly act with greater volume than they talk.

The cynic would have a point, but the same brush cannot be applied to all of them – and certainly not to the Prince of Wales for whom those bottle banks were just the start of a long and, at times lonely, fight to have the environment on the royal agenda.

“He’s the real deal, in the sense that he has got down on the ground and done a lot,” says Ian Skelly, the BBC Radio 3 presenter, who co-wrote 2010s Harmony: A New Way of Looking at Our World with the prince and Natural England chair Tony Juniper.

For two decades, Skelly has worked with the prince on speeches, and kept a close eye on his often unseen environmental work. “I can remember helping suggest lines and coming up with things 15 years ago for speeches about plastic in the sea. Nobody was interested, nobody took any notice – but he’d already noticed this huge problem that was developing,” he says.

Converting an Aston Martin to run on Brie or darning the same tweed jacket for years might steal headlines, but Skelly would point out that over several decades, Charles has quietly gone about launching dozens of serious environmental initiatives, from turning Sandringham fully organic to various charities.

“It’s an extraordinary legacy he has,” Skelly says. “For the Sustainable Markets Initiative (SMI), which he set up before the lockdown, he spent the past two years convening 250 of the world’s top CEOs, and international banks – all these people who sit on trillions of dollars worth of potential investment – and is trying to unlock that money to get it into sustainable technologies.”

That didn’t quite get the same number of column inches as the Duke and Duchess of Sussex’s sustainable investment news did this week, but you suspect the Prince of Wales doesn’t mind, so long as the SMI does its job. Powerful people trust the prince, Skelly reckons, “because they all see him as this person who has no agenda, not a competitor”.

As causes go, green issues are also relatively uncontroversial and apolitical – we can all get behind a healthier environment – which may be partly why so many royals are keen to make it “their thing”.

Not that the rest of the family aren’t passionate about the environment, of course.

The Duke of Edinburgh, while cynical about many matters considered modern or liberal, helped found the World Wildlife Fund and almost certainly instilled a love of the natural world in his children.

The Prince of Wales took that spark and ran with it, but so did Princess Anne, who has diligently mucked in running Gatcombe Park, her Gloucestershire home, for decades.

She too knows her stuff, not that she’s quite on the same page as her older brother about the climate emergency.

“I don’t even go down the climate change route,” she said. “I think the way people manage ground is part of the discussion… Climate changes all the time. It has done throughout the globe’s history, so there’s nothing new under the sun […] Somehow, we’ve got to learn that our kind of life is changing.”

The next generation is perhaps a little more urgent.

Princes William and Harry may not agree on much, but they appear to share a sense that they’d be remiss not to use their platforms to bang the drum for environmental causes – whether it’s conservation, climate solutions or sustainable industries.

In Prince Harry’s case, the Californian mawkishness and private jet use might dilute the message occasionally, but nobody doubts his sincerity. “I think the Prince of Wales is incredibly proud of both his sons and what they’re trying to do, but they do their own things, plough their own furrows. William’s initiatives are very much born of what his father has been doing for so many years,” Skelly says.

Even the Queen installed turbines in the Thames to power Windsor Castle a decade ago, and we know George has caught the bug. Slowly but surely, Charles – once cast as the lonely, oddball “Eco King” – has launched a revolution from within the palace walls.

“He’s astonishing,” Skelly says, “he’s spent, I’d say, 40 years now, frankly just listening to people, experts, and then feeding back what he learns into what he does.”

Later this month, the royal greens will descend en masse – the Queen, the Prince of Wales and Prince William – on Glasgow for the Cop26 summit. They’ll be both the star attractions and the loudest voices.

As pressure groups go, we could do a lot worse. They’ve come a long way from that bottle bank.

Make the most of your health, relationships, fitness and nutrition with our Live Well newsletter. Get it in your inbox every Monday.

Most Viewed in Lifestyle