Whenever I tell people my sexuality, the most common question I get, from both the straight and lesbian/gay community, is: ‘Do you prefer men or women?’.

It’s a question that not only erases my attraction to non-binary and gender fluid people, but also asks me to choose one of the two. More often than not this question comes on dates, as if the person is trying to suss whether I’m taking them for a ride, and I must secretly be a monosexual.

I came out as bisexual relatively late. I was 26 when I first properly entertained the idea that I might be attracted to people of the same gender as me. I was watching First Dates and there were two particularly sexy femmes on a date with each other.

At the point where they licked chocolate mousse off each other’s spoons I felt something stirring in my nether regions… This feeling wasn’t new to me – it was similar to the feeling I had in Year 10 when new girl Dawn* joined our school.

But at an all-girls school in 2005, even a liberal inner city state school, one of the worst things you could be was a lesbian. Plus, I knew I really fancied Lottie Wright’s* older brother so I couldn’t possibly be one.

No one had ever told me there was the option of being sexually attracted to boys and girls. But by 2016, and through watching First Dates (with my then-boyfriend), my horizons had expanded.

I googled: ‘I think I’m bisexual’ the following day, devouring the results as my understanding of myself shifted and unfurled. Reading about others discovering their fluid attraction I felt excited and a little scared about the new possibilities before me.

Initially, my understanding of bisexuality was that it meant ‘attraction to men and women’. So, when I first got asked the question: ‘do you prefer men or women?’ – usually by cisgender (identifying as the gender they were born as) men or women who I was on a date with – I used to agonise over the answer. I was only recently out, a ‘Baby Bi’, by which I mean I was in a ‘heterosexual’ relationship and hadn’t had any sexual or romantic relationships with women.

Did I have to say I preferred men just because they dominated the tally of previous partners? Was I a proper bisexual if I hadn’t had any same-gender relationships?

I used to stutter out answers like: ‘I suppose I tend to date more men’ and: ‘I don’t really know’ and leave these conversations feeling ashamed. Like a ‘bad’ bisexual. Like I was faking it. Like my non-heterosexual attractions weren’t real. 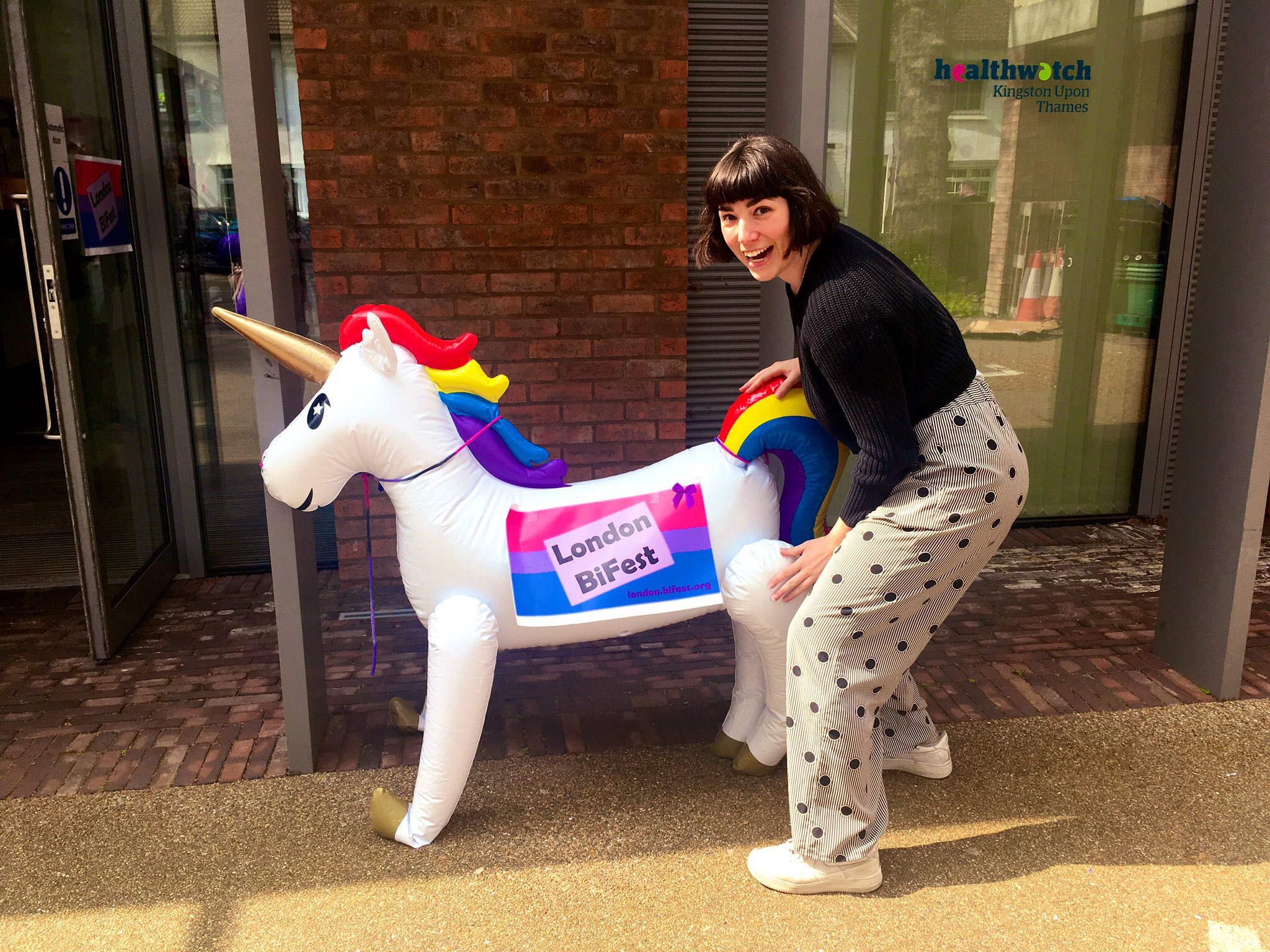 I went to my first Pride event as an out bisexual in 2018; three bi friends and I bought wristbands to march with the first ever official bi+ community float. It was an amazing feeling joining the community I’d found online for this momentous occasion. It was also the year that Get the L Out hijacked the front of the march, which left a sour taste in all our mouths.

By this time my understanding of gender, attraction and bisexuality had flourished thanks to finding this brilliant bi+ community online and a group of bisexual and Queer friends.

Later that night, I went to a Pride after party. I vividly remember watching someone across the room dancing who didn’t seem to fit a binary idea of gender. I had no idea what genitals this person had and it didn’t matter: I was intensely attracted to them.

I thought about that question: ‘do you prefer men or women’ and how it bulldozes through the concept of gender beyond the binary, and attraction beyond gender. Which is actually a well-known definition of bisexuality I now use.

It’s a question that erases what bisexuality is to me and erases many trans, non-binary and gender fluid identities in the process.

Fewer bisexual people are out than their lesbian/gay peers, we experience higher rates of discrimination within the LGBTQ+ community and higher rates of sexual and intimate partner violence. I believe this is because our fluid attraction is seen as a threat: it undermines the importance of the binary camps we’ve been divided into.

Being bisexual does in some respects then feel like a radically defiant act, one that rejects gender divisions and instead welcomes fluidity.

One thing I’ve learnt (as a regularly unsuccessful dater…) is there are all sorts of reasons you might not be attracted to someone.

If we’re going to focus on the physical, perhaps their jawline is too harsh – you like softer features; maybe their voice just inexplicably turns you off; their frame is too slender and you prefer a chunkier physique; or the genitals they have don’t arouse you… all fair enough. But I wish we’d stop ascribing certain features as definitively belonging to one gender or the other.

Pigeon-holing what makes a ‘man’ and a ‘woman’, rejecting anything that doesn’t ‘fit’, dismissing anyone who rejects the ‘rules’. It’s the result of a cisheteropatriarchal society (the combination of male, cis gender and heterosexual dominance in our socio-political systems) obsessed with drawing straight and opposing lines between two binary genders as a means of oppression.

If there are hard and fast rules on what it is to be ‘Male’ and ‘Female’ then we can be kept confined by those expectations – it’s a way of restricting people and it’s damaging to all genders.

I hope society can become more accepting of the lines blurring when it comes to attraction and gender. Become a little less rigid in their understanding of the two, with room for everyone to be more curious and open to trying new experiences if they want to.

I’m so over people asking me to pick whether I like men or women more.

The truth is, there are so many more interesting questions you could ask me about my life, so please stop asking the one question that erases my sexual identity and the existence of my non-binary friends and partners in the process.

Failing that, be prepared for me to respond to that question with a resounding: ‘Dogs, I prefer dogs’.

*Names have been changed